Pronunciation: [ ski-purr-kay ]The Schipperke is a small dog with a long history. These little sheepdogs of Europe are highly valued and remarkable in their personality. The are inquisitive and lots of fun for people who are playful in life. Originally called the Spits (or Spitske), the established breed name, Schipperke, is Flemish (from the Belgian region) and in English may be translated as "little captain."

Originally bred to be a smaller sheepdog that would have all the qualities of their larger brethren, the Schipperke was also bred to be a watchdog and companion. To this end, they demand constant human company and will bark a great amount to alert them to any dangers. They are not for families looking for their first dog, especially when it comes to obedience training. While they are adaptable to apartment life, they need a great amount of exercise to be healthy and happy in such a space. They are best for people who are experienced with highly intelligent dogs that need to not be bored, like to be mischievous, and that possess a small dog complex.

Below are a number of Schipperke facts to help you understand this breed:

Schipperkes are rapid-fire, highly agile, and only appear to be high-strung. Once you are over the surprise of their behavior, appearance, or both, you'll notice that they are distinct. Their neck hair may have been trimmed or been allowed to become a mane that seems to go all the way along the back, or their dark hazel eyes will have you in their beam, or the unusual ears will get your attention.

Like any remarkably intelligent breed, these dogs get bored easily. That can quickly lead to trouble, as these little devils won't stand to be bored for long. They'll start with the impish grin and quickly move on to doing things to get your attention. Ignoring these signs will prompt them to amuse themselves in any way possible. Schipperke dogs 101 should be: Don't let yours get bored.

Understanding these dogs will require more than browsing a Schipperke wiki. These dogs are loyal, communicative, and always moving, and you should understand their body language. A lot of research in Schipperke dog breed info is needed for potential adoptees.These dogs require a lot of exercise. They come from a relatively cold region in which they worked hard every day all day and in dangerous conditions. Over the centuries, they have been bred to be hard-working, extremely active, and very strong dogs that cannot be left alone in the house all day.

The beginning of dog shows can be traced back to the early centuries of Schipperke history, which itself is said to have originated in the 14th century. This Belgian breed is thought to have been produced out of necessity rather than nature or novelty. French laws prohibiting the hoi polloi from having large dogs appears to have been the cornerstone for the breed. Only the aristocracy were allowed dogs over a certain size, and sheepdogs were (and are) big dogs. They also had skills required by farmers, herders, and craftsmen. The Schipperke was one of the breeds that emerged from the smaller regional sheepdogs.

In the late 17th century, guild craftsman held one of the world's first-ever dog shows. The express intent was to compare and compete Schipperkes among these early artisans, and it was held in Brussels at the Grand Palace in 1690. The show was a hit, and it helped popularize the breed. For nearly two centuries afterward, the renown of the Schipperkes was maintained. In 1840, the first European Dog Show was held in Brussels. Unlike the prior shows where just one breed was exhibited at a dog show, many breeds were invited and appeared in this one — but not any Schipperkes. Some decades later, in 1882, the breed was finally formally recognized by none other than the Royal Cynological Union St-Hubert.

A few years later, in 1888, the Belgian Schipperke Club was formed. Now known as the Royal Schipperkes Club Belgium, the founding members desired to maintain and protect the breed. It was at this time that there was also the campaign to clarify the dog's heritage. Until then, the dogs, while known to have come from sheepdogs, was often regarded as a Spitz-type breed. Endeavoring to undo the confusion regarding these proto-"Spits" dogs and similar-looking German Spitz Dogs, the name "Schipperkes" was formally adopted and Spits was eventually abandoned.

Your Schipperke is a unique looking little dog-- if you consider her overall shape, she is quite thick and square. Her most unique physical characteristic is most definitely her coat which forms a "cape and trousers". The super dense, black fur actually exists in 3 separate lengths; it's short on the face, ears, front of the legs and the lower portion of the back legs while the fur around the neck and on the chest, back and thighs is long. Every where else on the body is considered to have medium-length fur. The mischevious and alert look in her little dark eyes perfectly complements the foxy shape of her head. The small ears are triangular and erect. The Schipperke tail is docked and that remains is not visible through the long hair that makes up the "trousers".

For the most part, Schipperkes are black. They can be other colors, and they shouldn't be confused with a Pomeranian. Confusing a Pom for a white Schipperke apparently happens often enough, and has for some time. You can find some late 19th century and very early 20th century books and magazine articles about Schipperkes and their coat colors. You will probably find there has apparently always been a controversy regarding color.The other colors that may occur in the Schipperke are: 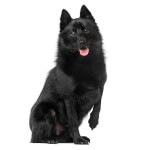 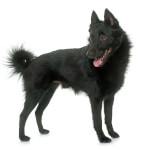 Due to the average Schipperke size, these dogs can be confused with other breeds. (If a Schipperke has a coat color other than black, it can increase the chance for confusion.) Males and females have some basic differences. The male Schipperke, full-grown, is 11 to 13 inches tall. Females are just a short bit, well, shorter: 10-12 inches. Regarding Schipperke weight, there is much more difference. Fully grown males weigh about 15 to 18 pounds and females tip the scales at 11 to 15 pounds.

10-13 in
*Height is measured in inches from the front paws to the top of the shoulder while the dog is standing on all four legs.
11-18 lbs

When it comes to varieties in Schipperkes, color is the only variation. Any other such variety may well be a marketing ploy or a mixed breed.

The varieties of Schipperkes that are not black have long been debated. Most major kennel clubs, such as the American Kennel Club, the FCI, and the Canadian Kennel Club refuse to recognize non-black Schipperkes. Only the big clubs in Great Britain — the United Kennel Club and The Kennel Club (KC) — formally acknowledge this breed's other colors, and sparingly at that. The KC states that the Schipperke is "usually black but other whole colours [are] permissible." Even this small comment seems to have taken a huge and long battle to be in a breed standard. As far back as the late 1880s, Belgians declined the original breed standard to include Schipperkes that were not black. Of the other hues, it seems that the brown varieties are typically found in Holland. Puppies born with some white tend to shed those white hairs when their adult coat grows in.

There are no mini Schipperkes or short-haired ones and certainly no toy types. There may be runts, or the unusually small one, or even a confusion with a Pomeranian. (In French, the Pom is called a Spitz Nain, sometimes misspelled as "Spits Nain.")

The Schipperke temperament is an apt one, but it's not an easy one for people who want a lapdog or other pet that is convenient for a few minutes of attention daily. These dogs are there to work with you and they prefer to be in constant communication even if they are not always visible. They will always know what's going on, will let you know if anything is ever amiss, and will not back down from a fight no matter the odds. Loyalty, devotion and protection are three primary characteristics of this breed's personality. They are highly adaptable, and all of these traits together make for a great guard- and watchdog for apartment dwellers. They are only slightly aloof as they tend to quickly assess whether a person is friend or foe. They can be a bit mischievous too, especially when they are bored. They are sensitive creatures and must be handled delicately no matter what.

Below are pictures and images of the Schipperke. 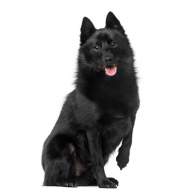 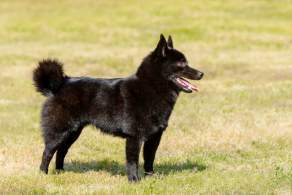 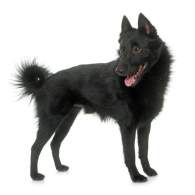 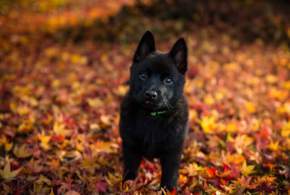 Living with a Schipperke is not for everyone. These dogs are constantly in motion, constantly communicating and constantly needing to know everything. They bark a lot, and then some. While they are not unfriendly toward new friends, they may take their time being friendly. They are also prone to separation anxiety, but only moderately so.

Apartments are fine for these dogs, but they are adaptable to most anything.  Whether it's running far afield in the woods, or guarding barges, or just making sure your tiny NYC apartment is well-watched, this breed can do it. They can quickly become cleverly destructive, however, if allowed to be bored.  They do have a tendency to roam and explore.  They have a strong urge to chase down cats and small pets.

If you are wondering about the Schipperke hypoallergenic aspects, they dogs are definitely not hypoallergenic and they do shed a lot as well as have two annual coat blowouts.

The Schipperke is one of the blessed breeds that has been kept pure with few heritable health issues. Granted, there are a couple concerns, as there is with any long-standing dog that has been maintained primarily via inbreeding. There is even one that is said to affect approximately 15% of the population. As with any breed, the breeder have all the health papers present so that any prior problems (if any) with hips, eyes, and thyroid are known. Schipperke ailments are discussed in the Care section.

Here are some of the complications the Schipperke:

Schipperkes have an average lifespan of 12 to 15 years, and it is not unusual for them to live longer.