The Smooth Fox Terrier is a medium-sized, short-haired dog breed that is predominantly white in color, with patches of brown and/or black. This breed is genetically similar to the Wire Fox Terrier (and until the twentieth century, Smooths and Wires were considered variants of the same breed). Smooth Fox Terriers are lively, bold, and intelligent; while they're affectionate toward children and families, the same may not be said for other pets. Dogs of this breed typically require a moderate amount of maintenance. Though they shed little, they will need moderate training and a good deal of exercise.

As its name suggests, the Smooth Fox Terrier is a member of the Terrier group of dog breeds. These dogs originated in England centuries ago, and were utilized as hunting dogs; they were prized for their abilities to go to ground and enter the dens of foxes and other small predators to drive them out to the hunters. These scrappy (but affectionate) little guys are best suited for busy families, particularly ones with few other pets; though they can be trained to socialize fairly well with other animals, Smooths can be confrontational with other dogs, and their high prey drive will cause them to chase (and injure) cats and other smaller pets.

A few Smooth Fox Terrier facts: they're on the smaller side of medium-sized, with smooth, hard, short- to medium-length coats. Life expectancy is 12-15 years. Here are some benefits and drawbacks of owning this breed:

Some basic Smooth Fox Terrier information: the breed is smallish medium-sized, with a smooth coat that is predominantly white, with patches of brown and/or black. These hardy, healthy dogs have feisty personalities, and their self-confidence makes them both willing to explore and dominant around other pets. Intelligence-wise, Smooths are pretty quick learners, but their spunky temperaments may require some firm, consistent training techniques.

Smooths' fearlessness can be both good and bad: while they make great watchdogs, and normally won't hesitate to chase a burglar, they will also chase a squirrel until they either catch and devour it or fall over from exhaustion. This bravery can also get them into trouble with other dogs, as a Smooth will gladly pick a fight with a bulldog--and probably lose. It goes without saying, then, that dogs of this breed will need supervision (usually by way of a leash) as often as possible.

But with their feistiness comes a great amount of energy. While not super-strong, Smooth Fox Terriers are incredibly lively and playful; their years of fox hunting affords them great endurance, so they will undoubtedly tire out...well, never. Animal Planet's Dogs 101: Smooth Fox Terrier is a fun video if you'd like some additional info.

Smooth Fox Terrier history, and the actual origin of the dog, has not been closely documented, but the breed has existed in England since the eighteenth century, if not longer. This is known to be true because of a man named General Thornton, who in the late 1700's painted a portrait of his dog, a Smooth Fox Terrier called Pitch.

Until the twentieth century, common understanding was that the Fox Terrier had two varieties--the Smooth and the Wire, the only difference being the coat texture. Historians believe Fox Terriers were developed by crossbreeding several terrier breeds like the Welsh Terrier, the Fell Terrier, the Bull Terrier, and possibly the Beagle. Through the years, these dogs became known for their "fox bolting" skills, in which they would enter fox dens (something the larger fox hounds couldn't do) and drive them out to the hounds and the waiting hunters. And the more white the Fox Terrier was, breeders learned, the more valuable it was, as the hunters could more easily discern the white dogs from the actual foxes as they ran from the den. The mostly white coat, then, became highly prized among these still-developing dogs. Eventually the Wire and Smooth varieties emerged, and Smooths became known for their abilities to hunt rats and other vermin as well as foxes.

Starting around 1900, Smooth Fox Terriers became popular in America and other parts of the world. One of the most notable Smooths from this time was Nipper, a dog that was made famous by an image of him staring into the horn of a phonograph machine; the image was later used as a logo by the RCA Victor company.

Though the Fox Terrier (which included both the Smooth and Wire varieties) had been recognized by the American Kennel Club in 1885, the organization recognized Smooths and Wires as separate breeds in the late twentieth century.

13-16 in
*Height is measured in inches from the front paws to the top of the shoulder while the dog is standing on all four legs.
15-19 lbs

The Smooth Fox Terrier sees little variation in the physical characteristics within its own breed. There is, however, some confusion and debate between the Smooth Fox Terrier and its closely-related cousin, the Wire Fox Terrier. Until the twentieth century, Smooths and Wires were considered varieties of one breed, but the two are now classified as distinct breeds unto themselves. Though Smooths and Wires are extremely similar in almost every physical aspect, there are slight genetic differences. Besides the differing coat textures, Wires typically have more square-shaped heads, while Smooths' heads are normally the shape of a narrow wedge.

Likewise, Smooths have little variety in their coat texture and colors: short, smooth, and hard, with white and patches of a darker color. Occasionally a Smooth Fox Terrier will birth a litter of puppies that includes a wire-coated dog. This occurrence is rare, though, and is becoming even more so as time passes.

In regards to size, Smooth Fox Terriers also see little variation. Practically all Smooths are smallish medium-sized, and average 15 inches in height and 17 pounds in weight. Breeders often offer "Miniature Smooth Fox Terriers" for sale, and though those dogs are indeed smaller, they're usually crossbreeds; breeders often cross Smooths with Toy Fox Terriers, a similar (but smaller) breed, to create what they call Mini Smooths.

Lively, intelligent, personable, athletic, and often stubborn, the Smooth Fox Terrier temperament is one of activity and courage. Dogs of this breed are highly inquisitive, and they're extremely confident--often to the point of getting themselves in trouble with larger dogs and moving objects. Smooths will need plenty of mental (and even more physical) stimulation to keep their busy bodies and minds occupied. They are great companions to children, and will be extremely playful with them--though they may not socialize as well with other household animals.

When it comes to training, Smooths' intelligence makes them fast learners, but they may be stubborn and willful (as most terrier breeds are); experts recommend consistent, repetitive, reward-based training for these dogs.

One advantageous characteristic to Smooth Fox Terriers' boldness is they make excellent watchdogs, and they won't hesitate to sound a vocal alarm (and often give chase!) when confronted with a potential threat.

Below are pictures and images of the Smooth Fox Terrier. 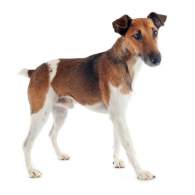 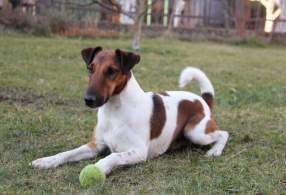 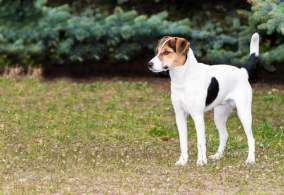 Smooth Fox Terriers are healthy overall, but may suffer from various medical issues. One problem is deafness, which is most common to white (or mostly white) animals. The reason is purely genetic: the DNA for pigmented fur and hearing ability come from the same stem cell source, so animals with no color in their fur are sometimes also born deaf. This issue, though, is fairly rare in this dog breed.

The following dog breed registries and organizations recognize the Smooth Fox Terrier as a dog breed: