Originally bred for war, the mastiff is one of the heaviest and oldest dog breeds in the world. While the mastiff's ancestors were fierce war dogs, the mastiff today has a docile kind-hearted temperament making the breed perfect for any family that can manage the dog's size and doesn't mind a bit of drool.

The breed is known for their companionship and enduring care and love for their family. They make excellent guard and watch dogs, as most intruders (and guests) are intimidated by a 220 dog watching them approach their property. The dog's size does take a toll on their body as the average mastiff lifespan is roughly 60% the lifespan of the average dog.

Below are the characteristics and traits of the mastiff dog breed.

There is no doubt that the mastiff is considered a giant dog breed. Males can often exceed 220 pounds and be as tall as 30 inches from ground to shoulder. In 1989 a mastiff named Zorba set the world record by weighing 323 pounds. The potential size of an adult mastiff should be taken into consideration before adopting a mastiff into your family.

Although mastiffs can be very intimidating dogs, they are actually good natured. The breed is known for their courageous spirit and should never be shy or aggressive, but if they feel their family is threatened they will stand between you and the threat. Mastiffs love being around children, however they should be supervised as their large size can easily overwhelm a child. They do well with other pets, but do best when raised with other household animals.

English Mastiff history dates back as old as (or older than) man itself. True Mastiff origin begins with a type called the Molosser, a huge guardian dog that likely populated the mountains of Asia. Other descendants of Molossers are the Saint Bernard, the Dogue de Bordeaux, the Rottweiler, and even the Pug.

The history of the Mastiff (or "history of the English Mastiff") navigates through previous cultures including the Greeks, Egyptians, and Carthaginians--all of whom used these massive dogs to guard property, fight in war, and as entertainment fighting lions. As the centuries passed, Mastiff-type dogs accompanied troops throughout Europe and Asia.

Actual English Mastiff origin is recorded as early as the 1400s, when the dogs were known to guard British palaces and estates. Starting in the 15th century, a kennel in Cheshire County, England called Lyme Hall began breeding and refining these dogs; the Lyme Hall Mastiffs were bred for centuries, and are the basis for the Mastiff as we know it today.

In the 19th and 20th centuries the Mastiff faced extinction multiple times (mainly due to dog fighting and World Wars I and II), but a few were able to survive. In the U.S. the breed, which probably made its way over from England during colonization, gained popularity in the late 1800s; the American Kennel Club recognized the Mastiff in 1885, and the Mastiff Club of America (which is still the official U.S. breed club) was created in 1929.

Today the Mastiff ranks 29th out of 195 recognized AKC breeds.

As the largest dog breed that exists, the Mastiff exudes power and confidence. If any breed is reminiscent of a professional wrestler--and a large one at that!--the English Mastiff is it.

But exactly what does an English Mastiff look like? The large body is streamlined and powerful. The Mastiff skull is "squared off"; Mastiff ears are rounded and hanging. (Some people get English Mastiff ears cropped--but for the English Mastiff, cropped ears are by no means necessary.) Mastiff eyes can be different shades too: brown is most common, but a blue-eyed Mastiff is possible. The chest is broad, shoulders muscular, legs long and straight, and Mastiff paws are large and thick. The tail is long, curved, and low-hanging.

Below are the standard colors for the mastiff dog breed. 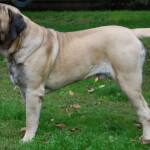 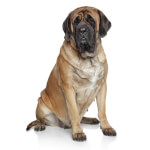 And exactly how big do Mastiffs get? For English Mastiff size comparison, these dogs are six feet or more in length, and can be up to eight feet long; the average for all dog breeds is only about three feet.

How much do Mastiffs weigh? Female Mastiff weight starts about 120 pounds; Mastiff average weight is 175 pounds. But Mastiff dog weight can reach 250 pounds or more--and the heaviest English Mastiff known was over 350 pounds!

English Mastiff height starts at 27 inches for females, and 30 inches for males.

27-32 in
*Height is measured in inches from the front paws to the top of the shoulder while the dog is standing on all four legs.
120-220 lbs

Within the specific Mastiff (or English Mastiff) dog breed, there's not too much variety in physical features. Some Mastiffs may differ some in weight, head size, tail length, etc., but these variations are naturally occurring and do not represent a specific sub-type.

The English Mastiff coat is consistent too: short and double-layered. The long-haired mastiff does exist, but is a different mastiff type (see below).

More generally, the word "mastiff" can describe either a specific breed (often designated with a capital "M"), or a breed type. In regards to type, more than a dozen large mastiff breeds are known (with some breeds of mastiffs recognized by kennel clubs, some not). Here's a comprehensive list of breeds of mastiff dogs:

Powerful, dignified, docile, courageous, and even lazy, the English Mastiff dog temperament is a combination of calmness and strength. These dogs--once they mentally mature, which can take three years or more!--are normally laid-back and even-tempered. But they're also incredibly protective, and will defend loved ones (usually with success) if the situation arises.

As to training, these dogs learn tasks or commands at only a moderate pace. Training methods should be positive (and never harsh), and may require a few repetitions.

One of the best Mastiff traits, meanwhile, is the breed's watchdog abilities. While they don't bark very much, Mastiffs will usually investigate strange sights and sounds--and can neutralize many potential threats with their size alone.

Are Mastiffs good with kids? Is the English Mastiff a good family dog, in other words? In reality, a Mastiff with kids is great--but some precautions should be taken.

First, it's best if Mastiffs and kids grow up together, so they can socialize from a young age. Second, children (regardless of age) will need to be taught to treat the big dog with respect; rough handling, even if accidental, could have disastrous consequences.

And an English Mastiff with a baby, whether infant or toddler, will require extremely close supervision. Though the Mastiff won't purposefully hurt a small child, the dog's huge size can cause injuries if it sits in the wrong place--or even wags its tail too hard.

Overall, Mastiffs get along fine with most other pets--but they may try to dominate other dogs (especially those of the same sex). An English Mastiff and cats won't be a problem, nor will small animals like birds and rodents.

Below are pictures of the Mastiff dog breed. 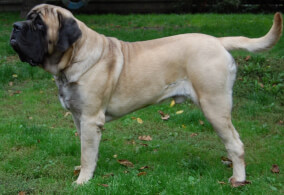 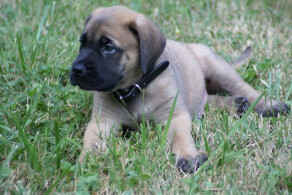 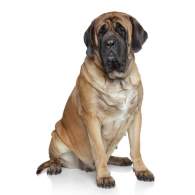 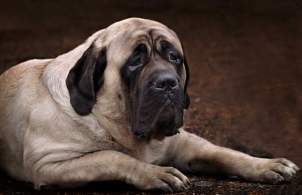 Owning a Mastiff can take patience and work. As English Mastiff owners know, these dogs drool heavily, are gassy, and their sheer size makes them like bulls in China shops, as they'll knock over valuables and simply fill up entire rooms. Even so, having a Mastiff as a pet can be a wonderful thing--because as anyone owning an English Mastiff can attest, their size and protective instincts provide plenty of safety.

Living with an English Mastiff is best in a home with a yard, though these big dogs will be okay in apartments as long as they get some daily exercise. Regardless of accommodations, the Mastiff should also live inside with its people instead of out in the yard. And for obvious reasons, a Mastiff should never be chained up, as doing so is a dangerous recipe for aggression and destruction.

And are Mastiffs hypoallergenic? In short, they are not. The English Mastiff hypoallergenic tendencies are basically zero, thanks to a double-layered coat that sheds seasonally. Allergy sufferers will probably need to find another breed.

Below are health issues and concerns most common in Mastiffs

The following dog breed registries and organizations recognize the Mastiff as a dog breed: