The Double Doodle is a hybrid breed which is a cross between the Goldendoodle and the Labradoodle or various combinations of the Golden Retriever, Labrador Retriever and the Poodle. This mix has also been called the North American Retriever and Golden Labradoodle. This breed is intelligent, well-rounded, and has been cited as an affable family pet.

Below are details and specs of the Double Doodle dog breed.

The double doodle is considered a large dog breed. Adult double doodles will generally be 20-24 inches tall (from ground to shoulder) and will weigh between 50-80 pounds. Their size and build makes them sturdy dogs without being so large they pose a threat to small children or fragile furniture.

Double doodles are excellent dogs for children and other household pets. The breed overall makes a great family pet, however due to their friendliness they will make a poor watch dog or guard dog as they will greet strangers and trespassers warmly.

The maintenance of the double doodle is largely dependent on which parent breed the dog inherits its coat characteristics from. Poodle genes will prevent the dog from shedding, but they will require frequent haircuts and brushing to keep the coat healthy. Labrador retriever and golden retriever coats both shed heavily and will need to be brushed daily to keep the coat free of dead hair. The double doodle will have a lot of energy, so 30 minute walk will be necessary at least one to two times per day. It is unlikely the breed will meet their exercise requirements playing fetch in the backyard and will need further physical stimulation.

The Double Doodle is a fairly new dog breed and because of this the breed does not have a very detailed history. It is likely that Double Doodle was first intentionally bred in the last few decades when the popularity of designer hybrid dogs increased.

Traits that are common amongst all Double Doodles are a long coat and tail, dark button eyes, a black nose and floppy ears that fall onto the cheek or side of the head. The texture of the coat can vary considerably depending on the traits inherited. Some of these dogs will have silky, wavy coats ala the Golden Retriever, while others may have more coarse, wiry coats like that of the Poodle.

These dogs can have a variety of coat color possibilities due to their mixed heritage. The most common colors are white, black, black and tan, brown, and gold. 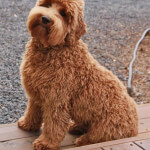 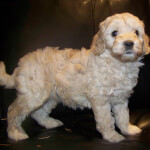 The Double Doodle is considered a large sized dog breed. An adult Double Doodle will weigh between 50-80 pounds and stand 20-24 inches tall from ground to shoulder.

20-24 in
*Height is measured in inches from the front paws to the top of the shoulder while the dog is standing on all four legs.
50-80 lbs

The Double Doodle is a doozy of a dog when it comes to explaining variations — and not just because of the multiple claims regarding who bred which dog with what in one country or another. As this "hyper"-hybrid is the cross-breeding of two hybrids (the Goldendoodle, which is a Golden Retriever / Poodle cross, crossbred with a Labradoodle, which is a Labrador Retriever / Poodle cross), some breeders consider it an F3 from the start whereas other breeders claim it is a mere hybrid in itself and thus starts at F1. Since the American Kennel Club (AKC) states that a hybrid cross production must reach F7 before even being considered a pure-breed. With that in mind, it can be easy to understand why two different hybrids being crossbred should technically produce an F3 (or at least an F2), but not an F1.

As such, the typical F1, F2, etc. generations may not apply to Double Doodles — at least not just yet.

Some breeders may advertise Mini Double Doodles; it is most likely the case that a size of Poodle smaller than a Standard has been used (Medium, Miniature). However, puppies irresponsibly bred down to achieve a certain size often come with serious health issues.

Traits that appear common amongst all Double Doodles are intelligence and sociability. These dogs are family oriented and love to be around people, including children. As long as they are properly socialized, Double Doodles should not have a problem getting along with other dogs or family pets such as cats. Consistent, firm training should be started as a young age to get the most out of this bright dog. Fortunately, these dogs are willing to please their owners and training should not present much of a hassle. Though these dogs are playful and like to run around, they should be fine in smaller living environments as long as they receive proper attention and exercise.

Double Doodles are known to do exceptionally well with children. They are gentle and sweet towards small children and should not present much of a knocking-over threat.

These dogs can get along with other pets without issues. However, they do best if introduced to other animals at a young age.

Dogs of this breed are usually quite friendly and inviting. Sometimes a Double Doodle will bark to alert their owners of a stranger but often it will greet a new person affectionately; owners looking for an intimidating guard dog should probably look elsewhere.

Below are pictures of the Double Doodle dog breed. 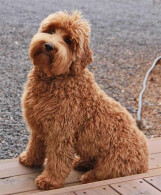 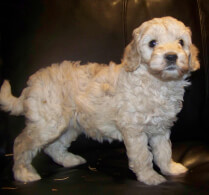 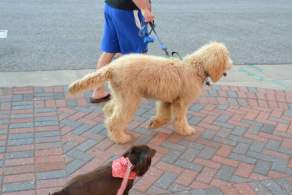 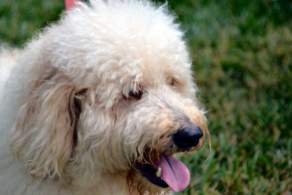 You can expect this dog to be a medium maintenance breed. They will require a moderate amount of exercise and their coats may require frequent care, depending on which breed they inherit from.

The Double Doodle can inherit the coat from either the Poodle or the Labrador/Golden Retriever. Double Doodles that inherit the Poodle coat will likely be hypoallergenic and won't shed much but will need their coats clipped regularly and brushed each day to keep the hair from becoming tangled.

Individuals that inherit the silky Retriever coat type will need to be brushed at least 3 times a week to prevent mats and tangles. This coat type will shed year round so owners should consider investing in a nice vacuum cleaner to help keep fur from piling up around the house.

These dogs are fairly energetic and should be exercised daily to prevent their excess energy from being used to fuel unwanted habits such as chewing, digging, and barking. Playing fetch in the yard will not be enough; these dogs will need a moderate to long walk each day.

Given their aptitude for games, a home with a yard would probably be a Double Doodle's first choice, but these dogs can adapt to a wide variety of living environments. They can call somewhere home whether it's an apartment or a large estate, as long as they are able to meet their exercise requirements.

Double Doodles are best in moderate climates. They are not fans of cold weather and should be kept inside or somewhere warm in cooler climates.

As a hybrid dog breed, the Double Doodle will have more genetic diversity than its purebred ancestors which helps with the breed's health and hardiness. However, the breed does suffer from health issues common in both the Labradoodle and the Goldendoodle, including hip dysplasia, cataracts, and bloat. The life expectancy for this breed is 12-15 years.

Below are common health issues with the double doodle breed.

The following dog breed registries and organizations recognize the Double Doodle as a dog breed: