The dalmatian dog breed is one of the most recognizable breeds in the world. Besides the breed's good looks, dalmatians are highly intelligent dogs which have been used for various jobs since the breed's origin.

Dalmatians make excellent family dogs and are spectacular for active owners. Since the breed was originally bred to run alongside horses and carriages, dalmatians have ample stamina to keep up on long hikes and runs.

The Dalmatian is a member of the Non-Sporting group of breeds; dogs of this breed have been around for centuries, and have been utilized in a wide variety of activities including herding, retrieving, coach/carriage guarding, in circuses, and numerous others. These versatile, active, intelligent dogs are best for active families who are willing to meet Dalmatians' high exercise requirements.

Some Dalmatian facts: they're medium- to large-sized (averaging 22 inches in height and 50 pounds in weight), with short-haired, fine coats in the classic "white-with-black-spots" color pattern. Here are some additional qualities of the Dalmatian, both good and bad:

Dalmatians are large breed dogs. The breed's average is 19-24 inches tall (from ground to shoulder) and 55 pounds. This size makes it easy for the breed to remain agile without being too small to perform its guarding duties.

Dalmatians are an alert and highly intelligent dog breed. They have a strong desire to please their owners and are willing to learn making them ideal family dogs. The breed does well with children and are excellent with animals (especially farm animals). The chances are if you've been in a city with a horse drawn carriage, there was a dalmatian riding in the carriage as well.

Dalmatians are considered a clean dog breed. Their coats repel most dirt and the breed doesn't develop the "wet-dog" smell that many people dislike. The breed sheds year round, so they need to be brushed frequently to keep loose hair at a minimum. Due to the coats self-cleaning properties, dalmatians only need to be bathed a few times per year. The breed has high amounts of energy and will need moderate to high amounts of exercise to meet their fitness needs.

Dalmatian origin is a bit mysterious--and a little misleading as well. Dogs of this breed, historians believe, did not originate in Dalmatia, a region in the southern part of present-day Croatia, as the breed name suggests. Dalmatian history is in fact believed to be as old as civilization itself. White dogs with black spots appeared in ancient Egyptian cave paintings, and the breed--or at least a Dalmatian predecessor--is thought to have traveled with nomadic gypsy tribes in Europe, Africa, and Asia.

Dalmatians' supposed Croatian origin likely stems from paintings found in that nation in the early 1600s, in which Dalmatians are portrayed. The official breed name was coined in 1790 by English author Thomas Bewick, whose book A General History of Quadrupeds described the "Dalmatian" as a medium-sized dog that was white with black spots.

Whatever the case, dogs of this breed have had a long, versatile working history. They've been utilized as hunters, shepherds, even circus performers--but the breed really grew in prominence in nineteenth-century England, when Dalmatians were known as excellent "coach dogs." Dalmatians would accompany horse-drawn carriages, clearing a path for them and guarding the horses when the carriages were not being used.

In the U.S., meanwhile, Dalmatians have a bit of a different association--with firehouses. These dogs have for decades served as unofficial mascots of American fire departments; the dogs would accompany firemen (first in the horse-drawn fire carriages, then on trucks) to burning buildings, aid in search and rescue, and become firehouse watchdogs during idle hours. The Dalmatian breed was further immortalized in British author Dodie Smith's children's book The Hundred and One Dalmatians, which is the basis for the 1961 Disney film of the same name.

Currently, the Dalmatian population is relatively small worldwide. These dogs are sometimes still used in work capacities, but mainly serve as family pets.

The medium- to large-sized Dalmatian has a muscular, streamlined body that is almost "rangy" in overall appearance.

The breed's body is typically a bit longer in length than in height. Its head is wedge-shaped, and its eyes are wide-set, almond-shaped, and come in various shades of brown and blue. (Some Dalmatians have heterochromatic eyes, meaning they are different colors.) Dalmatian ears are quite large, triangular, and hanging; the chest is narrow, the torso is long, and the legs are straight and long as well. (The rear legs are angled backward somewhat, contributing to the breed's streamlined appearance.) The Dalmatian's tail is fairly long, thin, and either straight or slightly curved.

The Dalmatian coat--probably its most recognizable feature--is a white base with darker spots, with the spots typically 1-2 inches in diameter. The fur is short-haired and sleek, and sheds year-round.

Practically all Dalmatians have white coats with darker spots. Dalmatians' spots are usually black or dark brown (liver), but a few can have spots that are lemon or orange. A fewer still have spots in multiple colors; some are black and some are liver, for example. Dalmatians with multi-colored spots, in which each spot is multi-colored (normally in a brindle pattern), are also possible. 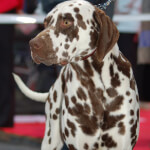 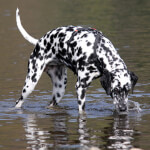 Dalmatian size is on the smaller end of large-sized. Dalmatian height at the shoulders is 19-24 inches; Dalmatian weight is 48-55 pounds.

19-24 in
*Height is measured in inches from the front paws to the top of the shoulder while the dog is standing on all four legs.
45-55 lbs

The Dalmatian breed is pretty consistent in regards to size and physical structure among individual dogs. The most variety can be seen within the coat patterns. Dalmatian fur exists in these varieties:

In addition, Dalmatians carry a recessive gene for longer fur, so occasionally a puppy will have medium or long hair instead of short. A few breeders specialize in long-haired dalmatians, and selectively breed two long-haired dogs; even so, not all the puppies in the litters will be long-haired since the gene is recessive.

Intelligent, energetic, alert, sensitive, and at times needy and stubborn, the typical Dalmatian temperament is one of affection and enthusiasm. Dogs of this breed are interested in any- and everything, and they are extremely willing to please. On the one hand, they're loving and playful, but they can also be quite headstrong; they will generally need a lot of attention, and don't do well when left alone.

Dalmatians are quite eager to learn, so training is usually pretty easy; some breed members, though, can be stubborn and strong-willed (particularly if they're not trained while young), so consistent, reward-based methods--starting when a Dalmatian is a puppy, if possible--is best. Dalmatians respond very poorly to harsh treatment, and are known to have long memories when it comes to such treatment, so try to avoid any negative reinforcement when teaching these dogs.

Dalmatians are loyal, alert, and protective, so they make great watchdogs; they tend to alert their owners to potential threats.

Dalmatians and kids are usually a great mix. Breed members are fun-loving and incredibly energetic, so they will make good playmates for kids of any age. Keep in mind, though, that these dogs often jump or bound around to show their enthusiasm; this natural exuberance can be dangerous to smaller kids or toddlers.

If socialized with other pets, Dalmatian should get along very well with them. They have a fairly high prey drive, so they may instinctively chase cats and other smaller animals, but they normally aren't aggressive with them. And since their history includes many years as companions to horse-drawn carriages, Dalmatians and horses get along extremely well.

Below are pictures of the Dalmatian dog breed. 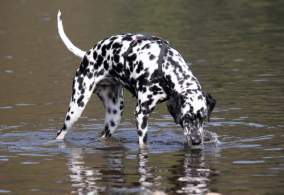 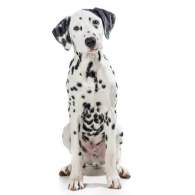 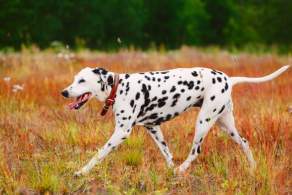 People who keep Dalmatians as pets usually sleep very well at night. These dogs are incredibly energetic, and will require as much exercise/activity as their owners possibly can give them! They're also known to bark excessively and turn destructive if they're idle for too long, so Dalmatians are best suited for people who can give them plenty of attention and exercise.

The typical Dalmatian prefers to live inside with its human family members. These dogs love giving and receiving attention, so if left alone, outside, in a yard a lot they will be extremely unhappy, and will probably find a way to escape. And an apartment might simply be too confining for these energetic animals; a house with ample space will be best.

It's often said that Dalmatians shed at two time periods: in the daytime and at night. In other words, they shed a lot! They're not hypoallergenic, so a Dalmatian owner with allergies will be miserable. Potential owners of this breed will need to be ready to vacuum often.

Unfortunately, the Dalmatian is prone to numerous health problems, both major and minor. One frequent issue among these dogs is deafness; around 10 percent of Dalmatian puppies are born completely deaf. Other issues include urolithiasis (urinary tract stones), hip dysplasia, eye problems, and various respiratory and skin allergies. Experts recommend that all Dalmatian owners have their dogs thoroughly examined by a veterinarian immediately after acquiring them, and continue with regular vet checkups throughout the dog's life.

The following dog breed registries and organizations recognize the Dalmatian as a dog breed: