Hailing from the Isle of Skye in Scotland, the Cairn Terrier is one of the three Scottish Terriers that were once classified together as Skye Terriers; the other two being the West Highland White Terrier and the Scottish Terrier. These rugged little dogs rid their owners rocky land of foxes, rats, moles, even otter. This breed remains in the top 100 dog breeds and was previously a media favorite, appearing in the Wizard of Oz as "Toto" and "I Love Lucy".

Members of this breed make cheerful, affectionate and lively companions for all ages - old, young, even men who like little dogs but don't like the "delicate" look; they are said to have a natural love for children. These dogs are great for houses with other dogs but never other small pets as they retain their instinct to chase small animals. They are also adaptable to many living environments and temperatures. They are not for the owner that gets faint hearted at the thought of firmly and consistently training an independent dog. Grooming needs are few and exercise requirements are moderate. Cairns will generally live a long life of 13-15 years, however, potential health issues are numerous and it is recommended you familiarize yourself with the possibilities.

Below are the details and facts for the Cairn Terrier dog breed.

Cairn Terriers are small-sized dogs and well-built but not heavy. Male Cairns should weigh 14 pounds, while females should weigh 13 pounds. They typically stand 9-10 inches at the shoulder.

These dogs are said to possess a natural inclination towards children and they make a cheerful playmate that can withstand rough and tumble play sessions. They will sound an alert bark toward strangers but will quickly become friendly and sociable, making them poor guard dogs. Cairn Terriers are ideal for homes looking to add an additional dog to the family, however, those will small pets should look elsewhere as they retain their prey instinct towards creatures that resemble prey. Another trait worth noting is those that leave their pets at home alone or do not prove enough mental and physical stimulation may consider this breed a nuisance, as they tend to bark, dig and chew when bored.

Overall, the Cairn Terrier is moderate maintenance. Grooming requirements are low, consisting of weekly brushing and occasional trips to the groomer for hand-stripping. Training will require effort and the ability to firmly establish yourself as the dominant one; high praise and lots of treats are the perfect reward to a Cairn. Members of this breed will be active indoors but generally require daily outdoor playtime in a fenced yard or a daily (leashed) walk or hike.

The Cairn Terrier, previously called the Short-haired Skye Terrier, descended from the same stock as the Scottish and West Highland White Terriers. This group was once classified as "Skye Terriers" (until 1873) and named for the Scottish Island from which they came. On the Isle of Skye these were hard working dogs that helped rid farmer’s property of foxes, rats, mice, moles, and otter. This land was typically rocky and rugged shorelines which lended to their hardy and tenacious personalities. It is thought that Captain Martin MacLeod, an avid sportsman on the Isle of Skye, was the original breeder of Cairns in the very early 1800's and his gamekeeper maintained the breed in its homeland after MacLeods departure to Canada in 1845.

During the late 1800's to early 1900's breeders of the other two types of Skye Terrier began petitioning to separate the breeds and by 1907, exclusive classes for the Scottish and White Terriers had formed; the Cairn Terrier was not recognized as a distinctive breed, however, until 1913. To prevent the mixing of the Cairn and White Terriers the AKC no longer permitted the Cairn to be registered if the dog was white and white is still not considered standard for the breed. Though they retain their sturdy working dog appearance, presently they are mostly bred to participate in terrier trials such as tracking and obedience.

Although their legs are short, these dogs are not as low to the ground as their closely related Scottish counterparts. Cairns are sturdy looking, well-muscled but not heavy and their feet are well padded to traverse the rugged Scottish coasts. Their body is slightly rectangular in shape and the tail is long and carried high. They have short and wide heads, more so than Scottish or White Terriers, that characteristically sport an abundance of hair. The eyes are widely spaced, deep and some shade of hazel with an alert, eager expression; they are also well eye browed. The ears of this breed are pointy and erect. Their double coat is water resistant; the outer portion is shaggy, hard and of various colors (excluding white) while the undercoat is short, furry and soft.

The hard outer coat of this breed can, in essence, be any color except white. White dogs are not considered standard for AKC registration because the occurrence of this color often denotes a cross breeding of the Cairn with the West Highland White Terrier. Among the colors considered standard are: black, red, wheaten, silver, cream, brindle, black brindle, red brindle and cream brindle. These dogs also are sometimes red wheaten, wheaten brindle, silver brindle, and silver wheaten. They may or may not have black masks, markings or points, but they do not have white markings. 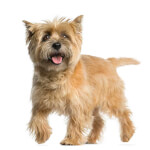 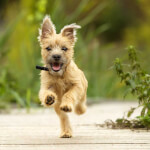 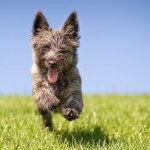 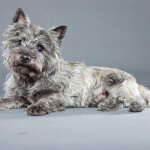 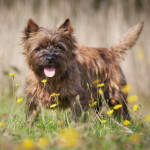 Cairn Terriers are small-sized dogs and well-built but not heavy. Male Cairns should weigh 14 pounds, while females should weigh 13 pounds. They typically stand 9-10 inches at the shoulder.

9-10 in
*Height is measured in inches from the front paws to the top of the shoulder while the dog is standing on all four legs.
10-14 lbs

In true terrier fashion, the Cairn is alert and active. They are vigorous diggers and if left alone or if not given enough playtime are prone, not only to this, but also to barking and other destructive behaviors. They desire closeness with their family or owner, and while sweet and affectionate, are not considered lap dogs because of their independence. Members of this breed will not follow you from room to room, one minute they may be on the couch next to you and the next they may be at the window curiously watching the neighbor. This independence can also manifest in stubbornness, especially when attempting to train them. Although they are intelligent, they are not recommended for an owner that cannot be firm during training. Positive reinforcement should be used (lots of treats and praise) in conjunction with the dominant guidance; this will form a tight bond between owner and Cairn and ensure they do not take over your household. The sooner you train them the more and easier they will learn.

These dogs are said to possess a natural inclination towards children and they make a cheerful playmate that can withstand rough and tumble play sessions. They are also friendly and sociable towards other dogs but retain their prey instinct towards small animals. Ever alert, Cairns will bark at strangers readily but will quickly become outgoing.

Cairns enjoy playtime with children and make cheerful and affectionate companions. They are active and lively terriers and hardy enough to handle the rough play of small children. They love to participate in outdoor games. Very young children may not be up to speed with this spunky dog and playtime should generally be supervised, however with socialization at the appropriate age and obedience training, Cairns will behave appropriately.

Cairn Terriers were specifically bred to hunt small animals such as foxes, otters, mice, moles, rats and other pests. Households with small animals that resemble these are not a good match for Cairns. They retain this prey instinct combined with the tenacious, curious and alert Terrier personality; this is a recipe for disaster. Other dogs are a different story, this breed is social and playful and benefits from having canine playmates in the family.

Cairns are tenacious, alert and poised for anything. They will likely bark to alert you to a stranger, making them an acceptable watchdog. However, after the initial alarm has sounded this dog will be friendly and cheerful.

Below are pictures and images of the Cairn Terrier. 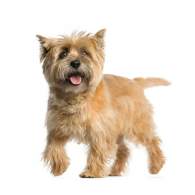 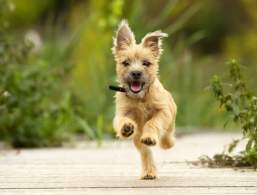 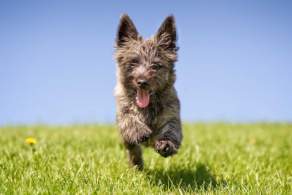 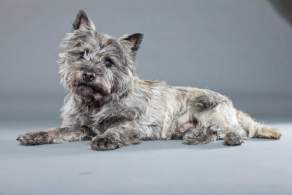 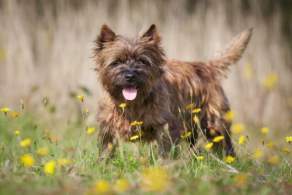 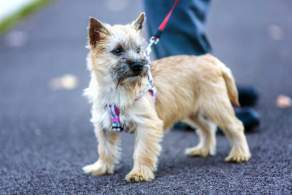 Overall, the Cairn Terrier is moderate maintenance. Grooming requirements are low, consisting of weekly brushing to prevent mats and tangles in the shaggy outer coat. Trips to the groomer for hand-stripping are also necessary to prevent shedding and allow for new hair growth.

Training will require consistency and the ability to firmly establish yourself as the dominant pack leader, otherwise the Cairn will quickly and stubbornly try to run your household. This must be balanced with positive reinforcement for these intelligent and sensitive dogs; lots of praise and treats are appreciated.

Cairns will be active indoors, curiously exploring and observing; they enjoy indoor games such as finding and seeking games and obedience training. They have medium exercise requirements that can be met with a daily long walk, hike, or play session in a fenced yard. If they are exercised outside of an enclosed area it is recommended to leash them as you may find them two blocks over chasing the neighbor's cat if they are lost track of.

Members of this breed are fairly low maintenance. A weekly brushing will prevent mats and tangles in the harsh outer coat as well as shedding. These dogs should be professionally hand stripped by groomers as clipping may reduce the natural weather-proofing of their coat; hand stripping will maintain the coat appearance and skin health.

Members of this breed have moderate energy levels. They are busy and independent, like most terriers, and enjoy digging and exploring. Cairns enjoy long walks, hikes, and playtime in the yard; they also love seeking and finding games. They will likely rid your property of any potential pests. Obedience training is also considered a way to exercise and bond with your pet. Due to the desire to explore new areas and chase small animals these dogs should be kept on leash when not within enclosed areas.

These dogs can adapt to many different living environments. Their small size and desire to be around the owner make them ideal for indoor life in apartments or houses while their curiosity and hardiness allow them to live on farms. If kept outdoors, members of this breed enjoy having another dog in the household to romp and play with. They get bored if left alone for long periods of time and may bark and dig to express this boredom. Cairns should have a fenced yard and, as they are diggers, the fence should be monitored closely.

Cairn Terriers are rugged little dogs that are adaptable to both indoor and outdoor living. They hail from the rugged Scottish coasts that had climates ranging from warm to very cold and rainy so there is very little they couldn't handle.

This breed typically has a long lifespan of 14-15 years. There are many health issues common to the breed due to their purebred history and although many Cairns will live a completely healthy life, some may experience several problems over the course of their lives. It is best to briefly familiarize yourself with the following possibilities when bringing a member of this breed into the family.

Major concerns include heart defects, clotting disorders and dysfunctional blood flow from liver to other parts of the body (Microvascular Dysplasia and Portosystemic Vascular Anomaly) and Globoid Cell Leukodystrophy. The website of the Cairn Terrier Club of America is a good site for explanations of these diseases. Many of these are problems that won't be encountered until older age--if at all. Ask your veterinarian which genetic testing is available for your Cairn and always verify the reputation of your breeder before you decide upon them.

The following dog breed registries and organizations recognize the Cairn Terrier as a dog breed: