The White Shepherd is a large, proud dog with a unique yet tragic history: unlike German dogs that during World Wars I and II were despised by English, American and other Allied nations' citizens, the White Shepherd was loved by them even as the Nazis executed a campaign to exterminate the breed in Germany and other Axis territories.

White Shepherds make great family pets and excellent watch dogs. They love to run and play — especially with children! — and they will never tire of your attention. They don't make good guard dogs, however, as they do have a notably calmer demeanor than German Shepherds. This breed is not the ideal apartment dog; they need 1-2 hours of outdoor playtime daily. These dogs will shed all year around but regular brushings should help keep the mess in check. Overall healthy dogs, they should live around 12 years.

Below are the details and specs for the White Shepherd dog breed.

White Shepherds are large dogs that weigh around 77-85 pounds when mature. Males reach about 24-26 inches in height, and females are usually 22-24 inches high.

Your White Shepherd will make a great family pet as they love to play, will get along famously with kids (be sure to socialize them early!) and should be fine with other pets. They are very intelligent, a wee bit headstrong and highly trainable.

Just as the White Shepherd will devote its life to love, loyalty and protection of the family, so too should the family be ready to reciprocate with lots of daily brushing, daily walks and near-constant attention.

The White Shepherd is a purebred dog that has a fairly short but very sad history — ironically due to Hitler, the demands for "racial purity" and, most surprisingly, the dog's all-white coat. Prior to these problems — which lasted well after WWI and well into the 1990s — the White Shepherd was a breed well on its way to renown.

In the late 19th century, Max von Stephanitz, known as the father of the officially recognized German Shepherd, worked successfully to make sure the German Shepherd in all its colors was a successful breed; white ones were no less in stature than the dark-haired dogs. It was not until shortly after Hitler's appointment as Chancellor in 1932 that all that changed almost overnight: in 1933, white-coated German Shepherds were suddenly considered defective, albino and diseased. One year before Stephanitz's death in 1936, white German Shepherds had been outlawed. By the end of WWII (for Germany) in 1944, tens of thousands of them had been slaughtered and as a direct result, they were basically non-existent in Europe by mid-century. Any White Shepherds that survived were not documented, and that trend continued for some time after the war.

Despite the defeat of the Nazis and nearly everything they stood for, the incorrect belief that white German Shepherds were genetically inferior not only remained intact but was formally accepted by many of the countries that had defeated Germany. During the 1950s, the German Shepherd Dog Club of America (GSDCA) convinced the American Kennel Club (AKC) to disqualify pure-white German Shepherds from dog shows; the club had ultimately hoped to persuade the AKC to renege the breed's registry altogether. Fortunately, that didn't happen.

It is believed that there were a few white German Shepherd dogs that survived WWII in Germany and Holland and which were direct descendants of white GSDs from the very early 20th century. They were not registered with the local clubs (thanks to the misconceptions that all but completely wiped out White Shepherds in the region), and there appears to be no easily available proof they survived or that their offspring continue. Despite the tragic history of the White Shepherd through the greater part of the 20th century, the breed survived primarily because of breeders in the United States, Canada and Mexico.

The White Shepherd was not kept in the dark during those decades, however, and they not only survived but thrived thanks to the silver screen and traveling stage shows. (Although the White Shepherd was formally reviled in some Allied countries, there were many people and large groups who advocated for the dog.) Most will remember Rin Tin Tin (who went on to star in a popular TV show, "The Adventures of Rin Tin Tin," during the 1950s) and some may even recall Strongheart and his series of movies; they were but two Shepherds of a huge group that were seen by millions in the decade following WWI.

To chart the progress of the dog's popularity during the 1920s, consider the number of AKC-registered shepherd dogs in 1920 — just over 2,000 — and again in 1926 after they appeared in numerous popular movies and vaudeville acts: nearly 22,000. Although they were not all white, there were those (on-screen and off) that were white or carried the recessive gene that helped to ensure the White Shepherd's survival.

Their overall appearance portrays the following characteristics: strong, agile, ever alert, highly intelligent. Males and females should be readily distinguishable, especially when observing the hair around the neck; in males the "ruff" is thicker. White Shepherds are large dogs with double-coats that are weather resistant. The short undercoat is thick yet fine while the outer coat is medium length, coarse and lies close to the body. Although they have a recessive gene that makes the coat white, they are similar to a German Shepherd in most every other way: tall (but longer than tall) with a wedge-shaped head, strong muzzle, black nose and dark brown eyes. The tail is low set and bushy; it acts as a rudder for the dog to keep balance when making quick, sudden movements.

The White Shepherd is exactly that: white. There are those, however, that may have light shades of very light cream to an extremely light tan color or markings in these colors, but it is not preferable. 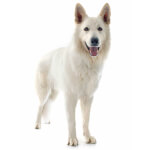 White Shepherd males, when mature, are about 24-26 inches in height, and females are approximately 22-24 inches. Both sexes weigh around 77-85 pounds, however, they are easily distinguishable by overall look (especially the "ruff" of hair around the neck).

22-26 in
*Height is measured in inches from the front paws to the top of the shoulder while the dog is standing on all four legs.
77-85 lbs

White Shepherds are essentially German Shepherds with an all-white coat, and they possess nearly all the same qualities: easy trainability, remarkable intelligence and a loyalty to family. They tend to be more mellow than German Shepherds, however, and because of this they are not used in police and guard work. However, a firm, consistent and patient owner is needed to establish themselves as the alpha; if not, this breed's abundant energy and drive may become much harder to handle. They do make excellent watchdogs, though, as they have a very keen sense of smell and are no less alert than their close Shepherd cousins.

Your White Shepherd will almost certainly be great with children. They love to play, are greatly appreciative of attention, and will let no harm come to them so long as they are around. As they are large dogs, small children should be watched when with them to avoid injury.

White Shepherds tend to get along just fine with other pets. As with any dog, they should be socialized early on.

With strangers, your White Shepherd is sure to be aloof albeit highly observant; they may even be a bit unfriendly. They are not the first to become aggressive, however, and are not utilized as police or guard dogs.

Below are pictures and images of the White Shepherd dog breed. 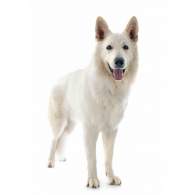 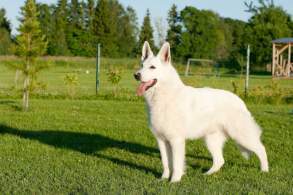 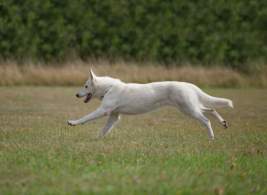 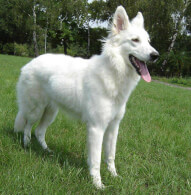 The White Shepherd is a somewhat high-maintenance dog that requires a lot of exercise, grooming and diet management. If you are unwilling to devote a few hours daily to walking, brushing and playing with your White Shepherd, this may not be the dog for you. These dogs need at least 1-2 hours outdoor exercise/playtime per day. Frequent brushing and cleanup of shed hair is a given for this breed. Luckily, they are highly intelligent and trainable if you have the patience and consistency to appreciate their abundant energy.

Like German Shepherds, White Shepherds are year-round shedders. Daily (and thorough) brushings of their coat and undercoat is required lest you spend your weekends vacuuming up the hair that will shed out — and don't forget the occasional coat blowouts that will be all the worse for not brushing! As for bathing, it should only be done when your White Shepherd gets dirty; too much bathing can destroy the coat's essential oils, which are the base for the weatherproof coat. Owners should regularly clean the teeth and ears as well as trim the nails as part of a regular maintenance routine.

White Shepherds are not indoor dogs and if not allowed outside daily, they may become lethargic and invite all manner of health and other problems. This is an ideal breed for an outdoorsy, active family or single owner; they will likely be able to keep up with or outdo you in regards to any exercise. They need daily walks as well as plenty of outdoor space to run freely on a daily basis and lots of toys, attention and games like ball-catching and Frisbee-tossing to burn off all that energy that they would otherwise employ at "work." While they do need to eat a lot to maintain this stamina, they should be fed in small amounts and with a controlled diet to help prevent bloat and other diet-related health issues.

The ideal home for a White Shepherd is large and replete with outdoor space with high, secure fences; the bigger the space — indoors and out! — the more they'll love it. They are fine as outdoor dogs, although they may enjoy coming indoors. If you must have a White Shepherd in an apartment, it is mandatory that you take her out a few hours every day or she will become bored and destructive.

White Shepherds are fine in very cold weather (they have an undercoat and oils to keep them warm and basically dry), and hot weather is not too bad either as they will simply start blowing out their undercoat and shedding like crazy.

White Shepherds are susceptible primarily to joint dysplasia, degenerative diseases, eye problems, various allergies and bloat. Although the cases are rare, there are some dogs that may have lupus and other autoimmune diseases as well as congenital spinal problems. Regular trips to the veterinarian should help aid in early detection and prevention of many issues. A well-kept White Shepherd's typical life expectancy is about 12 years.

The following dog breed registries and organizations recognize the White Shepherd as a dog breed: