Originally bred in Germany, the Weimaraner was used as a gun-dog to help hunt large game like bear, deer, and wolves. Although the breed still maintains its original hunting instincts, Weimaraners today are more common as a family companion.

Weimaraners are well known for their elegant, short, silvery coats which earned the breed the nickname the "Silver Ghost" during hunts. The breed wants nothing more than to be with their owners and family. Despite what you may think, weimaraners are strictly in-house dogs due to their short coat.

Below are the details and characteristics of the Weimaraner dog breed.

The weimaraner is a large sized dog breed with males being as large as 27 inches tall (from ground to shoulder) and weighing up to 85 pounds. Their size makes them more appropriate for a house with a small yard than an apartment, however as indoor dogs they will be happiest anywhere as long as they are with their owner.

As large game hunting dogs, weimaraners were bred to be alert, fearless, intelligent, and above all else, obedient. With the right owner, the weimaraner can make the perfect companion dog. However, the breed's high energy levels and occasionally strong will can make it difficult for people inexperienced with dogs to properly handle. The breed does well with older children, but should not be left alone with smaller kids as the dog's high energy and size can easily overwhelm a toddler. They are not ideal dogs if there are smaller pets around. Since the breed has a high prey instinct, it is likely the weimaraner will see any cats or smaller dogs as prey and will attempt to catch them.

The weimaraner is one of the easiest dog breeds to groom. Their silky short coats almost seem to repel dirt and mud. The breed only needs to be brushed weekly and will need to be bathed as needed to prevent/remove any odors. Weimaraners have an extremely high amount of energy and require hours of exercise each day. Unexercised weimaraners often get into trouble and tend to develop unwanted behaviors such as barking, chewing, and digging.

The Weimaraner is a dog that may have been far more rare had it not been for one man breaking the rules of the breeding club that hoped to keep it rare.

The dog was originally called the Weimar Pointer and was first known in the early 19th century. This silver-gray, ghostly looking dog was developed by wealthy Germans in an attempt to create a superior hunting breed for big game. Some say that the German Shorthaired Pointer was a primary bloodline, others say that it was the German Braken and still others claim it was a number of pointers, hunters and even a French hound. However the Weimaraner origin came to be, the dog eventually was used primarily for flushing and retrieving fowl. This wasn't for a lack of ability on the dog's behalf; it was because Germany's forests were shrinking — along with the big game that required them for habitats.

In 1897, the German Weimaraner Club was created; potential members were heavily vetted in order to maintain the dog's purity and status symbolism. Some members were limited to being allowed only sterile dogs so as to further maintain purity, and it was basically forbidden to export the dogs out of the country.

One of those club members who successfully applied to the Club was Howard Knight, a U.S. citizen from Rhode Island. In 1938 (right before the world war that could have killed off this dog), he was given a male and two females. With these dogs, Knight was able to basically save the dog from sure destruction. In the midst of the second world war, in 1942, he led the charge to create the Weimaraner Club of America. That same year, the breed was formally recognized by the AKC; by the following year, the dog was being exhibited at Westminster.

By the 1950s, the Weimaraner's popularity was growing enormously in the U.S. As president of the United States, "I Like Ike" Eisenhower was responsible both for the dog's popularity as well as weakening the breed when he took his Weimaraner, Heidi, to the White House-- the demand damaged the dog by disreputable "breeders" producing watered stock to sell to unsuspecting citizens.

These days, the Weimaraner remains a relatively popular dog, and the AKC lists the breed as being the 34th on the list of the most popular ones. (They came in at number 12 on the same list in the mid-1950s.)

The Weimaraner is an elegant, stately and athletic-looking dog. The breed was built to be balanced, large and stronger instead of faster. (Although the largest gun dog breed in the world, the Weim is a bit slower than most hunting dogs). The short fur, while not hypoallergenic, should have a glossy sheen to it.

These big, beautiful dogs have a huge, slightly domed head with massive, floppy ears. Set above their very narrow muzzle are their piercing eyes. As a puppy, those wonderful Weimaraner blue eyes will steal your heart, but be prepared to watch them change color as the dog matures. A long neck leads to the sleek body, and you'll quickly notice the very strong chest and forelegs. Their height, often-docked tail (the AKC's standard calls for docking, whereas most other kennel clubs the world over call for a full-sized tail) and the Weimaraner webbed feet are other aspects that all but complete this fine dog's appearance.

Like the eyes, the Weimaraner coat will change early on. As puppies, they will have whitish stripes that will very soon dissolve.

Below are the standard coat colors for the weimaraner dog breed. 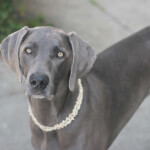 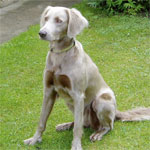 A full-grown Weimaraner is a very tall dog and, overall, considered large size. The average male stands about 25 to 27 inches high and tends to weigh within a narrow range of 70 to 85 pounds. Females are a wee bit shorter at 23 to 25 inches but a fair amount less than males as they weigh from 55 to 70 pounds once fully mature.

Perhaps the one thing about the Weimaraner weight as opposed to the Weimaraner height is these dogs look larger than they weigh because of their height and their very strong chest.

23-27 in
*Height is measured in inches from the front paws to the top of the shoulder while the dog is standing on all four legs.
50-85 lbs

Then there are all the different color types. Gunmetal, blues, long-haired blues, silvers, the Dobe (black and tan — but there are those that are blue and tan), and the bizarre-looking Piebald. There are also some markings that occur (such as a white chest) that pop up among the various coat colors.

If you are looking for a miniature Weimaraner, however, the search will be fruitless. While there has been a very small Weimaraner here and there, it has always been due to the dog having Primary Valley Fever or being a remarkably small runt. Unless you have been talking to an unscrupulous "breeder" who is crossing a Weimaraner with some other breed (or hybrid), you won't be finding a mini Weimaraner (or teacup, or toy, or any other such size variation) anytime soon.

The Weimaraner temperament is a high-maintenance one, and you should be absolutely sure that you have thought out the decision to get one of these dogs — and then sleep on it. While they are beautiful, elegant and unique-looking dogs, there is so much more responsibility than merely grooming them to keep that ghostly sheen.

The part of the Weimaraner personality to hunt and be social remains as strong as ever. These dogs will chase down and kill anything small, running and furry, and if not restrained by a lead or very secure fence, they will frequently enough present such things as gifts. For that matter, they tend to chase anything that runs, be it kids, bike-riders and cars.

Because Weimaraner traits develop very slowly, you absolutely must understand that training should start early and that you must always be patient. Despite their characteristics to the hunt and to be great gun dogs, they do not respond well at all to raised voices or worse. They also require constant attention, and leaving them alone for even moderate lengths of time can prompt them to be destructive (to themselves and whatever is around them) in their attempts to escape and be with you.

When it comes to family dogs, the Weimaraner temperament with children is an excellent one. They are hunting and gun dogs, to be sure — but they also expect to be one of the family. They will have to be very carefully trained during their first two to three years to not chase small children, however, and this may be difficult. It's very cute when they are puppies, but once they are fully grown, they may get a bit too excited when playing.

They will shadow you everywhere (and I mean everywhere!), therefore they can make excellent playmates for kids that are steady on their feet and respectful to animals.

Below are pictures of the Weimaraner dog breed. 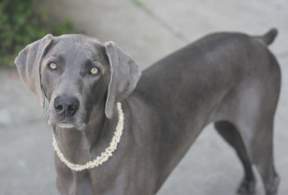 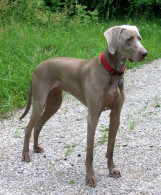 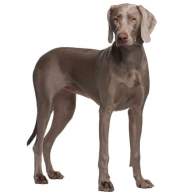 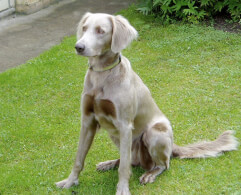 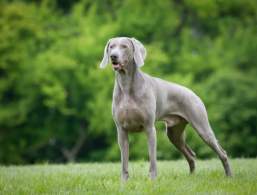 Living with a Weimaraner as a pet is not easy, but it is certainly worth the "task." These dogs are ideal for stay-at-home families as well as people who love to exercise, travel and always have their dog with them. However, if you are looking for a guard dog, are away for lengthy periods, have lots of acquaintances over, or neighbors whose houses are very close (due to barking), the Weimaraner is not the dog you'll want.

Left alone, Weims will destroy property, bark non-stop and may even cause injury to themselves attempting to escape. They are not good in small apartments, and they definitely are not good with cats or other dogs. (They will chase and kill cats, and they will work non-stop to dominate other dogs.) They regard strangers with definite suspicion. They absolutely cannot be outside without supervision, and if they are to be outside the walls or fence, a leash is essential; once they get a scent with their extraordinarily strong noses (or are otherwise distracted, which they can easily be), they will be off like a shot.

Perhaps the one thing that cannot be helped is that these dogs are not hypoallergenic. Owning a Weimaraner can be difficult for people with allergies as they shed a lot and require a great amount of grooming.

Below are health issues and concerns most common in Weimaraners

The following dog breed registries and organizations recognize the Weimaraner as a dog breed: