Due to the breed's protective instinct, they can be a challenge for many families. They are not familiar with children, are wary of strangers, and can easily become territorial. Because of these potential issues the Tibetan mastiff is often not recommended for new dog owners.

Below are the details and characteristics of the Tibetan mastiff dog breed.

The Tibetan mastiff is considered a large to giant sized dog breed (and can often appear much larger due to their fluffy coat). While their size helps keep away intruders, it can be a bit to manage for small-framed owners, especially considering that the breed prefers to be inside with it's family rather than living outside.

The breed is highly intelligent, and knows it. They are well known as being stubborn and will often choose to ignore their owners if they feel their owner is wrong. The breed does well with other pets, especially if raised with them from a young age. Tibetan mastiffs also do well with older children, but the rambunctiousness of younger children can easily excite the breed (mistaking a child's playful scream as a threat or sign for help). Because of this, they do best with families with older kids.

The Tibetan mastiff has a thick, long, wavy coat. Despite the heavy coat, the breed sheds very little. The breed needs to be brushed 3-4 times weekly to remove dead or loose hair and to help prevent tangles. The Tibetan mastiff also doesn't generate a doggy odor and doesn't need to be bathed more frequently than once per month. The breed does best with a large enclosed yard and ample space to be with their owners indoors. The Tibetan mastiff doesn't have heavy exercise requirements and can meet their exercise needs with 30 minutes of play in the backyard or a half-hour walk.

The earliest accounts of Tibetan Mastiff history date back to about 1100 B.C. Genetic testing proves the dog has been around for about 5,000 years. What may be most amazing is a 2008 mitogenome study that essentially put the breed at the forefront of dogs: the conclusion was that diversion from the Gray Wolf occurred approximately 58,000 years ago. (Twelve other ancient breeds diverged from that wolf breed many millennia later around 42,000 years ago.) Other studies have posited that this "mastiff" may have been partially responsible for other mountain dogs such as the Bernese Mountain Dog, the Great Pyrenees, the Rottweiler and the Saint Bernard.

In the 1870s, they made their way out of Tibet as gifts from Easterners as well as exports by Westerners, with England being the place where the breed landed. Queen Victoria received a "large dog from Tibet" from the viceroy of India, and the Prince of Wales (who later became King Edward VIII) took two others for himself.

When the stud books for the The Kennel Club (TKC) were formed in 1873, it was then that the misnomer "Tibetan Mastiff" was coined. It took several more decades before England became home to the Tibetan Breeds Association, which created a standard. The association, formed in 1931 by Mrs. Bailey (who was married to and lived with a Colonel Eric Bailey stationed in Tibet), was done so after she had become acquainted with the lama who managed the kennels for the Great Thirteenth Dalai Lama.

The invasion of Tibet by China took place in the 1950s, and the resulting action threatened the breed's existence. During that time, U.S. President Eisenhower received a pair (although nearly nothing is known of them) and it was rumored that in the 1960s, hippies used them to transport drugs. (Import / export personnel apparently refused to endanger themselves to inspect the dog crates.) In any case, the breed survived — although finding a truly purebred Tibetan Mastiff was rare and often meant traipsing up into the Himalayas to find one.

Because of the reports that the breed was being exterminated, breeders in the U.S. went to work. In 1974, Ausables Kennels (in New York) registered the first litter, the "A" Litter, out of which came the legendary Apache Anne. By the 1980s, the breed had become highly coveted worldwide. Despite being perhaps the absolutely oldest dog breed on the planet, the AKC only recognized Tibetan Mastiffs in 2007. Shortly thereafter, the dog's popularity exploded even more. In China, there was reported to be some specimens that were sold in excess of $1 million (about 6 million yuan).

The Tibetan Mastiff is an unmistakable dog when seen: very large (sometimes gigantic), extremely sturdy and with a great tail and even greater head. He may not appear alert facially (unseen eyes, tongue hanging out, etc.), but make no doubt: he is aware of you and everything else.

To be sure, the head is huge beneath that massive mane of hair. The eyes, which tend to be covered, are there and probably staring at you over the broad, squared snout and black nose. If he opens his mouth, you'll be treated to a lot of long fangs that should scissor into each other. There are medium-sized ears, too, although on some of these dogs they may blend into the mane. They have small, cat-like feet, although "small" is a relative term with this breed. The tail should be bushy and curl up and over the body.

There are two basic coat styles: the Lion Head Tibetan Mastiff and the Tiger Head TM. Details on these two varieties can be found elsewhere on this page. There is also the Bearded Tibetan Mastiff, which many people confuse as a variant of the Tibetan Mastiff but which is an entirely separate and extremely rare breed unto itself.

Below are common coat colors of the Tibetan Mastiff dog breed. 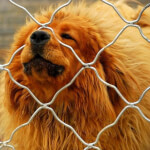 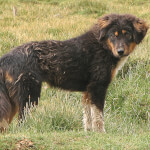 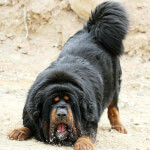 The catch to the Tibetan Mastiff size is the maturation period. These dogs take much longer than nearly every other dog breed to develop. Males tend to take from 1 to 2 years to fully mature but females may take up to 4 years.

24-26 in
*Height is measured in inches from the front paws to the top of the shoulder while the dog is standing on all four legs.
100-170 lbs

In the Western world, the big Tibetan Mastiff dog is regarded singularly. In India, this dog is identified as two types: the Lion Head Tibetan Mastiff and the Tiger Head Tibetan Mastiff. The Lion Head is smaller but appears to have a larger head due to the mighty mane that rings the neck. The Tiger Head, however, is larger but with shorter hair. All Tibetan Mastiffs can apparently produce archetypes that often appear in the same litter. The smaller of these two sub-types is the Do-khyi which in Western terms basically means "nomad." The other one, the Tsang-khyi (which simply means "dog from Tsang") is considerably larger and is sometimes also called the "monastary" type.

There is also said to be the Red Tibetan Mastiff, but this "variety" is up for examination. Because the most expensive dog in the world — someone paid $10 million yuan ($1.5 million) for him — was a Tibetan Mastiff that was purely red, many have implied there is a variation known as the "Red Tibetan Mastiff." Whether this particular dog happened to be red or there really is such a variety remains to be positively stated. It just so happens that this red dog was also the biggest Tibetan Mastiff in the world.

If you are not experienced with mountain dogs, this dog — which is difficult enough to acquire — is definitely not for you. With several thousands of years of being bred for protection during the cold nights against large, aggressive animals, they are highly independent animals. They require dominance lest they dominate and jobs lest they destroy.

Despite their size, the Tibetan Mastiff personality is a bit like a cat: they desire to do as they please at times. Understanding the breed's historical purpose will help you understand the characteristics, such as how they probably think that if you both are in the same city, then the two of you are "together." If you don't have an innate authority that is calmly and constantly exhibited, you'll find these dogs even harder to manage as they won't respect you.

These dogs are highly sensitive to change. They need routine, they need to be socialized carefully, and they need to be trained constantly. Since the Tibetan Mastiff matures over a very long time — from 4 years to about middle age, which for them is about 7 years old — interruptions in their life can have lifelong consequences. Still, they are fast learners, but only for what they think they want. Mere tricks will not be to their liking; they are not good in agility and obedience competition. House-training, however, should be easy as these are very clean dogs with a great amount of self-respect.

If by now you are thinking that the Tibetan Mastiff personality is challenging, you are getting the idea.

The Tibetan Mastiff family dog is a responsibility as daunting as raising a child: the dog may behave radically different during what may seem like two similar situations. An example would be him watching while your kids — with whom he was raised and properly socialized — while they played. Then some friend's kids come over and the play continues — until the Mastiff bolts aggressively. What to you was just kids playing was to him a threat to those he loves and protects. If you are planning on having a Tibetan Mastiff, and you already have children living at home, they must learn to not play too roughly with the dog lest he become frightened and bite. It should also be noted that he may attempt to dominate very young children, as it's in the breed's nature to do so with smaller creatures.

Despite the reputation that the Tibetan Mastiff is a fierce dog — and they certainly can be! — they can be extremely protective of other pets in the family. They will have had to grow up and be closely socialized starting when the dog was a puppy, however. They are even typically good with cats if the puppy grew up with them. Other dog breeds fare well too. Problems occur with Tibetan Mastiffs of the same sex as there is a known aggression issue. Still, they are very suspicious of anything new, so always be careful with other animals.

Below are pictures of the Tibetan Mastiff dog breed. 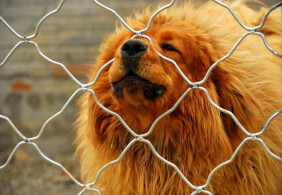 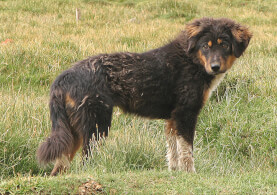 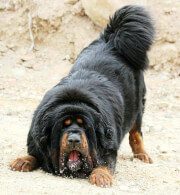 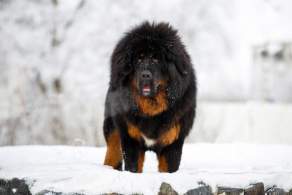 Owning a Tibetan Mastiff is a bear of a responsibility. These dogs are literally prehistoric, and yet they understand their size and strength as well as how they may outsmart you if you let them. This is one of the few breeds that typically doesn't develop separation anxiety, as they are accustomed to long days in the mountains while on their own. They are barkers, and leaving them outside (especially at night) will earn the ire of neighbors, for any small noise tends to set them off.

Tibetan Mastiff owners agree this is NOT an apartment dog. They need a large yard, at the very least, and the yard absolutely must be secure. These dogs are escape artists, they are huge, and they are strong, and a basic chain-link fence simply won't do. Still, they are not good outdoor dogs (unless they are in the mountains), and they don't thrive in hot or humid climates.

If you have a Tibetan Mastiff as a pet, you will quickly notice that while they are not hypoallergenic, they don't shed regularly, they tend to not have that "doggy odor," and they drool a lot. They do shed, however, and that comes in the form of an annual blowout. Females will sometimes blow-out a second time after pregnancy. When this yearly event occurs, there will be hair everywhere.

Below are health issues and concerns most common in Tibetan Mastiffs

The following dog breed registries and organizations recognize the Tibetan Mastiff as a dog breed: