The Staghound is a large type of dog resembling the Greyhound and the Scottish Deerhound. The Staghound is not recognized as an official breed; it encompasses a few closely related dogs that have been bred as hunting and running dogs, including the Australian Staghound and the American Staghound. Because these dogs were and still are bred for function over form, individual dogs may have rather different bloodlines incorporating a variety of different breeds, and may exhibit very different characteristics.

Below are the details and specs for the Staghound breed:

These dogs are natural hunters but have been known to be affectionate and good with kids and families. They are pack dogs and require that their owners take pack leader positions to avoid disobedient behavior. Staghounds are generally good with other dogs but may be trouble if smaller pets are around.

The first dogs to be bred as Staghounds were likely Greyhounds mixed with Scottish Deerhounds, brought to Australia by European colonists the late 18th century. Since then, the breeding of these dogs have been different depending on what the breeder was trying to achieve and what breeds were available at the time. Due to this, some Staghounds may have a family tree infused with foxhounds, bloodhounds and other breeds.

Sometime in the early 1800's these dogs started to appear in America, and were bred to be able to chase coyotes, wolves, and other aggressive animals. These Staghounds eventually developed their own line which is now known as the American Staghound. General George Custer was known to have used the Staghound as part of his dog pack. The Staghound has traditionally been in the hands of huntsmen chasing dangerous game, and some think that as their function declines so will they. In recent years, however, there appears to be increasing interest in the Staghound as a pet, so this may not end up being the case.

The Staghound's appearance is somewhere between a Scottish Deerhound and a Greyhound. Since it is a running dog, it has many of the physical features that are found in the Greyhound: long legs, a robust chest, and lean, solid musculature. These dogs may have one of three coat types: the "shag" coat, which most resembles the Scottish Deerhound's, and is long and wispy; the "slick" coat, which is like the Greyhound's, and is short and smooth; and the "broken" or mixed coat, which is a mixture of the two. Staghounds have a long snout, a long, thin tail, and small, floppy ears that perk up when the dog is excited.

Staghounds can be found in an assortment of colors and patterns that resemble those on the Greyhound and the Scottish Deerhound. Among the most common of these are gold, black, gray, brown, sable, brindle, and combinations thereof. 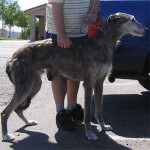 24-32 in
*Height is measured in inches from the front paws to the top of the shoulder while the dog is standing on all four legs.
45-90 lbs

This type of dog has been bred as a hunter of aggressive and fierce beasts, but it also has a temperament that is very safe with people, pets and all types of livestock. Staghounds that are properly socialized grow up to be great pets as well as great hunters. These dogs are known to be calm around the house, and attention craving. They will seek human contact and will be especially close to their owner(s), making them wonderful companions. Due to their intelligence and great vision most Staghounds make for excellent watchdogs, but they are not especially protective and may not be the best guardians. Staghounds are very agile and energetic when out on a hunt but are typically not hyperactive as adults. Some owners even suggest that their Staghound is a bit lazy around the house.

Owners should realize that Staghounds throughout history have been bred for one purpose: hunting. Even puppies raised in a home will mature with strong hunting instincts. If off leash they should be muzzled, and if they are left at home unsupervised they should be kept separate from other animals. Training should emphasize the owner achieving pack leader status. All humans must be higher on the pack hierarchy than the dog for the relationship to be ideal.

These dogs are good with children, but its above average size should prohibit being left alone with younger kids.

These are pack-oriented animals so they should be accepting of other dogs. Small pets such as rabbits and cats are a challenge that these dogs may not be able to overcome. Some owners report that their Staghounds live amicably with cats.

These dogs should not display undue aggression to strangers, but they may bark. For this reason they make good watchdogs but poor guard dogs.

Below are pictures of the Staghound dog breed. 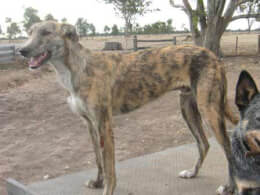 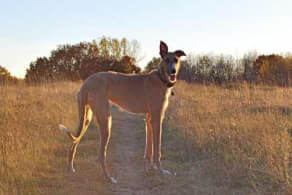 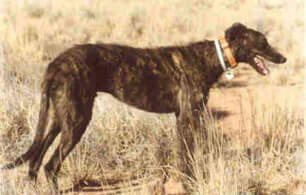 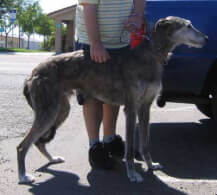 This type of dog is low to medium maintenance. This dog will need some brushing done, the frequency depends on the type of coat. Due to their active nature these dogs will also need a wealth of exercise, and a yard for them to run around in is highly recommended.

Staghounds with shaggy coats will require more brushing than their smooth coated brethren. At least twice a week is recommended. If these dogs are taken out hunting the owner must be mindful that they will require a good brushing in order to prevent infections. Smooth coated dogs don't have to worry about matted and tangled coats, and will only require an occasional brushing.

This type of dog requires daily exercise to be mentally and physically stimulated. Its active hunting genetics also gives it a predisposition to love running, and it will be happiest living in a yarded house where it can run freely. The Staghound is a fantastic companion for a person who runs, hikes or rides a bike often--it will have no trouble keeping up. Just be sure not to over-exercise the dog when it is under 12 months old, as this can harm its developing bones.

These dogs need some space to run and should not be kept in an apartment. They are best suited for rural homes, however, they can do well in a residential environment if they have a fenced-in yard and frequently are taken on walks. Many Staghounds are kept outdoors, but they appreciate being able to enjoy the comforts of living in the home.

Hot and humid climates are generally not suitable for the shaggy coated dogs as they tend to overheat quicker than the smooth coated ones, though they are better suited for cold weather.The smooth coated types are well suited for warmer areas but are susceptible to the cold and will require a warm shelter when it gets chilly.

There are no known genetic health problems for this type of dog, and you can expect them to leave to be 12 to 14 years old if properly cared for. Due to its low percentage of body fat to muscle ratio, the Staghound is very sensitive to anesthesia. Owners should not take their Staghound on a run right after it has eaten due to torsion bloat concerns.

Below are health issues to watch out for in staghounds.

The following dog breed registries and organizations recognize the Staghound as a dog breed: