The Scottish terrier is a small breed dog which was originally bred to hunt badgers, foxes, and other small game. Scottish terriers are independent dogs which were bred to work without their owners presence, so even though the breed is intelligent they can be difficult to train. They have a strong prey chasing instinct and oftentimes will dig holes to find mice which can become a problem on nicer properties.

Scottish terriers are bold and will stand up for themselves if they feel pushed around by another pet or person. They are loving and affectionate towards their family, but are naturally suspicious of strangers so it may take some time for them to get used to new guests.

Scottish Terriers were bred to be ratters and hunters. They are built to "go to ground," which means they will chase small game and vermin through the brush, under obstacles and ultimately into underground tunnels and holes. They make great family pets so long as you have a small family and mature children who understand boundaries and facts particular to this breed. Most Scottish Terrier problems arise from the misperception that these otherwise playful, tough and fearless dogs are always ready to play rambunctiously. They are best for experienced dog owners, as Scotties can be territorial, aloof and moody, and their independent personalities require a lot of patience and personal space. There are many good books available that are brimming with about Scotties.

Here are some Scottish Terrier pros and cons that will help you understand these remarkable dogs:

Even though the Scottish terrier is small breed they can be surprisingly heavy for their height since they have short legs. Adults are usually 10 inches tall from ground to shoulder, yet can weigh as much as 22 pounds. Their small size makes them a good choice for apartments and traveling.

Scotties have a unique personality. Unlike other small dog breeds, they tend to be more reserved and prefer letting other dogs get attention. They aren't necessarily the most cheerful dog breed, but they do enjoy being with their family and are devoted to anyone they care about. The breed is excellent with children and is often called the "nanny" since scotties will watch over kids as if he/she was their guardian. Scottish terriers do not do well with other small pets since the breed has strong hunting instincts for smaller animals.

Scottish terriers hair doesn't stop growing, so they don't shed as much as other small dog breeds. Unfortunately, this doesn't necessarily mean they are a low maintenance dog breed. Scotties require weekly brushing and combing to keep their coats tangle free and clean, plus since they need a haircut every two months to keep their coat from getting too long. Scottish terriers need 30 minutes of daily exercise, but don't make excellent jogging companions due to their short legs.

It may be that the Scottish Terrier has been around since B.C turned to A.D Some people say that when Pliny the Elder wrote of "small dogs that would follow they quarry to ground" in his 55 B.C. records regarding the Roman invasion of Britain, he was documenting the breed. Romans noted the dogs and called them "terrari," which was Latin for "workers of the earth." The phrase had its root word in "terra," which meant "earth."

It took several centuries before the Scottish terrier history was again made. In his 1436 book, A History of Scotland, Don Leslie wrote about a little dog that could be described as a Scottish Terrier. During the 1500s, the brazen little hunters were immortalized in art and literature. Although they had become recognized as companion animals by then, they remained appreciated by farmers for their vermin extermination and by hunters for their ferocity even when they "went to ground." In the 19th century, two distinct breeds had emerged. One of them, a rough-haired dog, formally became the Scottish Terrier. (The other was a smooth-haired breed that is now known as the English Terrier.)

It was in 1860 when the Scottish terrier first appeared in a dog show. This first appearance seemed to have sparked a debate over the true breed description, and it took nearly two more decades before a standard was approved in 1877. When Capt. Gordon Murray published what he proclaimed was the standard, it was not long afterward, in 1880, that it was basically accepted. By 1882, Scottish Terrier breed clubs were being founded.

The breed was exported to the United States in 1883. Two dogs, Tam Glen and Bonnie Bell, were the first to arrive. By 1900, the first club devoted to the dogs was established. It took another quarter-century, in 1925, before a standard was accepted.

Scottish Terriers are sturdy, solid and compact dogs whose low carriage may appear to float under their long coat.

The Scottie dog face is instantly recognizable: the boxy muzzle, beard, and serious eyes. These dogs have a long head compared to the rest of their somewhat short body, and it is normal for these dogs to let the head angle down at about 45 degrees. This allows their piercing, almond-shaped eyes to stare straight ahead even as they are overshadowed by bushy eyebrows. They have a scissors bite that may be difficult to see because of the "beard" of long hair. The triangular ears are always up and alert, and are medium in size. The short legs are typically hidden from view by the undercarriage that often hangs to the ground. The broad chest is also obscured by this part of the coat. The tail is like the ears: short and standing straight up most of the time.

The Scottie's weather-resistant coat is made of medium-length hair. The overcoat is harsh and wiry, and the undercoat is soft and thick.

The side effect of Scottish Terriers having been so popular a century ago has remained with us via the misperception that the breed comes in only two colors: black and white. To be sure, these dogs come in six colors (as described by the American Kennel Club). Furthermore, these colors may range in shades of blonde, silver, golden, grey or even brown. It is not uncommon for a Scottie dogs to be thought of as pure white when they are actually a very pale yellow called Wheaten. (The West Highland White Terrier, which is pure white, is often mistaken for Scottie.) Brindle Scottish Terriers are perhaps the most striking, as the patterns can create unique patterns in their coats.

The coat colors of the Scottish Terrier are: 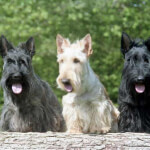 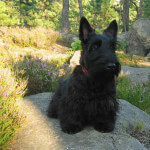 They are small dogs, but it's best to get a Scottish Terrier weight chart from your vet or another certified source to make sure your dog is the right ratio of weight to height. Typically, a full-grown Scottish terrier weight is different for males and females. The males weigh from 19 to 22 pounds and females are just a wee bit lighter and range from 18 to 21 pounds. The average height is the same for both, however, as all Scotties tend to stand about 10 inches tall.

10-11 in
*Height is measured in inches from the front paws to the top of the shoulder while the dog is standing on all four legs.
18-22 lbs

Long ago, there were variations of the "Scotch" Terrier, which was also called the Skye Terrier. While one of those varieties became the Scottish Terrier, there are no current types of this breed. This recognition of varieties started in the 1870s and became pronounced in the 1890s when the types became standardized as Scottish dog breeds.

There was first a split that identified two different types: the Dandie Dinmont Terrier and the Skye Terrier. These were ultimately split into five breeds which remain recognized today: Cairn, Dandie Dinmont, Skye, West Highland White Terriers (aka Westies) and, of course, the Scottie which was first known as the Aberdeen Terrier. All of them had a wiry coat. If you are told there is a variety of "wire haired" Scottish Terriers, know that all Scotties are wire-haired.

As for mini, teacup or toy Scotties, there are none. These particular Terriers are small dogs as it is. If you are told that a Scottish Terrier will remain miniature in size, this could mean it's a runt or has been crossbred, or that something is not right.

The Scottish Terrier temperament is a that of a true Terrier: she's exceedingly loyal to family, extremely aloof to strangers, and will bite at the bit whenever a squirrel or other small creature (or neighbor's cat) is present. She will mirror your moods, so it is best to be gentle when expressing them. Nevertheless, this breed is very smart, highly independent and rather wary of new situations. One of their best traits is recognizing people many years later — even if they only met that person once.

The Scottish Terrier personality is a lovable one but there will always be behavior that may erupt at inconvenient times. Perhaps one of their most frustrating characteristics is their stoicism. Scotties are known for bursting out in seemingly unfounded aggression or unprovoked mischief, so you will want to take the time to properly and patiently socialize her. This may not prevent this disposition, but it will help manage it.

One of the questions many people will ask before adopting one of these dogs is, Are Scottish Terriers good with children? They can be, but only with a lot of socialization as well as a great amount of training for a Scottie and education for your children. Scotties tend to react poorly when startled, and they are known to have inexplicable aggression issues too. They have a very low tolerance to being poked, prodded and pulled. Even if teased without being touched, they may behave in a hostile fashion.

The ideal situation for a Scottie is to live with a single person or a couple with no kids.

Below are pictures of the Scottish Terrier dog breed. 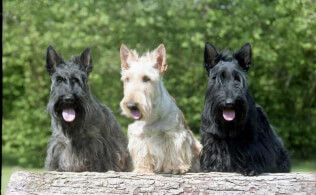 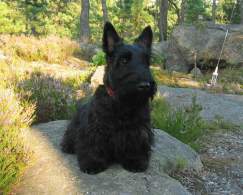 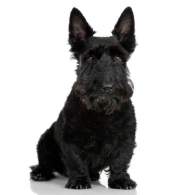 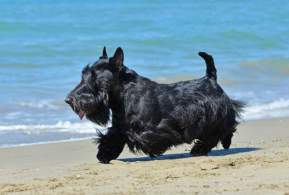 Scottish Terriers don't bark much, but they are born diggers. If you let them out in the yard and you have a fence with a weak foundation, you can expect a swift escape. They are also prone to separation anxiety. They love the company of people, and leaving them alone will make them stressed, anxious and possibly destructive.

Owning a Scottish terrier if you live in an apartment is fine, but you will need to walk him daily and let her get into grassy areas where he is allowed to dig a bit. if you have a yard, be sure it is very well founded so she can't dig under it — and she will try! Also, expect her to give to chase to most any small animal on the ground.

Although they have lots of long hair, Scotties don't shed much. If you are wondering if Scotties are hypoallergenic, they are not.

All dogs have health issues, and some dogs have ones particular to their breed, but few have the problems that Scotties are known to develop. One is chewing themselves bald from flea bites. It may be because they are low to the ground and have a thick double-coat into which parasites love to burrow.

There is also "Scottie cramp," but that is not so much a health concern as the dog's need to rest after being highly active or from stress.

Here are some of the Scottish Terrier health concerns you should know about:

The average lifespan for a Scottie is 12 to 15 years.

The following dog breed registries and organizations recognize the Scottish Terrier as a dog breed: