The scotch collie was the original name given to the collie dog. They are intelligent dogs which excelled as a working breed on farms for their herding, watch, and guarding abilities. As the popularity of the collie increased in the early 1900's, the original traits for the scotch collie were mostly bred out to produce collie variations which were better companion and show dogs.

Today the scotch collie breed is preserved by breeding working collies with Scottish ancestry to produce offspring with the same characteristics and traits as the original scotch collie. Today's scotch collie is a highly intelligent dog with a desire to work and please its family.

Below are the main characteristics and traits associated with scotch collies:

The Scottish collie is extremely easy to train due to its high intelligence and desire to please. They are remarkably skilled at herding and may occasionally attempt to herd groups of animals or children. Some owners state that the dog may be unusually clingy to it's family, however many feel this is a characteristic of the dog's loyalty to it's owners.

Scottish collies are pack oriented dogs and because of this they do well with other pets (especially dogs) and families. It is a natural instinct for scotch collies to have order in it's pack with one leader, so it is important for it's owners to be seen as the alpha in charge of the pack to have a successful relationship.

The scotch collie was originally bred in Scotland several centuries ago as a farm dog to aid in herding and protecting the flocks. It is believed that Scottish collies ancestors include Celtic Dogs, Roman Cattle Dogs, and Viking Herding Spitzes.

By the 1900's the popularity of the scotch collie had grown as the dog was known to be an excellent working dog as well as a pleasant pet for companionship. Queen Victoria was fond of the scotch collies which also contributed to its popularity. During this time period all collie dogs were considered the same breed, however their popularity caused a surge in breeding new collies for use as a show and companion dogs for families. This led to new variations of collies which were more favorable as pets rather than work dogs. These new collies essentially bred out the vast majority century old bloodlines which were used to create the scotch collie.

Fortunately, a few direct descendants of the original scotch collies (also called the Old Time Scotch Collie) were still used as farm dogs in remote regions and retained the original heritage and traits. Today the vast majority of scotch collies are bred from select rough collies, Australian Shepherds, and English shepherds with Scottish ancestry with the intention of preserving the original traits of the scotch collie as well as bringing back its popularity.

Scotch collies are rugged working dogs which are able to adjust to sudden changes in working conditions and the environment. To cope with this, the scotch collie has a well built body, a smooth stride, and a dense double coat.

There are no breed standards for coloring as all colors are accepted. With this being said, the most common colors include black, blue, chocolate, grey, red, sable, white. It is not uncommon for the coat to consist of multiple colors. 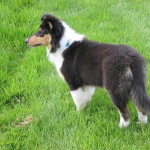 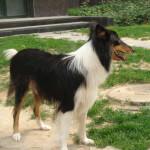 Scotch collies are medium to large dogs which are generally 20-25 inches in height (from ground to shoulder) and can weigh as much as 60-70 pounds. They are slightly longer than they are tall and appear lean and fit.

19-24 in
*Height is measured in inches from the front paws to the top of the shoulder while the dog is standing on all four legs.
40-70 lbs

Scotch collies are known to be sweet and affectionate towards their owners. Due to the dogs high intelligence it is highly recommended to train the scotch collie to prevent them from finding destructive ways to entertain themselves.

They are generally a well rounded breed and are not shy nor vicious towards strangers, however they may be reserved at first.

As a working dog they are eager to do work and will only rest/lie down when they are not needed. The breed is well known for its work ethic, intelligence, and boldness.

Scottish collies are friendly and playful with children. However, since they have a strong herding instinct they may try to herd children which may be a concern for some.

As pack dogs, scotch collies do well with other pets. They do best with dog with similar energy levels, but will generally get along with any household pets.

Scotch collies are usually wary of strangers, however they can quickly accept them depending on how their family greets them.

Below are pictures of the Scotch Collie dog breed. 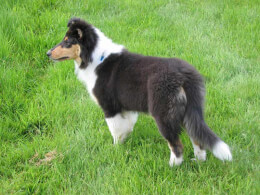 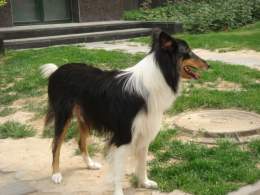 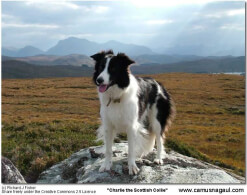 The scotch collie is a medium maintenance dog. Its coat will need weekly brushing to prevent matting and as high energy dogs they will require moderate exercise to keep them from becoming hyperactive.

The scotch collies coat will need to be brushed every one to two weeks to remove dead hairs to to prevent matting. If matting is bad it may need to be cut out. The breed should be bathed as necessary.

Since Scottish collies are very adaptable dogs they can live in apartments, condos, as well as large farms. Keep in mind that the breed will have higher exercise requirements if they are living in an apartment, condo, or small house without a yard.

The Scottish collie is a fairly healthy dog with no documented health issues. This is likely due to careful breeding.

The following dog breed registries and organizations recognize the Scotch Collie as a dog breed: