The Sarplaninac, Yugoslavian Shepherd or Illyrian Shepherd is primarily a flock guarding breed originating the the Sharplanina Mountain region of present day Kosovo, Macedonia and Albania. They are very protective and in the absence of flocks will consider themselves household protectors. This breed is good with children and small, non-canine pets if trained and socialized early but will likely remain suspicious and aloof around strangers. These laid-back dogs need light-moderate daily exercise, frequent brushing and plenty of space either indoors or out. Stubborn and independent, they require an experienced, firm owner in regards to training, however, they need little instruction for any work related duties.

Sarplaninacs, also reffered to as Illyrian or Yugoslavian Shepherds, are a flock guarding breed said to have originated in the Sharplanina Mountain region of (present day) southern Kosovo and Northern Macedonia and Albania. This area, called Illyria in the Roman times, partially became the Kingdom of Yugoslavia where these dogs also worked as military dogs in the late 1920's.

Members of this breed are independent, protective and hard-working and required either an experienced or firm owner. They are not for those that don't have enough space for them (apartment, no yard, etc) or those that may consider their frequent barking a problem. This breed will protect the flock and the home, although Sarplaninac attacks on other dogs are not frequent, keep in mind this dog is usually territorial towards other canines or strangers.

This mellow breed is medium-large sized but usually appears larger due to its thick, double layer, weather-resistant coat; the coat is notably thicker around the neck and can be almost any solid color. Sarplaninacs are sturdy looking dogs, overall, with straight, strong backs and deep chests. Males are often noticeably larger than females but, in general, individuals weigh 66-100 pounds and stand 22-28 inches at the shoulders; even 125 pounds in not unusual for this breed. Sarplaninacs have broad heads tapering into relatively short muzzles. The ears are dropped and V-shaped and the eyes, described by the breed standard as "piercing", are chestnut to dark brown. Consider the following Sarplaninac info to decide if this breed is right for you.

The bushy coat is always solid colored-- although they may look bi colored this is usually do to a fading of the color into lighter shades of that same color, or darker tipped hairs resulting in a sable look. The colors considered standard in the Sarplaninac range from white all the way to dark brownish-black; according to the UKC, the most common is color is iron grey. Brindle, for this breed, is a rare mutation that is not often seen. White patches are sometimes present on the chest and feet but the less the better (and preferably not at all). Black Swamp Sars breeders list some common colors as: 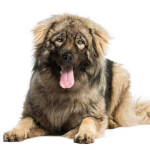 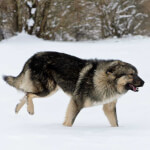 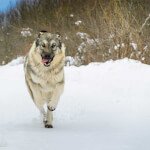 A well treated and well socialized Sarplaninac will be fond of children. They will be affectionate, playful and protective towards them, however, there are drawbacks. Even a baby Sarplaninac is a large sized dog that can accidentally knock over a small child. Also, this protective breed can be very fierce during "guard mode" and anyone, especially a small child, may be injured around a dog fight. Since these dogs don't warm to strangers they may show mistrust towards unfamiliar children, especially if they are over protective due to a lack of socialization.

Below are pictures and images of the Sarplaninac dog breed. 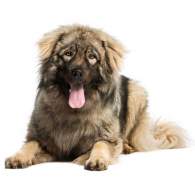 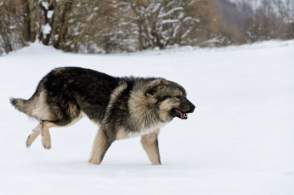 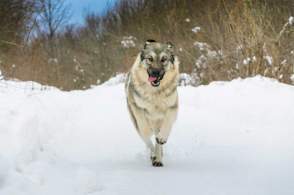 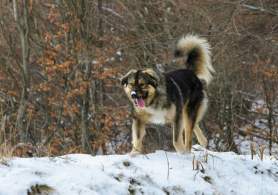 Sarplaninacs often live 10-14 years although, rarely, some have been reported to live up to 17! They are prone to a few health issues that are unspecific to the breed but rather typical of most large breeds.

Some breeders advise that keeping their weight (via good diet) in check is key to longevity-- an obese dog has more health issues. They also advise not to feed your puppy an extremely high protein diet as this can cause rapid growth that can put stress on the body.

The following dog breed registries and organizations recognize the Sarplaninac as a dog breed: