The Saluki is a medium- to large-sized dog breed that originated in the Middle East. Known for its incredible running ability, the Saluki is exceptionally athletic, but typically has a sensitive and mild-mannered demeanor. These dogs have moderate maintenance needs (lots of exercise, a fair amount of training, and little grooming), and are considered very healthy.

Overall, Salukis are best suited for actives families who are willing to provide their dogs with plenty of attention.

Saluki dogs are members of the Hound Group of breeds, and have been used as speedy hunting dogs for thousands of years. Salukies are both sensitive and incredibly athletic, and thus are best suited for active families (especially "outdoorsy" ones!) who can provide their dogs with plenty of TLC.

A few Saluki facts: they're medium- to large-sized (height at the shoulders averages 24 inches, and weigh 50 pounds), with short-haired, silky coats that come in various shades of brown, red, and white. Here are some advantages and drawbacks to owning this swift breed:

A Saluki is part Usain Bolt-level sprinter, part award-winning marathon runner. With their history of hunting swift animals like gazelles and rabbits, the words "Saluki" and "running" are basically synonymous. These lithe, speedy dogs make enthusiastic outdoor companions, and sensitive, affectionate members of any family "pack."

Saluki dogs 101: The Guiness Book of Records has listed the Saluki as being the world's fastest canine, capable of racing upwards of 42 miles per hour. That, combined with their instinctively high prey drive, makes these dogs very difficult to control outdoors; if they see a critter to chase, they will do so--and it's a plain fact that they won't be caught. On the other hand, though, Salukis much prefer living indoors with their human companions. They are natural couch (or "bed") potatoes--and for good reason: Salukis have very little body fat, so they're known to prefer lounging on puffy couch cushions (or king-sized beds, if they're allowed!) because these places provide padding for their bony bodies. It's also a good idea to have a comfortable, padded doggy bed for these animals.

As expected, Salukis are extremely energetic, so they will need a great deal of exercise. The trick is to provide a large outdoor area for these dogs to run--but it'll need to be properly secured, since Salukis will chase any and every moving object they can.

Saluki origin is thought to begin even before recorded history itself. Carvings of animals believed to be Salukies date from about 6,000 B.C., during the Sumerian Empire in southern Mesopotamia (present-day Iraq). Historians further contend that the Saluki, once known as the Gazelle Hound or the Persian Greyhound, had a long, involved association with the Egyptians, as Greyhound-like dogs with ear- and tail-feathering were depicted in numerous Egyptian tomb paintings.

Saluki dogs, the historians believe, often accompanied Egyptian pharaohs on hunts for animals like gazelles and hares; the dogs were considered godlike, and many were mummified along with human royalty. Salukis were also revered by later peoples in Persia (present-day Iran), Syra, Saudi Arabia, and other Middle Eastern countries; nomadic Muslims used these dogs to hunt as well, and referred to Salukies as El Hor ("The Noble").

Subsequent Saluki history remained unchanged for centuries, until British soldiers returning from the Middle East after World War I brought a few breed members with them back to England. The breed quickly became established in Great Britain, and in the U.S. soon thereafter; the breed was officially recognized by the U.K.'s Kennel Club in 1923, the Saluki Club of America was established in 1927, and the American Kennel Club added the Saluki to its registry in 1929.

Today, Salukies are beloved (but relatively few in number) worldwide. The breed ranks 125th out of 202 breeds officially recognized by the AKC.

A Saluki's overall appearance is often compared to a Greyhound: slender (yet muscular), angular, streamlined, and nearly absent of any body fat. Dogs of this breed are definitely built for the speed they're so well-known for.

This breed's body is about equal in length and height (and exceptionally narrow when viewed from the front or rear). The head is the shape of a narrow wedge, with a long, slender muzzle, medium-sized, almond-shaped eyes in various shades of brown, and long, hanging ears that are often covered with abundant feathering. The chest is narrow but deep, the body is long and almost tubular in shape, and the legs are long, thin, and muscular. The tail is long, low-hanging, and often feathered like the ears.

Saluki dog coats are short-haired and smooth. A majority of these dogs have feathering on the ears and tail (and sometimes on the rear of the legs as well), but a few are smooth-coated all over.

Saluki coat colors vary widely, and can be solid, patchy, or grizzled (a close combination of two colors; a black and white grizzle, for example, may make the dog appear gray). Solid white or solid black Salukis are possible, and other common Saluki coat colors (many in combination) include brown, cream, red, grizzle, black and tan, and tri-colored (black, brown, and white). 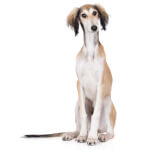 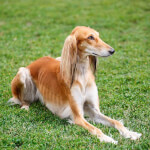 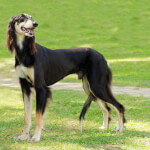 Saluki size can be deceiving. Since these dogs carry very little body fat, their height (and length) is disproportionately greater than their weight. Normal Saluki height varies a good bit, from 21-28 inches; Saluki weight, meanwhile, is 35-65 pounds.

21-28 in
*Height is measured in inches from the front paws to the top of the shoulder while the dog is standing on all four legs.
35-65 lbs

The Saluki breed doesn't see a lot of variation from dog to dog. Breed members are fairly consistent in size and physical features; the only variation is in the coat--specifically, on the ears, tail, and legs. Most Saluki dogs are long-haired and feathered on these body parts, but a few Salukis are short-haired and smooth all over.

Sensitive, intelligent, incredibly active, reserved, and at times stubborn and independent, the typical Saluki temperament is one of delicacy and energy. Dogs of this breed are normally affectionate with their human family members, but aloof and even timid around others. As an athletic breed, they will enjoy various outdoor activities (particularly ones that involve running), yet are perfect couch potatoes when indoors. A Saluki's behavioral traits mix well with other dogs, but this breed's strong prey drive may cause it to instinctively chase smaller pets like cats; likewise, these dogs socialize well with kids, but they may be too active and energetic to be around small children.

As to training, Salukies' response is decent. Some dogs train easily, while others are headstrong and require a good bit of teaching. Consistent, gentle, repetitive training methods work best for these breed members.

Salukies are also fairly good watchdogs, and will typically sound a vocal alarm if facing a potential threat--but due to their inherent shyness, they make poor guard dogs.

Below are pictures and images of the Saluki. 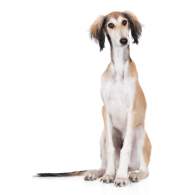 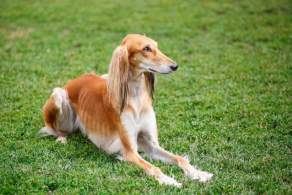 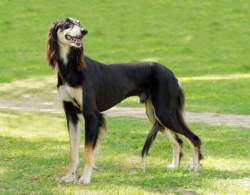 Owning a Saluki can be somewhat of a balancing act. These dogs are quite sensitive, and don't like being alone; though they don't bark much, they can turn destructive when lonely and bored.

A Saluki will also need a varied living environment. A dog of this breed is simply too large and energetic for apartment life; while it will definitely prefer living indoors (and due to its bony physical makeup, will need plenty of padded "lounging" areas), a Saluki will absolutely require plenty of outdoor space in which to run. Still, that space will need to be tightly secured, as a Saluki's high prey drive means it will chase nearly any moving object--and the dog will be nearly impossible to catch if set loose.

The good news: a Saluki is hypoallergenic and doesn't shed much, so this breed is good for allergy sufferers and for those who don't like cleaning up excess hair.

The Saluki is quite a healthy breed, and suffers from few inherited diseases. The main issue among dogs of this breed is sensitivity to anesthetic drugs; other potential health problems include hypothyroidism, cardiomyopathy, and hemangiosarcoma (cancer of the blood vessels and/or the spleen).

Life expectancy for these dogs is 12-14 years.