The Presa Canario is a former fighting dog that, prior to and afterward, was used for herding, driving and guarding livestock, property and family members. This huge breed hails essentially from Spain, as it was the country that owned the not-yet-named Canary Islands at the time the dog was first known. For centuries, there was little known of this dog outside of the Canary Islands, and it has only become wider known since the 1980s when the breed started getting exported to the UK and the USA.

The Presa Canario was raised as a hunting, herding and guard dog, and for a couple centuries it was also developed as a fighter. These days, the breed is used for herding and guarding cattle and as guard dogs for homes and other property. The AKC has this breed noted in its FSS program and therefore has no formal categorization. The FCI classifies Presa Canarios as a "Swiss Mountain and Cattle dog." To be sure, these dogs are not at all for first-time families. Even if you are experienced with the breed, small children and small pets will make living with a Presa Canario extremely difficult. Consider these Presa Canario facts:

The temperament, background, name and just about everything else regarding this breed tends to have at least two hotly opposed camps vying for their perspective's acceptance (Dogo Canario vs Presa Canario). Because of this, Presa Canario information is both widespread and limited.

At the center of the maelstrom tends to be the dog's moderate intelligence and whether the breed is inherently vicious or is being exploited by dangerous people. There are stories through the centuries about the dog's ability to determine threats as well as choosing to disobey his master at inopportune times. One thing is sure: this dog knows he can be unstoppable if he so chooses.

Under the direction of an able human alpha, however, the Presa Canario can be a perfect family dog. When properly trained, constantly socialized and correctly managed, he is calm, protective (rather than aggressive) and adeptly aloof of strangers.

As these dogs come from hundreds of years of herding, hunting and fighting, they naturally possess a lot of energy along with their obvious strength. They may be calm when not exercising — but only if they get the extraordinary amount of daily working out that they need.

The Presa Canario history is a long and intriguing one. Perhaps the most notable point is that the Canary Islands, originally called the Island of Dogs, are named after them. (The Spanish term for dog, or canine, is "cane," which is pronounced kha-nay.) This nevertheless ancient dog — which is documented to have been around in the 16th century — is somewhat new in that the Spain-based Real Sociedad Canina de Espana (RSCE) recognized the breed as late as 1989.

It is believed that conquering Spaniards introduced Mastiff-style dogs to the isles in the 15th century. If you are wondering what breeds came to make a Presa Canario, they are thought to have been the Iberian Presa, sundry bulldogs (by way of British colonists in the 18th century) and a sheepdog called the Bardino Majorero. For the first few centuries, the dogs were used for guarding and driving cattle, killing predators and hunting down prey. At times, however, they themselves were hunted when their populations grew too large.

The dogs of this archipelago eventually came to be called Perro de Presa Canario (the "Canary Dog of Prey"). They were first known outside the islands when an historian, Agustín Millares Torres, wrote about them in his 1881 book, Historia General de las Islas Canarias ("General History of the Canary Islands").

The dogs were also trained for fighting as sport; that was outlawed in the 1940s. Although they were still used for farming purposes, their population declined. In the 1970s, interest was renewed and the dogs became somewhat generalized under the name Presa Canario. Clubs started to spring up in the early 1980s, some of the dogs were exported to the U.S.. By the mid-1990s, the American Kennel Club (AKC) was taking notice.

Although the breed is not formally recognized by the (AKC), its current development is registered under the club's Foundation Stock Service (FSS). The United Kennel Club (UKC) and Fédération Cynologique Internationale (FCI) do recognize the breed, although the FCI recognizes the breed as Dogo Canario, which is a whole other controversy. Some people and clubs believe the Presa and the Dogo are two different breeds, whereas others claim "both" dogs are one breed — all of which continues to make the history of the Presa Canario rich indeed!

The Presa Canario is a massive dog that is often ready to spring into action immediately-- these are very sturdy They look strong and sleek, and they are indeed much stronger than what they may even appear.

The huge, broad and somewhat squared jaw, the large lips, and the slightly domed head is perhaps the most prominent set of features on this daunting dog. In some countries, Presa Canario ear-cropping is not legal; Presa Canarios with uncropped ears will flop down close to the head, but the Presa Canario ears are cropped, they will stand erect. Either way, they will look a bit small — just like the deeply inset eyes — and the great chest and powerful hind legs will complete the look of a dog that is built to last. The tail, which is rarely docked, is thick at the base and tapers to a medium-length tip.

Like every other aspect of the Presa Canario, so too are the dog's many shades of its very few colors rather controversial. The Spanish Government has a decree regarding the legal colors and despite this decree, there remains contention. One example is the black Presa Canario (which is now allowed) as, previously, only the many shades of the fawn and brindle Presa Canario were recognized:

There have also been attempts at producing a so-called blue Presa Canario. Such attempts have been rejected outright for apparently poisoning the purity that both camps — Presa Canario and Dogo Canario — have long sought to keep. 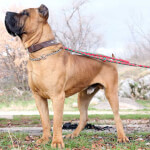 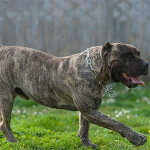 The Presa Canario weight is indeed impressive. Mature males can weigh from 100 to 145 pounds(on average), and females are a fair amount lighter at 85 to 120 pounds. What is even more intimidating about the Presa Canario size is that these dogs tend to be very tall too. The fully grown female stands around 22 to 25 inches and the males are a good bit larger: 23 to 26 inches tall. Understanding the somewhat potentially feral disposition of this dog is sure to make the Presa Canario size and weight somewhat frightening.

22-26 in
*Height is measured in inches from the front paws to the top of the shoulder while the dog is standing on all four legs.
85-145 lbs

Determining the Presa Canario variations — and if there are any, which makes the matter all the more messy — is no easy task. Some kennel clubs and registries say that the Presa and Dogo Canario breeds are one and the same. Others say that they are distinct and that the big (and biggest) Presa Canario comes from Grand Canary Island whereas the slightly smaller Dogo Canario comes from Tenerife (another of the Canary Islands). Further confusion is inbred by the FCI, which requires registration of either dog as Dogo Canario, while the AKC's FSS program appears to give note only to the Presa Canario even as it refers to the FCI's standard (as the Dogo Canario).

For those who wish to know the differences between the two Canarios, there are the breeds that built them. The huge Presa Canario came about by introducing Great Danes and other mastiffs to the Perro de Presa Canario. Apparently for the sake of show, the Dogo was produced by using Bulldogs, Staffordshire Bull Terriers, Pitbulls, Dogues de Bordeaux and Great Danes. The latter dog was produced to temper the former dog's ferocity. As the giant Presa Canario can be a very difficult dog, you can see why they might need some other bloodlines!

There have also been attempts to produce a blue Presa Canario, but as the "blues" are said to not be "pure," this variation has been met with derision by lovers and breeders of the Presa.

The Presa Canario temperament has many fragile aspects: "fragile" as in it takes little to provoke this dog even as it requires a lot to train, socialize and master him. While these massive purebreds can be delightful family dogs, the prevention of its aggressive tendencies simply must start when they are very young puppies. These dogs are suspicious of most everything, and coupled with their extreme strength makes it necessary only experienced and well-trained handlers should attempt managing the demanding Presa Canario personality.

To say the Perro de Presa Canario temperament is strong willed is an understatement. These dogs, once properly trained, are unhesitantly loyal, courageous and incorruptible. As this ancient dog is believed to be atavistic, he tends to recognize only superior dominance. He cannot be "bribed" — like most all other dogs — with meat, treats and other things meant to distract him from protecting his established property and family.

Three Presa Canario traits stand out, however: the aloofness, the "gaze" and the bark. Because of his unnerving gaze, his aloofness is too often confused with aggression when it merely means he's watching you. Although Presa Canarios don't bark much, they do tend to give a warning bark, and it is neither small nor meant to be ignored-- like this breed, it is a huge, harsh and serious sound.

As a family dog, the Presa Canario can be an excellent companion, watch dog and home security system all rolled up into one massive, lovable and playful package. When it comes to the Presa Canario and kids, this dog breed can be good — if properly trained. These dogs are highly protective if often calm. It cannot be stated enough times that Presa Canarios must be managed correctly around all ages-- from babies to adults. You need to be experienced with this breed, and family members have to be comfortable around large dogs.

Below are pictures and images of the Presa Canario (Dogo Canario). 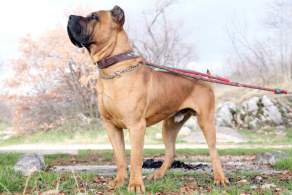 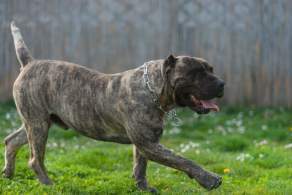 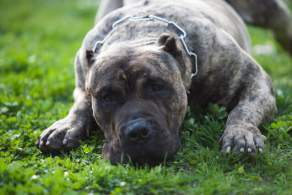 Owning a Presa Canario is no easy task; it is a great, daily and lifelong responsibility. It is also a dog best suited for homes with large, very well-secured yards and loads of space to run freely. Apartment dwelling is not good for these huge, otherwise active dogs who can be alarmingly sedate when cooped up — until they are no longer sedate. Bored Presa Canarios are destructive and dangerous dogs. Furthermore, small pets are not recommended in homes with this hunting breed. Although Presas can be socialized with smaller pets, it is a daily duty to monitor and socialize them.

First and foremost, however, you should make sure that it is legal to possess a Presa Canario. Your homeowner's association, state or county may prohibit ownership of this breed.

Presa Canarios tend to have few health problems, but those to which they are susceptible are typical of large, active dogs. There are a few more specific concerns as well, and those usually have to do with epilepsy, OCD, the sex of the male and the skin of both males and females.

The typical lifespan for the Presa Canario is 10 to 12 years.

The following dog breed registries and organizations recognize the Presa Canario as a dog breed: