The Pom-A-Pug is known by many names, but no matter the name, they each represent the puppy produced by cross-breeding two too-cute purebred parents: the Pomeranian and the Pug. This small hybrid has few health problems (although a couple of them can be severe), is not hypoallergenic and is a wonderfully intelligent and agile companion. They are a bit on the expensive side in most every way, but if you are ready to adopt one, they will be worth it!

The Pom-A-Pug is sure to be a classic companion dog. Although its purebred parents rank high in the obedience and agility categories for American Kennel Club-related dog shows, this hybrid is not formally recognized. This is a great dog for people who live and work at home, don't have young children and have a modest abode with a well-fenced yard of most any size or just an apartment. They may be a bit challenging depending on which parent breed is stronger, but they are suited well enough for first-time families.

This small, somewhat hyper (in attitude) and nevertheless relatively active hybrid dog is squeezably cute. Pom-A-Pugs can be decent watch dogs as they are alert and only tend to bark when approached by strangers. They will entertain themselves by exploring constantly. These dogs will want to keep you nearby, however, and if you are frequently gone they will most likely develop separation anxiety.

Pom-A-Pugs are very intelligent dogs, and they are independent — to a degree (they will ultimately want to please you). They will try to get you to feed them all the time and have a propensity for becoming obese, so be careful with treat based training. If your Pom-A-Pug has a preponderance of Pomeranian over Pug, he may be on the cocky side with his clever ways.

This cute mixed breed is sure to be loyal, and depending on which parent breed is the dominant one, he may bark very little or perhaps whenever he wants something and you're not "on the spot" enough! Regardless, he'll want to be at your side most the day — except when he doesn't, at which time he will most likely be off exploring nearby. If he has a Pom dominant personality, however, he may not be very patient with young children.

The Pug is a rather sturdy dog that can handle a bit of rougher play than you might think, and if your Pug-A-Pom has more Pug than Pom, he may be the same. While he may rest in your presence and lead you to believe he's a bit lazy, it's when you're not watching that this hybrid tends to be more active.

The Pug Pomeranian mix, full-grown, will weigh anywhere from 7 to 15 pounds and stand between 8 and 13 inches high. These small hybrid dogs may look larger than they actually are if they inherit their Pomeranian parent's puffy coat, however, so be sure to use a scale to determine his actual weight.

8-13 in
*Height is measured in inches from the front paws to the top of the shoulder while the dog is standing on all four legs.
7-15 lbs

Below are pictures and images of the Pom-a-pug dog breed. 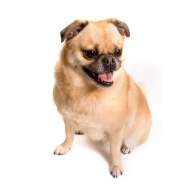 Some hybrid dogs have purebred parents that are paired so as to eliminate the possibility of inherited diseases. The Pug-A-Pom's primary purpose is as a cute companion, however, and such things as health seem to be of little concern. You should be prepared to shell out the cash to keep one of these dogs in as good a shape as you can. These mixes tend to have significant skin problems as well as serious respiratory ailments caused by both their intentionally bred pushed-in faces and ever-smaller bodies.

Things to watch out for include:

With the proper amount of exercise, careful handling and a well-managed diet, your Pom-A-Pug should reach his expected life span of anywhere from 8 to 12 years.

The following dog breed registries and organizations recognize the Pom-A-Pug as a dog breed: