The polish tatra sheepdog is a purebred dog from the Tatra Mountains in Southern Poland. They were originally bred by Romanian shepherds to herd and protect large numbers of livestock.

The tantra is a bit more well rounded than other sheepdogs as they are less aloof and can adapt to family life fairly easily without having strong instincts to wonder. They have strong guarding skills, but will rarely attack as their instinct is to prevent threats by intimidating them without becoming physically aggressive.

Below are the various details and breed characteristics you can expect from a polish tatra sheepdog:

The polish tatra sheepdog is a large dog breed which can stand as tall as 28 inches from ground to shoulder and weigh as much as 130 pounds. They are extremely strong and sturdy dogs.

The breed is known for its solid white coat. This thick double coat allows them to withstand both cold temperatures and dry heat. The white coloring was useful as it helped the breed blend in with sheep but also let herders recognize them as a dog and not a bear or wolf.

As a sheepdog, tatras are an alert breed. They are surprisingly agile for their size and are extremely territorial with their home, family, or flock. Tatras will usually not attack anything that threatens their territory. Instead they will stand their ground and intimidate the threat by barking, growling, and charging. Generally this method works since the breed is large and has an extremely loud bark. The breed will only bite if there is no other method of keeping the threat away from the tatra's territory. This anti-pursuit behavior is also an indication of the breed's high intelligence. Sheepdogs which leave the flock to pursue a threat will leave the flock open to other attacks, which the tatra is aware of.

The polish tatra sheepdog can be used for other services other than watching sheep. The breed has also successfully been used as a guard dog for both property and people and their wooly coat can also be shaved and turned into wool.

Tatras are a very loyal dog who excel as watchdogs. They are territorial and protective over their family's property. Tatra's are an alert dog breed with a very loud bark and will bark at anything suspicious. They are considered friendly dogs and will not be aggressive towards strangers which are welcomed by their master. It is recommended to socialize the breed as a puppy and consistently throughout adulthood to keep the dog well balanced. Although tatras are intelligence, they can be stubborn so they are not recommended for owners without previous dog experience.

The polish tatra sheepdog is an ancient dog breed. They have been used as sheepdogs in the Polish mountains for well over a thousand years and because of this their instincts for guarding are close to perfection. Due to the age of the breed any records of their bloodline or breed birth have been lost or forgotten. However, many dog experts expect the breed is a descendant of the mastiff dog breed.

The breed was used primarily as a sheepdog for centuries due its size, intelligence, and behavior. It wasn't uncommon for some polish tatra sheepdogs to be used for other tasks such as guard dogs for property and people.

Similar to many European dog breeds, the polish tatra sheepdog nearly went extinct during the world wars. The breed was saved by dog connoisseurs and the Federation Cynologique Internationale helped restore the breed. Thanks to the FCI the breed is still available today, however the polish tatra sheepdog is considered a very rare dog. It is estimated that less than 10,000 exist in the World today.

The polish tatra sheepdog is a large breed dog. Males can get as big as 28 inches tall and weigh as much as 130 pounds. The breed has a thick double layered coat with a wavy curly top which is hard to the touch. All tatras have a solid white coat with no other color markings.

The tatra does not have any color variation. All polish tatra sheepdogs have a solid white coat with no other color markings.

The polish tatra sheepdog is a large to giant dog breed. Males can get as tall as 28 inches from ground to shoulder and weigh over 130 pounds. Their large fluffy coat makes the dog appear even larger which deters many people and animals from purposefully crossing paths with the breed.

24-28 in
*Height is measured in inches from the front paws to the top of the shoulder while the dog is standing on all four legs.
80-130 lbs

Centuries of watching and guarding sheep have turned the polish tatra sheepdog into the ideal watch dog. They are very alert dogs and will watch over their family and property for any suspicious activities or intruders.

Their high intelligence allows them to assess situations before taking action so they can better determine the ideal response to deal with any scenario without needing human guidance. Because of this, they are often good with pets, strangers, and children as long as they are welcomed by their family. Unwelcomed guests will find it difficult to get by the tatra unchallenged. Tatras will not bite unless they are directly challenged by another animal or person.

The polish tatra sheepdog is an independent dog that thinks for itself, so they can be difficult to train. The breed does best with owners which are intelligent strong leaders, preferably with previous large dog breed experience.

The breed is friendly with well behaved children. Kids that want to play, grab tails, and pester pets can annoy the tatra. Although tatras rarely bite, their bark may scare young children.

As guard and watchdogs the polish tatra sheepdog is suspicious of any strangers and will bark to give anyone trespassing a quick warning. With that being said, strangers which are welcomed by their owners are generally accepted, although it may take a while for the tatra to completely warm up to new guests.

Below are pictures of the Polish Tatra Sheepdog dog breed. 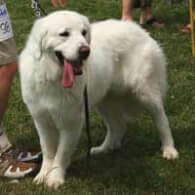 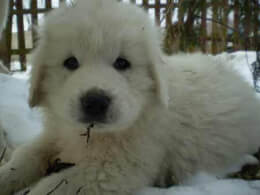 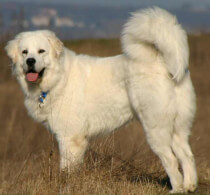 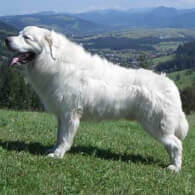 The tatra is a medium to high maintenance dog breed. Their coat will shed twice a year and requires a lot of upkeep during this time. If kept as an indoor dog, tatras will shed year-round. The breed does not drool (unlike other large breed dogs).

The breed has high exercise requirements and will need daily walks. While they can stay indoors for periods of time, their watchdog instincts make them want to be outside so they can watch the property. Because of this they are not recommended as apartment dogs.

The polish tatra sheepdog sheds its coat heavily twice per year. During this time they will need to be groomed several times per week. The rest of the year their coat does not shed and is self cleaning, so it requires very little care.

Tatras which are kept indoors will shed consistently throughout the year.

The tatra needs daily exercise. Centuries of roaming fields and watching sheep have given this dog high amounts of energy that a simple daily walk will not suffice. Tatras kept outside in large yards will need less exercise than tatras which are kept as indoor dogs.

Tatras do best on properties with large amounts of land with opportunities to run to burn off some energy. They have a strong watch dog drive so they will want to be outside so they can resume their instincts of watching their families property. Because of this, polish tatra sheepdogs are not recommended for apartments or condos.

The polish tatra sheepdog is considered a healthy dog breed (especially for a purebred dog). The most common health issues are associated with their size (as opposed to a lack of gene diversity).

The following dog breed registries and organizations recognize the Polish Tatra Sheepdog as a dog breed: