The Pocket Beagle, sometimes called the Miniature Beagle or the Teacup Beagle, is essentially a smaller variant of the Standard Beagle. Having originated in England to hunt small game, these dogs are lively, curious, affectionate animals that have a nose – both literally and figuratively – for mischief.

Below are details and specs for the Pocket Beagle dog breed.

As small-sized dogs, Pocket Beagles typically weigh 7-15 pounds, and are 7-12 inches at the shoulders in height.

These dogs are lively, affectionate, and mischievous, and are great family pets, though they may require some obedience training. Pocket Beagles tend to bark and howl a lot, but will be friendly to family members, pets, and even strangers.

A low to moderate amount of grooming, exercise, and training will be needed.

Variations of this breed are believed to have existed in England centuries ago. During the sixteenth century, Queen Elizabeth I is said to have owned a Beagle small enough to fit in her glove. Since then, the debate has continued over whether the Pocket Beagle is a distinct breed, or just a small variation of the standard Beagle. Arguments notwithstanding, though, this miniature version of the Beagle has gained notoriety; through the centuries, English hunters used the smallest Beagles in their packs for hunting game like rabbits and fowl, as the small dogs could scramble under bushes and into holes far better than their larger counterparts. The hunters also discovered they could carry these dogs in their saddlebags while they rode horses, meaning they could travel further to and from a hunt than if accompanied by larger Beagles (in which case the hunters could only travel on foot). These small Beagles grew in popularity, and hunters started breeding their smallest dogs together, eventually creating a "breed" known as the Olde English Pocket Beagle. (This name was selected because of the dogs' ability to fit in saddlebags.)

By the early twentieth century, hunting became less popular, so these dogs were seldom used; by the mid-1900s, they were considered extinct. But decades later in the U.S., probably during the designer dog craze at the end of the century, breeders recreated the Pocket Beagle with the same selective breeding techniques of using only the smallest standard Beagles, and possibly adding small dog breeds like Pomeranians and Chihuahuas to the lines. Today, these dogs are fairly rare, and exist mainly in the United States.

A Pocket Beagle has a short- to medium-length, smooth, water-resistant coat. This breed's small body is normally about equal in length and height. The head is rectangular; the eyes are large, wide-set, and brown or hazel in color; the ears are low-set, large, and floppy. The chest is both deep and broad, the legs are medium-length and straight, and the tail is high-set, medium-length, curved slightly, and is usually carried erect.

This breed has the classic hound's coat; colors include tan, white, brown, yellow, black, and red. A wide variety of color combinations exists; parti- and tri-colored coats are the most common. 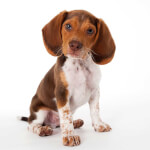 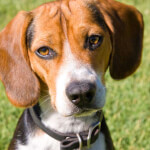 This is a small-sized breed. Height is 7-12 inches at the shoulders, and weight is 7-15 pounds.

7-12 in
*Height is measured in inches from the front paws to the top of the shoulder while the dog is standing on all four legs.
7-15 lbs

Intelligent, lively, curious, and independent, Pocket Beagles are sweet, tail-wagging bundles of happiness that seem to actually enjoy getting into mischief. Though they're friendly dogs that will be extremely affectionate to practically everyone, Pocket Beagles, like their larger Standard Beagle relatives, can be stubborn and willful, and will require some obedience training, particularly with housetraining. And Beagles – both the Pocket and Standard varieties – will howl incessantly unless trained to minimize this vocalization. Since they are scenthounds, Pocket Beagles will follow their noses anywhere, including away from their owners if allowed; close supervision is recommended for these dogs.

These dogs will socialize well with other animals; due to a high prey drive, they may instinctively chase cats.

Pocket Beagles normally treat strangers – like anyone else – with plenty of friendliness.

Below are pictures and images of the Pocket Beagle. 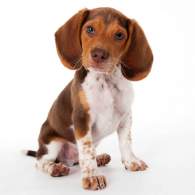 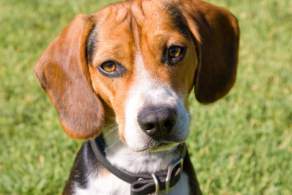 A moderate amount of care is needed for these dogs. A good bit of obedience training may be necessary; little grooming will be required, and a good bit of exercise will be needed.

These dogs shed moderately. Brushing in necessary only once per week, and baths only 2-3 months. The floppy ears should be checked regularly to prevent infection.

Pocket Beagles will need a good deal of physical activity, particularly as adolescents. Any outdoor games that allow the dog to run are great, provided it is supervised closely. Long daily walks, with the dog always leashed, are another preferred activity.

These dogs are suited to any living space. If kept in a yard, a fence is highly recommended, as Pocket Beagles tend to wander easily.

Because of their shorter coats, Pocket Beagles fare better in warmer climates.

The following dog breed registries and organizations recognize the Pocket Beagle as a dog breed: