A jolly gentle giant, the Old English Sheepdog is a highly distinct breed with a fantastic personality. He loves people and should get along with other animals just fine. Don’t be surprised if he starts to nudge the kids or other dogs around—he is just exercising his old herding instincts. These dogs are very intelligent and quick to learn; give them a task and they’ll give it their utmost effort.

If you see one of these dogs on the street you’re likely to get a faint hint of recognition - Old English Sheepdogs have been featured in many films and television programs including Chitty Chitty Bang Bang and The Little Mermaid. With their highly distinct shaggy coat, these dogs are hard to miss. If you’re planning on adopting one, it is very important to keep in mind that their coat will require more care than the average dog. Some owners spend three or four hours a week brushing and grooming. They also need a moderate to high amount of daily exercise if not engaged as a working dog. But if you’re looking for a dog that is plenty of fun and full of charm, the Old English Sheepdog surely won’t disappoint.

Below are the details and specs for the Old English Sheepdog.

The OId English Sheepdog is a large sized breed. Adult males will reach a height of 22 - 24 inches tall from ground to shoulder and weigh 70 to 100 pounds. Females are slight smaller, they will reach a height of 20 - 22 inches tall and weigh 60 to 85 pounds. These dogs will make for great workers but are also known to be very adaptable; if given an adequate amount of exercise they can live in apartments or smaller homes.

These dogs are truly gentle giants. Known for their easy going demeanor, their intelligence, and their clownish behavior, these dogs are great in families, including those with kids and other pets. Understandably, given their herding pedigree, some of these dogs may try to herd the kids or other animals around the house or yard with a gentle push.

This is a high maintenance breed. Their long, shaggy coat will need daily grooming; some authorities declare that a minimum of three hours a week should be spent on this dog’s coat. In addition, they are heavy shedders. Though some of these dogs may act as couch potatoes, it is still important to give them a fair amount of exercise each day, lest they get out of shape.

The origins of the Old English Sheepdog are not exactly clear - early records of the breed either were not kept or were lost over time. Evidence suggests these dogs may have been offspring of the Scottish Bearded Collie or the Russian Owtchar, though even these are merely guesses. What seems certain is that this breed was first encountered in Southern England somewhere in the early 19th century, among farmers who used the dog to drive cattle and sheep to the market. These dogs had docked tails to signify their working status, and were often referred to as the Smithfield or the Cotswold Co.

In 1873 the breed was first shown in Birmingham, England, though it was then known as the Shepherd’s Dog. By the 1880’s these dogs were being exported to the United States, where they were mostly kept as companions to the very wealthy. In 1885, the American Kennel Club recognized the breed. In the following years leading up to World War I, Old English Sheepdogs were owned, shown, and bred by five of the wealthiest United States families. According to legend, a show superintendent at the 1904 Westminster Show told the judges to "take plenty of time; the dogs in the ring are the property of some of our leading Americans".

In 1904, Henry Arthur Tilley founded the Old English Sheepdog Club of America. He and his brother, William Steeds Tilley, were the driving force behind creating the official breed standard. A large percentage of Old English Sheepdogs in America can trace their lineage to dogs that were bred by these brothers. Up until the 1950's this breed was still seen as a dog of the bourgeoisie. By the 1960s, however, these dogs had changed from being a status symbol to a family pet. In the mid 70's about 15,000 dogs were being registered annually, but that number has since declined.

The Old English Sheepdog is a muscular, square framed, and well-balanced dog. Most notable about this breed's appearance, however, is his abundance of hair. This dog's coat is long, moppish, shaggy, and instantly recognizable - Old English Sheepdogs have featured in a wide variety of films and television programs. It is a heavy double coat, textured on the outside and soft and dense on the inside.

The hair even appears as though it is blocking the dog's eyes at times and gives the dog a refined, whiskered look. The floppy ears lie flat to the head. Traditionally, the Old English Sheepdog's tail was docked due to sanitary concerns (resulting in a bear-like rear end), but these days many of these dogs retain their tails, as many countries have banned cosmetic docking. The long tail has the characteristic long fur, is low set, and hangs down unless the dog is excited. This dog hold its shoulder slightly lower than its rump, giving its gait a bear-like gallop.

Coat colors include gray, grizzle, blue or blue merle, brown, and fawn. These colors are almost always mixed with white markings on the face, chest, and/or legs. 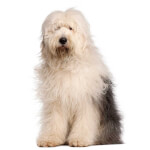 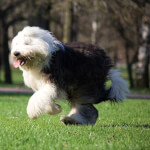 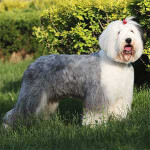 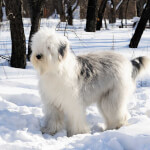 20-24 in
*Height is measured in inches from the front paws to the top of the shoulder while the dog is standing on all four legs.
60-100 lbs

These dogs are great fun and excellent workers when given a job. Often described as playful, affectionate, clownish, and intelligent, the Old English Sheepdog is one who delights in learning and playing games with his family as well as running around with his animal friends. These dogs retain their puppy-like disposition for quite some time; adolescence in this breed often extends to about age three, and an adult will still be playful and energetic well into his middle age. At a certain age, however, these dogs might start to get lazy. The New Zealand Kennel Club says these dogs are prone to become couch potatoes!

These dogs are quick learners and should not be terribly difficult to train. They are eager to please and love to have a job; if they are not engaged in their traditional activity of herding, these dogs are capable of being watch dogs, show dogs, search and rescue dogs, and more.These dogs do suffer from some separation anxiety and do not enjoy being left alone for long periods of time. They shouldn’t be kept separated from the family; let them hang around inside the house. A well raised Old English Sheepdog is social and friendly, and though they can be watchful over their loved ones, these dogs shouldn’t be expected to be a fierce guard dog.

A properly raised and well-socialized Old English Sheepdog is an affectionate and gentle companion for the kids. Some owners say that he has a tendency to watch over and herd young children, gentle nudging them to stay in a particular area.

This breed has long been around other domestic animals and should get along well with other dogs and pets. As with most breeds, however, it is still important to socialize this dog with other animals from a young age to get the best behavior.

These dogs are not aggressive and should not pose a threat to strangers. Some individuals have been known to bark to alert their owners of new people, some do not. Generally, these dogs are a bit too unaggressive to make for proper guard dogs.

Below are pictures and images of the Old English Sheepdog. 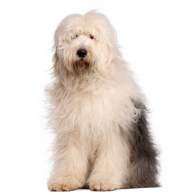 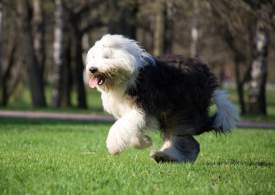 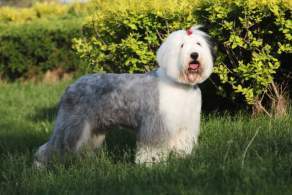 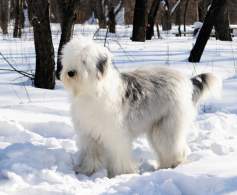 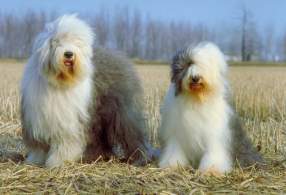 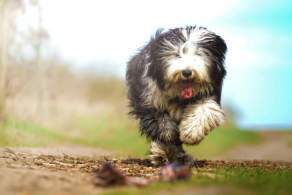 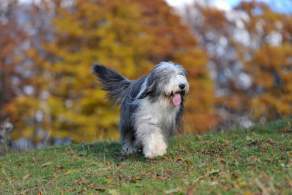 This is a working breed that has ample stores of playful energy, and therefore requires a moderate to high amount of daily exercise or a job to do. Their long, shaggy coats need more care than most dogs. Expect to spend a few hours grooming each week, a bit less if the coat is clipped short. Be prepared to budget for clips and grooming if you are not willing to do it yourself.

Old English Sheepdogs need more grooming than the average dog, and they should be introduced to this practice early in life. Brushing and grooming will be a bonding experience for you and the dog should you decide to do it yourself. If you opt to have a professional do the dog’s grooming, be prepared to budget for the cost; too many of these dogs end up in rescue shelters because their owners did not know how much grooming this dog requires. These dogs also shed a lot. It would be wise to have a vacuum on hand to clean up the extra hair that this dog will inevitably spread around the house.

The nails on this dog are fast-growing and should be trimmed regularly with a nail clipper or grinder to avoid overgrowth. If you hear clicking on the ground, they are way overdue. Their ears also need to be checked regularly to avoid a buildup of wax and debris which can result in an infection. Teeth should be brushed regularly.

This is a working breed and therefore it needs its exercise to feel properly mentally and physically stimulated. If they are not doing a job such as herding, these dogs should be exercised for a minimum of one hour each day. Jogging and games like fetch should suit this dog well.

Puppies need an outlet for their great stores of energy, but be careful not to over exercise them and hurt their developing joints. Older dogs may be more lethargic and even seem to prefer sitting on the couch all day. While this is cute, owners should make a point to exercise these dogs as their physical health depends on it.

This breed is surprisingly adaptable. Though they feel most at home in a rural location with lots of land in which to run and frolic, these dogs will not be unhappy in an apartment or suburban setting as long as they are receiving the proper amount of exercise. Old English Sheepdogs should not be kept outside all day and night or similarly neglected. They need to be allowed indoors so they can spend time with their family.

Due to their heavy double coat, these dogs are at risk of overheating in hot weather. Do not take them out for vigorous exercise when it is hot outside.

The average lifespan of the Old English Sheepdog is about 10-11 years. Breeders of this dog are required to conform to a code of ethics in order to reduce incidents of hereditary disease, but it is still uncertain what percentage of dogs suffer from various issues. Some diseases that are being investigated include hip dysplasia, cataracts, deafness, and diabetes. Heatstroke is also a concern for these animals; care should be taken not to over-exercise these dogs or leave them outside in hot weather for too long. Cancer is also a major cause of death.

The following dog breed registries and organizations recognize the Old English Sheepdog as a dog breed: