The Norwegian Elkhound is an ancient Spitz-type dog from the Scandinavian region. These formerly fearsome hunting dogs are wily, untiring and highly dominant. While they could hunt elk if need be, they were used to hunt moose and other large, dangerous animals. Also, they aren't hounds. Their name comes from the Norwegian term Norsk Elghund. In English, this may sound a bit like Norwegian Elkhound, but in Norwegian, it means "moose dog."

When it comes to Norwegian Elkhound facts, it is easy to find out if adopting one of these dogs will work for you. These are highly focused dogs whose ability to weather cold climates, rocky mountains and large prey is greatly appreciated in the Scandinavian regions. They are excellent hunters, great guard and watchdogs, and splendid family companions. They are not for idle people or small homes, however, nor places with pets. They are probably not the best for first-time dog owners either. They require a lot of patience, an unswerving alpha and an endless patience for their challenges.

Here are some Norwegian Elkhound pros and cons

Norwegian Elkhounds are hardy, demanding and energetic dogs that demand masters who are always ready to take charge and be active. They are great family dogs with a wonderful sense of humor but who will be aware and ready for work and defense at a moment's notice too.

While they have been known to charge through plate glass in pursuit of prey, they are not dumb animals; they are simply dedicated to the game. This breed ranks 36th in the Intelligence of Dogs list published by Stanley Coren. It is one of the many traits that puts them well above average. They know how to communicate with seasoned hunters, how to not give away their presence when hunting and how to reserve their strength for a long session of quarrying large game.

These dogs are extremely independent. Training them is not easy, and yet it must be done with patience, consistency and tangible rewards. Their stubbornness may be frustrating, especially when they are non-plussed about your possible impatience. They'll be there when you really need them, but don't be surprised if they go running off when they feel like it.

As these dogs come from thousands of years of being nomadic hunters in a frigid environment, they are highly active. Removed to warmer climes, they still need to remain highly active. You should research as much Norwegian Elkhound information as possible if you are thinking of adopting one.

Norwegian Elkhound history is rich, long and intriguing. Skeletons of similar Spitz-type dogs buried with Norsemen have been found that date back as far back as 4,000 BCE. It is firmly believed that the ancestors to Norwegian Elkhounds traveled alongside the Vikings as they plundered the seas and shores. They also apparently used these dogs on the homestead for hunting, herding, guarding and companionship. Much of the development of the breed may have happened in the last few centuries, however. DNA evidence has been found in these dogs of an extinct species of gray wolf from nearby regions.

Of course, the Vikings didn't leave any written records meant to preserve their adventures and legacies. It took a very long time before Norwegian Elkhounds were written about. That started around 1877 when the Norwegian Hunters Association first noticed the dogs. Members sought to retain as much history as far back as possible, and pedigrees were traced back as far as they could. These records helped form the breed's studbook, the Norsk Hundestambak, and upon it was formed the Norwegian Kennel Club. That same year, the Club held its first dog show. As the show was held in Oslo, much was said about Norwegian Elkhounds throughout Europe. The dogs became very popular rather quickly, and they were exported to many countries soon thereafter.

The breed was entered into the American Kennel Club (AKC) studbooks in 1913. A full decade later, the UK-based Kennel Club (KC) formally recognized Norwegian Elkhounds. That same year, 1923, the British Elkhound Society was formed to prompt that KC recognition. By 1930, the AKC had also recognized the dogs, a move which was likely petitioned by the Norwegian Elkhound Association of America. That Association, which had been basically founded in 1930, became a club member of the AKC in 1935.

Today, the Norwegian Elkhound is the National Dog of Norway.

As puppies, these dogs are born with black coats. As they mature and acquire their adult coats, their colors will change. It is very hard to tell what color a Norwegian Elkhound puppy will be once grown up, although people often try to do so.

The colors that these dogs grow into are: 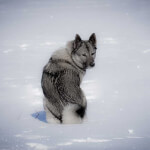 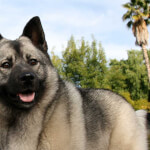 The average Norwegian Elkhound size is only slightly different between males and females. Typically, full-grown males weigh 53 to 57 pounds and stand approximately 20 inches in height. Females are just a little less in both ways. They have a weight of 45 to 50 pounds and stand about 19 inches.

19-20 in
*Height is measured in inches from the front paws to the top of the shoulder while the dog is standing on all four legs.
45-57 lbs

The Norwegian Elkhound temperament encompasses a lot: close family bonding, dedicated loyalty, and stubborn resistance. These are pack dogs through and through, and you will have to prove you can and will be their alpha. You will also need to offer more than mere "atta boys" and a pat on the head as rewards for even obedience training. These are dogs who know their value, understand their strength and demand significant rewards for indulging behavior they wouldn't otherwise do.

Although the typical Norwegian Elkhound personality is one that appreciates human contact and attention, they are also prone to do what they prefer to do: bark and chase things. It is well known among Norwegian Elkhound owners and clubs that most people will have little success quelling the loud barking and the somewhat unstoppable sprints. These are simply Norwegian Elkhound traits that are part of the dog's nature.

Below are pictures and images of the Norwegian Elkhound. 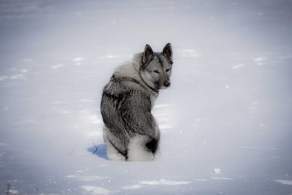 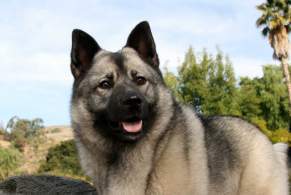 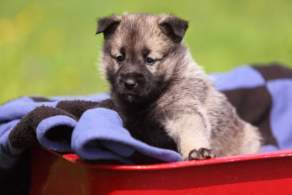 Bold, beautiful and belligerent might best describe these great and ancient dogs. If you give them a full day of fun and exercise, however, they will curl up with you by the fire and in bed for the night.

These dogs are not for apartment living. They need a lot of outdoor space, and they need to be restrained at all times. They can jump very high, and they are fearless when they get a scent to chase. They will find cats irresistible, and they won't back down from a fight. One thing you should understand is their barking: it is loud and full. As hunters, they bark to alert their masters from afar and they have a booming voice.

These dogs have a double coat that will shed constantly and blow out at least twice annually. It should go without saying that those who wonder, "Is a Norwegian Elkhound hypoallergenic," should know it's a resounding "No!"

Norwegian Elkhounds are more than fairly healthy dogs. While there are a few problems to which this breed is specifically prone, the native environment and hardy heritage of this breed has long kept many problems at bay. Still, there are basic dog health issues that can occur, especially when these dogs are brought up in places far from their native region.

Some of the problems that have been noted to affect Norwegian Elkhounds are:

The average lifespan for a Norwegian Elkhound is 12 to 15 years.