The Morkie is a very small hybrid dog cross-bred from two toy breeds: the Maltese and the Yorkshire Terrier. Although the Morkie will inherit characteristics from both parent breeds, not all Morkies will get the same traits — not even those within a single litter. Your Morkie will be a bundle of lovable contradictions: tiny in size but big in attitude; highly playful but very fragile; easily excited but quite intelligent. Members of this breed can do well with other pets if socialized early but, remember, one of their parent breeds was a ratting dog so they may have hunting instincts toward small critters. They make great family pets, are excellent watch dogs require a great amount of maintenance in grooming, exercise and attention.

Below are the details and specs for the Morkie dog breed.

The Morkie is not called a Toy Terrier for nothing: once mature, their basic weight is 4 to 12 pounds, and they stand about 6 to 10 inches tall. They love attention, and it should not be difficult to carry them in a handbag, backpack or even a large pocket.

Their big attitude may come as a surprise to those who mistake the Morkie's small size for meekness, but they are still very playful, friendly and loyal dogs. Children should be taught to be gentle with them, however, and strangers will prompt a bevy of barking.

Morkies are not meant to be left alone, ungroomed or untended. They need lots of attention, daily brushings and frequent walks and play time. They don't shed much, and their hair grows constantly so they will need several annual trips to the groomer as well.

The Morkie is a somewhat new hybrid; because of this, there is no real detailed history — although it is believed that the first Morkie was conceived in the 1990s in the United States. Fortunately, there is quite a bit of history regarding the Maltese and Yorkshire Terrier breeds.

The lineage of the Maltese goes back approximately 2,000 years. This toy dog has been depicted in the ancient art of Egypt, Greece and Rome; even Aristotle described the breed as "perfectly proportioned." Just as the many other treasures that passed through this miniature Mediterranean archipelago — along with the many conquerors that laid claim to and thereafter lost the island — the Maltese may have first been noted on Malta. In any case, what is known is the dog was highly coveted, and even before Christianity was born, the dog was an ornament without which no noble woman was fully dressed.

With the fall of Rome came the Dark Ages, but not for the Maltese; the dog thrived as a currency in the Far East even as the West fell into murder, disease and despair, and dog-breeding was all but lost. With the Renaissance, dog-breeding was again brought to the fore, and it was during this rebirth that the Maltese gained one of its nicknames from being used in lieu of water-bottles to ease body pain: "comforter dog." The Maltese was said to have been initially imported to the United States from England in the late 1800s but didn't gain nationwide popularity in the U.S. until the 1950s. The Maltese was officially recognized by the American Kennel Club (AKC) in 1888, and these days it is one of the most popular show dogs in the nation.

The Yorkshire Terrier, on the other hand, is not even two centuries old — but the breed has a rich history replete with detailed records since shortly after its inception. They were raised as ratters, but quickly became popular as lap dogs. Ultimately named for the north England region from which they came, Yorkshire Terriers were conceived in the 1850s when various Terriers were cross-bred among people seeking work in the area during the early Industrial Revolution. The Terriers were taken along by the workers for one basic reason: as ratters to control the vermin population in the mines, factories and mills where the men were employed. The remarkably small dog could literally be carried in their pockets and could easily chase down rodents in the small spaces where they hid. Despite its humble beginnings, the Yorkshire Terrier quickly became a favorite of English Victorian royalty. These days, it remains one of the most popular toy-sized dogs in many countries including the U.S., UK and Australia. It was recognized by the AKC in 1885.

The Morkie's coat colors tend to be white, brown, black or tan. 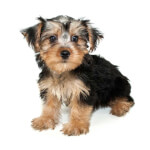 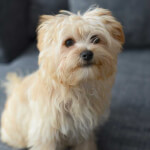 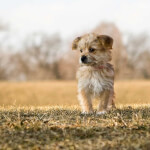 This toy terrier's typical size is 4 to 12 pounds when mature, and stands about 6 to 10 inches.

6-10 in
*Height is measured in inches from the front paws to the top of the shoulder while the dog is standing on all four legs.
4-12 lbs

A Morkie's coat is usually long and silky, and is a combination of its Maltese and Yorkie parents' coat traits. If the parent Yorkie has a wiry coat (generally considered a rarity), its Morkie offspring may reflect that, and the Morkie hair may be wiry as well. Also, many Yorkies are genetically predisposed to changing colors as they age--a trait which a Yorkie parent may pass on to its Morkie offspring.

And Morkie size doesn't normally vary too much; most full-grown Morkies weigh 4-12 pounds and are 6-10 inches in height.

Expect your Morkie to be playful, loyal and full of moxie! It can't be told it's a small dog, and the stubbornness will belie size. This dog will be very social and highly energetic, and must be trained and socialized very early. Training must be done with a very gentle hand and plenty of patience; yelling and similarly harsh methods will not work.

Although Morkies will get along well with children, they are very small dogs that are better suited to older children who can be made to easily understand his physical and mental fragility.

Your Morkie should be socialized very early with other pets, and they should get along just fine with them. It should be kept in mind that it was not so long ago that they were bred as ratters, however, and their hunting instincts may be triggered around very small, non-canine pets.

Your Morkie is sure to be a good watchdog as he will most likely be very alert to strangers and his environment; he will bark when unknown people, events and noises occur.

Below are pictures and images of the Morkie dog breed. 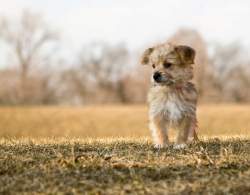 Morkies are high-maintenance dogs in most every way: grooming, exercise and attention. On the bright side, they don't have many health problems. While they get most of their exercise on their own, they still need walks, demand attention and require frequent grooming (preferably by professionals).

Get ready to groom! Your Morkie will require a great amount of maintenance as he will almost definitely have long hair, a lot of energy to be burned and a seemingly perpetual demand for attention. Eyes, ears and teeth should be frequently brushed, washed and monitored; two or three times weekly is strongly recommended. As they tend to not shed much and are relatively hypoallergenic, several annual trips to the groomer will be needed as well.

Morkies tend to get a fair amount of exercise on their own, but a couple of brief daily walks should be included as should at least a fair amount of play time with balls, bones and other toys. Left alone and with little or no exercise, Morkies are prone to acquiring destructive habits.

Morkies can easily adapt to being small apartment dogs or having the luxury of large yards in which to run and play. (Just be sure that if they are allowed outdoors, they are in a secure area that will protect them from predators as well as prevent them from chasing down rodents!)

There are no documented temperature restrictions for this breed. They are quite small and shouldn't be left in extreme weather conditions. They will most likely be indoor dogs, in which case they can be kept in any climate.

Some interesting facts about this mixed breed:

Morkies tend to have eye and ear problems due to their long hair, but they also have respiratory concerns because breeding for the desirable small, short and pinched snouts. Overall, they don't have many health problems, and of the small handful that may affect them, some of them can be prevented along with the daily and weekly grooming.

The following dog breed registries and organizations recognize the Morkie as a dog breed: