As the name implies, the Miniature Australian Shepherd, is a smaller but visually similar version of the Standard Australian Shepherd. The capability to work and willingness to please the owner has been retained in this smaller breed. Mini Aussies have a striking coat and eyes that can be marbled or even of different colors entirely.

This breed is apprehensive and reserved around strangers but makes a very close and loyal bond with their owner or family. This pet is not recommended for people that do not have time to truly make a pet part of their family, as they may suffer from separation anxiety. Miniature Australian Shepherds get along great with any other pets and make a wonderful playmate and watchful eye for children, as long as they are trained at an early age.

Twice yearly this breed sheds, but brushing a couple times per week should lessen this as well as prevent mats and tangles. Members of this breed have no serious health issues; various eye problems are to be monitored for. When searching for a pet of this breed it is always a good idea to check authoritative registries such as the Canine Eye Registry Foundation for breeders that have been cleared for correct adherence to standards.

Below are the details and facts for the Miniature Australian Shepherd dog breed.

This is a great choice for households with multiple pets of any type. Miniature Australian Shepherds make good family dogs. Their energy and playfulness will make them fun for kids but small children do need to be monitored in case the dog's abundant energy causes an accident. Strangers are met with reservation and apprehensiveness. Families without time to exercise and bond with their pet should not consider this breed as they are prone to separation anxiety.

Twice weekly brushing to prevent mats and tangles should do fine. Brushing may need to be performed slightly more frequently during shedding season and an owner of this breed should be prepared to vacuum during this time. Mini Aussies have moderate exercise requirements and, if not a working dog, should be given adequate outdoor playtime each day to avoid developing destructive traits due to boredom. Training should come easily due to the intelligence and obedience this dog offers. Members of this breed make very close and loyal bonds with their owners so positive reinforcement will work best for them.

The Miniature Australian Shepherd has origins in the United States during the 1960's, although the name sounds otherwise. Around 1978, Doris Cordova, a rancher from California began selectively reducing the size. Breeder's sought to decrease the size of the Australian Shepherd by mating smaller specimens together. Several other kennels followed suit and during the 1980's-1990's Miniature Australian Shepherd Clubs began forming in America. One of which, the Miniature American Shepherd Club of the USA founded in 1990, is considered the parent club of the breed by the AKC. The miniature size still retains the intelligence, working agility, and obedience of the standard size. They originally were key in herding sheep and goats and now they have extended their skills to horses. In 2011 the AKC Foundation Stock Service recognized this breed as the Miniature American Shepherd and in July of 2015 this breed was officially allowed to compete in herding dog competitions within the AKC.

This breed is proportionate in size over all parts of the body. Mini Aussies have a double coat of which the outer is medium length, straight to wavy and weather proof. The outer coat can be black, red, blue merle and red merle while the undercoat of this breed is typically lighter in coloration. Tan markings, from beige to rust, can be present on most parts of the body but this is not a requirement of breed standard; white markings may also be present but, once again, are not required. The head and neck of this breed is surrounded by a thicker mane of fur. The coat color corresponds with the color that can be found around the rims of the eyes and coloration of the eyes varies greatly; they are sometimes blue, amber, hazel, brown, combination of these, marbled and even one eye a different color than the other. The backs of the legs are typically feathered and the tail is naturally short, bobbed or docked. This breed moves with an agile and smooth gait. 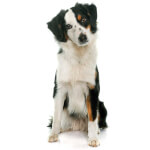 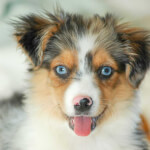 13-18 in
*Height is measured in inches from the front paws to the top of the shoulder while the dog is standing on all four legs.
30-40 lbs

Three different size variations of the Mini Australian Shepherd exist. The standard Mini Aussie is 13-18 inches at the shoulders in height, and normally weighs 30-40 pounds; the Toy Australian Shepherd, meanwhile, stands 10-14 inches and weighs 7-20 pounds. And a "subset" of sorts for Toy Aussies is the rare Teacup Aussie, which is less than 10 inches in height and 10 pounds or less in weight. Though separate breed standards exist for Toy and Mini Aussies, they are technically the same dog breed. The main difference between the two is that Mini Aussies are often used as herding dogs, while Toy (and by extension, Teacup) Aussies are simply too small for any type of work activity, and are generally used as companion pets.

Although short haired Mini Australian Shepherds are not unheard of, appearance-wise, these three variants are identical; all have medium-length double coats, proportionate body size, and various coat colors.

This breed is very good-natured and willing to please its owner, especially when completing tasks. Miniature Australian Shepherds form very close bonds with their owners and may suffer from separation anxiety if left alone for too long. They do best when in a family that truly wants their dog to be included in their daily activities. Their intelligence and devotion coupled with the previous traits make them easily trainable, however, these same traits make it imperative to go through obedience training at an early age. Miniature Australian Shepherds are hardly ever noisy and should only bark out of necessity of alerting its owners to something very important. Members of this breed thrive off completing tasks for their owner especially when they gain approval from them. Mini Aussies excel in anything that requires agility such as herding, flyball, and many other competitive events. In the working arena, this stamina and agility allows them to keep their livestock in order over long distances. Their small size and obedience allows them to be great travel companions and working dogs often accompany their owners to livestock shows.

Miniature Australian Shepherds make good family dogs. Their energy and playfulness will make them fun for kids but small children do need to be monitored in case the dog's abundant energy causes an accident. Socialization at a young age will help minimize this risk. These dogs are herding dogs and may show a natural inclination to herd people, especially small children. This activity is not harmful and can also be lessened with training at the appropriate age.

This well-mannered dog gets along well with other pets. Although they enjoy the company of their owner most, they are also working dogs that have always been in the presence of other animals.

Although this breed is social and good-natured, they will be reserved around strangers. They form a very loyal and close bond with their owner and will be watchful and alert around them.

Below are pictures and images of the Miniature Australian Shepherd. 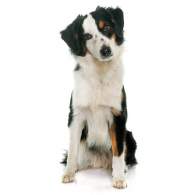 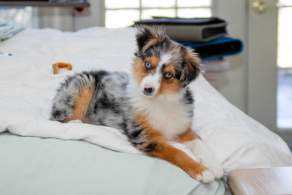 Despite this breed's striking looks, they need little in the way of grooming. Twice weekly brushing to prevent mats and tangles should do fine. Brushing may need to be performed slightly more frequently during shedding season and an owner of this breed should be prepared to vacuum during this time. Mini Aussies have moderate exercise requirements and, if not a working dog, should be given adequate outdoor playtime each day to avoid developing destructive traits due to boredom. Training should come easily due to the intelligence and obedience this dog offers. Members of this breed make very close and loyal bonds with their owners so positive reinforcement will work best for them.

The somewhat thick double coat of the Miniature Australian Shepherd will shed twice a year so be prepared to vacuum around these times. The coat is not very long so brushing a couple times per week will keep it free of mats and tangles and will also help with the shedding.

Miniature Aussies are working dogs and they will have relatively high amounts of energy that need to be spent every day. Their intelligence coupled with these exercise requirements makes them prone to boredom and this, in turn, can turn destructive. This breed loves toys and excels in activities that allow their agility to shine such as playing fetch or frisbee. Miniature Australian Shepherds will also never say no to taking a run or hike with you.

Members of this breed can do well inside the house and indoors owners say they are well-mannered and relaxed. In fact, they form such close bonds with their owner they may suffer from separation anxiety if left by themselves for too long. If kept indoors they will need plenty of playtime outdoors, however, due to their small size they will not need as much exercising as the standard size Australian Shepherd.

No temperature requirements have been documented in this breed. Information to date asserts this breed will do well indoors and outdoors. The originating country of the United States has a temperate seasonal climate, so they should be able to adapt to a wide variety of temperatures.

The most common health issues for Miniature Australian Shepherds are related to the eyes and some of which may be related to coat color genes. The most notable of these problems are: Progressive Retinal Atrophy, Juvenile Cataracts, Iris Coloboma (cleft in the iris that may impair vision), glaucoma, retinal dysplasia, and a membrane condition in which the membrane that exists as a puppy does not go away. There are several more eye issues not mentioned here but the key is to monitor your Mini Aussie's eyes frequently. In addition, it is suggested that owners test their dog for the MDR-1 gene before any treatment with anti-diarrhea, chemotherapy and antiparasitic drugs due to possible sensitivity to the medications. This gene is common in related breeds such as German Shepherds, Old English Sheepdogs, etc. Hip dysplasia is also not uncommon in this breed.

The following dog breed registries and organizations recognize the Miniature Australian Shepherd as a dog breed: