The Maremmano Abruzzese, usually shortened to "Maremma" (pronounced "mare-emma"), is an Italian pastoral breed whose lineage goes back around 2,000 years. They are solely guardian dogs with natural guarding instincts. This breed is known to be extremely loyal and affectionate, often overly expressive of his affection toward those he considers family, whether it be human or another pet. The Maremma is very dedicated and work oriented and is often described as calm and laid-back unless it is necessary for them to act. The best match for this breed is an owner that has a farm, ranch, pastures or huge property; they prefer being outside with a task and don't do well with frequent strangers unless socialized early. Maremmanos are easily trained by an experienced, firm owner but are also independent. Daily exercise is a must and they don't naturally require much grooming. This robust breed should live 11-13 healthy years.

The Pastore Maremmano Abruzzese (shortened to Maremma) originated in the Marammano and Abruzzo regions of central Italy; they were once considered two separate breeds, one from either region, but due to little differences the ENCI of Italy combined the two types into one breed as of 1958. Although their original duty was to guard flocks of sheep from wolves, their duties have since expanded to guarding all types of animals from livestock to penguins! They are also top notch guard dogs for person and property. As a natural guardian and protector, they will act if there is any sense of threat. If you do not have duties for this dog or are not an active person-- this breed may not be the best choice for you. Small living quarters or owners with frequent visitors are also not recommended. Consider the following Maremma dog quick facts:

Much of the reputable Maremma dog breed info you will find will stress to you that this breed is not primarily a "pet", this breed is a working dog, and keeping one as such requires a GREAT deal of socialization from the very beginning. They may be social and rambunctious as a puppy, however, they will steadily increase in their protective behaviors until they become quite the opposite. This dog is naturally intelligent and independent, requiring little training for their work. They are large to very large canines whose muscular, powerful bodies need plenty of exercise.

Maremmas are very easy to train when they are young. Although it is not recommended to keep them in house, they are easily house-trained and quickly pick up on basic commands. They need no training to do their duties because they are naturally protective and become more so as they age. By the time they are 2 they are independent thinkers that, although not outright disobedient, consider themselves your equal and like to make their own decisions. They will not leave their "post" if they feed their is a need to be there, even if instructed by their owner.

Members of this breed are outdoor dogs that need plenty of room to roam or, at the very least, a large yard. If you insist on keeping them as a pet they should be socialized from day 1, otherwise even the most common of strangers (the garbageman, even distant relatives at Christmas) may cause them to react negatively out of protective instinct. Although they do well with small children they are raised with, they should be supervised because of their size. As their duty was (and is) protection of flocks and livestock, they get along with almost any animaland have also been known to show them great affection; be careful if you have two male canines in the same living area, the Maremma is a leader and may not mesh well with another.

Maremmano dogs are meant to live outdoors in pastures, farmlands and on ranches with their charges that include everything from sheep to penguins! They are calm and laid back, once adults, but will need at least an hour of exercise daily if kept indoors (which is not recommended). If you insist on owning one of these in a city environment (also not recommended) they should be kept on leash at all times.

Maremma dogs are usually pure white, however, shades of ivory, lemon and even orange are acceptable as long as they are light (but not desirable). Black Maremma sheepdogs don't exist (or are extremely rare) as the color would be detrimental to their duties. The white coloration allows them to blend in with their flocks while guarding against predators such as wolves; in the even an altercation did occur, the shepherd needed to able to distinguish the grey wolf from the white dog-- therefore, dark Maremmas would not be acceptable. 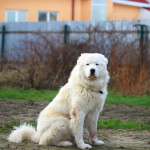 Both the UKC breed standard and the Meremma Club of American place this in the large dog category. In fact, they can be very large with the Maremma weight at 66-88 pounds for females and 77-100 pounds for males! They usually stand 23.5-26.5 inches at the shoulder (females) with males slightly taller at 25.5-28.75 inches. Keep in mind they are not suited for indoor living and not all all suited for small dwellings such as apartments, condos, etc. A large yard is the minimum of their space requirements.

25-29 in
*Height is measured in inches from the front paws to the top of the shoulder while the dog is standing on all four legs.
66-100 lbs

There is little variation for the Maremma as breeding goes back nearly 2000 years! They are primarily guardians of livestock (especially sheep) and, as such, this Pastore breed's hair is usually solid white. The coat consists of a dense undercoat with a fairly long, harsh and wavy outer coat. There are a few variations in color such as light ivory, lemon or orange, however, this is not desirable. Overall, the breed is very large, sturdy and muscular with a deep chest. They have a large, wide head (that is described to look like a polar bear) with a black nose, ochre or chestnut colored eyes and medium triangular ears that hang down.

There are some that suggest there are sub-types of this breed other than the Maremmano named for villages they come from, however, these differences in appearance are very slight and often disputed by biologists.

The Maremma Sheepdog's temperament is that of a dedicated, loyal working dog. They are also known be be affectionate toward anyone or anything they consider family. This dog can be independent but also loves to be around and all over the ones he loves. You can expect them to be caring for livestock they watch over and will consider it their life duty to guard and protect person, animals and property. They will quickly act in protection if they sense a threat. Members of this breed are said to increase in their protective instincts over time and, by the time they are a few years old, it may be hard to find many they are not suspicious of.

Since these are working dogs and desire a job, they are not recommended as pets by the Maremma Club of America unless socialized consistently from the beginning and, even then, they need outdoor living space. They are not tolerant of rough playing unfamiliar children and may not see it as playing and consider them dangerous. Although Maremmas don't normally attack, they may respond negatively to normal situations like unknown children playing rambunctiously, maintenance men working, garbage and mailmen... maybe any stranger. They do, however, get along well with other pets of any type; the only exception being another male alpha dog.

The Maremma Sheepdog personality has developed to make them independent thinkers that are focused on doing their jobs and they are not one of those "eager to please types". They will, however, loyally do most things that are asked of them and, if not, are not problematic or outright disobedient. Although many contend that training is pretty easy, it is essential you are able to direct this large dog with firmness and consistency. Even still, they tend to make up their own minds about whether a command is reasonable or not.

Maremmas are, perhaps, one of the most loyal breeds available and will protect you with all of the devotion they possess, however, this trait increases with age and they can become over protective. These large, high energy dogs will most likely be very affectionate toward his family; this includes adults, children, pets, livestock, and more. If they perceive strangers as threatening (even rough playing children) they may have a negative response. Maremma dogs and children should be raised together from the time yours is a puppy. Even as a puppy the size of the Maremma is great and they tend to be rambunctious and playful, so supervise is recommended with small children to avoid any unintentional accidents. This breed should make a wonderfully loving family companion as long as his independent streak and dedication to his job is respected.

Below are pictures and images of the Maremma Sheepdog. 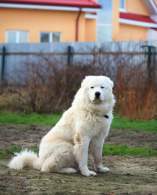 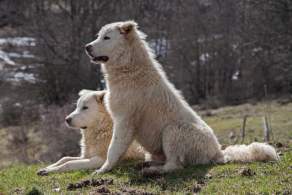 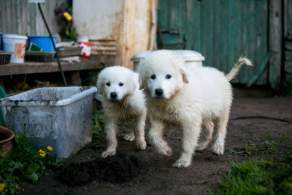 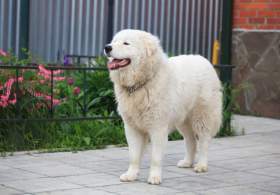 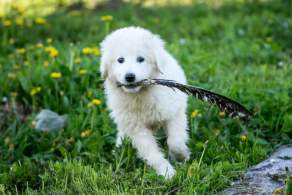 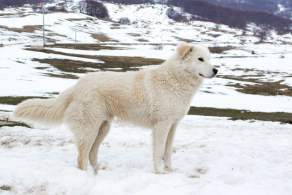 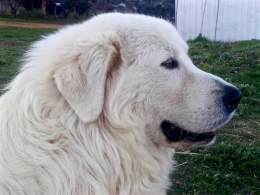 Maremmas are working dogs first, "pets" second. This breed stocks to his roots--they are purposeful working dogs for guarding livestock and property (and you). Unexperienced or first time dog owner should only consider this dog when he is a puppy, any later should only be considered by an experienced large dog owner. Both should remember that this breed needs and wants some sort of "work" to do. By the time they are a couple years old, their protective instincts will have been honed to the point that they may be over protective; strangers and roughness, confused as a threat, may provoke reaction from them (although they don't usually attack). They primary job is to guard and protect, and they will not let you down.

These are NOT city dogs for apartments or small homes and, ideally, they shouldn't live indoors at all. They need a large property to roam; at the very least, a large yard is necessary. The best scenario for this dog is a large farm or ranch where they can guard flocks of sheep, goats, cattle, horses, chickens and even penguins! Although calm and laid-back, they are still large working dogs with large exercise requirements.

Maremmas are pretty healthy dogs that typically live 11-13 years. They are prone to typical large dog issues such as Hip Dysplasia and Bloat; some may be prone to obesity so a healthy diet and not overfeeding them is essential. According to the Maremma Club of America, many are also sensitive to anesthesia and deworming agents.

If you are purchasing, rather than adopting your pet, do your research to find a reputable breeder than can offer proof of health such as: certifications and genetic testing reports of the parents (Hip, Eye, etc.) and health guarantees for the puppies.

The following dog breed registries and organizations recognize the Maremma Sheepdog as a dog breed: