The Japanese chin is a popular toy sized dog breed from Asia. Japanese chins likely have more cat like behaviors than any other dog breed as they can easily jump onto tall furniture and counters, desire being in tall places, bat objects with their paws, and even periodically bathe themselves.

Japanese chins do well in a variety of environments, but they are companion dogs and prefer being with their owner as often as possible. Their small size makes them an ideal pet for a small home, apartment, or condo. They are considered a happy dog breed, and get along well with just about everyone and other pets.

The Japanese Chin may be the perfect companion for those seeking an indoor lap dog. Members of this breed are very versatile-- old or young, apartment or palace-- the Chin will warm your feet and your heart. They are happy, charming and very aristocratic. Japanese Chins are suitable for apartments since they are considered quiet dogs and are cat-like in their cleanliness. A great family choice, they are loving and entertaining; the Chin Spin is one such behavior where they hop on their hind legs and spin around when eager or excited. The breed is friendly towards all- kids, strangers, and other pets. Consider the following Japanese Chin facts to help you decide if this might be the perfect breed for you:

As a toy dog breed a fully grown Japanese chin will be between 8-11 inches tall and weigh 4-9 pounds. This size makes them ideal travel companions and easy to maintain, however it comes at a cost since they can easily be injured when playing roughly with people and larger pets. Because of this it's recommended to supervise the breed when they are exposed to other animals and smaller children.

The Japanese chin is an intelligent happy dog. They have a charming behavior and enjoy all types of company around them. The breed's personality is known to match the lifestyle of their owner. Energetic Japanese chins normally come from energetic owners, while reserved Japanese chins often have owners that keep to themselves. As a companion dog the breed wants to be with their family all day and can suffer from separation anxiety if they are left alone for long periods of time.

The Japanese chin has a thick silky coat with feathering on the ears and the legs. They are a clean breed and don't require baths as frequently as other dogs with similar coats. The breed does shed, but brushing their coat weekly will help keep excess hair to a minimum. Japanese chins do well with children, but due to their small size they should not be left alone around smaller kids unsupervised (due to the high risk of the child unintentionally injuring the dog).

It is known that some were kept and bred at Buddhist monasteries as early as 528 A.D. Eventually, as many toy breeds do, they found their way into palaces of royalty and nobility and were taken out of reach of the peasants. The breed graced the lap of every aristocratic lady and, rather ironically, these elites worshiped and doted on these little dogs-- they even had their own servants.

The end of Japan's isolationism in the mid 1850's marked the introduction of the breed to the west. Three pairs were given to Commodore Perry as gifts, although only one pair survived. Nevertheless, the gates of Japan were open and the breed caught the eye of Queen Alexandra of Britain during the late 1800's. Popularity of the Chin skyrocketed in England and, therefore, throughout Europe.

In 1888, the first Chin, Jap, was recognized by the AKC as a Japanese Spaniel. The name remained until 1977 when it was renamed the Japanese Chin.

A Japanese Chin dog looks much how you'd expect a far Eastern breed. There is the large, round head with the most distinctive features being the large, round eyes that are set wide apart and the short, flat muzzle. The ears have long feathering as is the tail that is held high and curled over the back. The tail may be difficult to see since it is so profusely plumed that it seems to flow into the rest of the coat. As for the coat, it is long, silky and luxurious; the only part of the body where it is short will be the head, muzzle and fronts of legs. Acceptable colors include black and white, black and white with tan points, or red and white. The thick coat stands out more on the head, shoulders and hind quarters making it appear as if he/she has a mane and is "wearing pants". A Japanese Chin puppy's coat may not grown in completely until he/she is 2-5 years of age.

The AKC breed standard is highly specific when in comes to Japanese Chin colors. Black and White, red and white, and tricolor black and white with tan points are the only acceptable combinations. They further go on to specify that "red" can actually encompass many shades: "The term red shall include all shades of red, orange, and lemon, and sable, which includes any aforementioned shade intermingled or overlaid with black."  Technically, you could have a lemon and white Japanese Chin and it would still fall within the breed standards of red and white. There are no solid red, black or white Japanese Chins and any colors not mentioned previously would disqualify yours for purposes of competition. 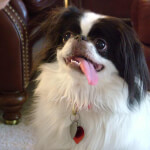 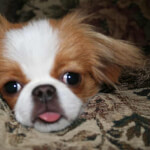 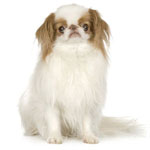 Japanese Chins are small sized dogs and considered part of the "toy" group within the AKC. If you have only a small space and are wondering how big your Japanese Chin will get, weight and height are as follows-- Fully grown adults usually weigh 7-11 pounds and reach 8-11 inches in height. The makes them perfectly suited to small apartments, car travel, etc.

8-11 in
*Height is measured in inches from the front paws to the top of the shoulder while the dog is standing on all four legs.
4-9 lbs

The Japanese Chin dog breed has few variations among individuals. Although they can be a variety of colors their overall appearance is the same. Therefore, if you see a Short-haired Japanese Chin they have likely been groomed to look that way; the coat is naturally long and luxurious.

The breed is naturally toy sized. Japanese Chins advertised "teacup" sized should be regarded with caution. First, this size is not considered standard to the breed so there is a chance the Chin you are considering is not a purebred. Also, some smaller dogs can be the result of breeding two tiny, unhealthy individuals-- this results in puppies with more health issues.

A Japanese Chin's temperament is truly charming. They were bred purely as companions for aristocracy and act as such. Compared to other toy breeds they bark very little but will alert you if the situation calls for it. The Japanese Chin's personality is also said to be very cat like; they will clean themselves and are alert, intelligent creatures. Although content to warm your lap, they are also lively outdoors-- as long as you're spending time with them. The Chin dog breed is good for families and is typically friendly with other pets and strangers. They are adaptable to many different living environments as long as they get plenty of attention every day. Japanese Chin characteristics of intelligence and nobility allow them to be easily trainable and make them excellent travel buddies.

Below are pictures of the Japanese Chin dog breed. 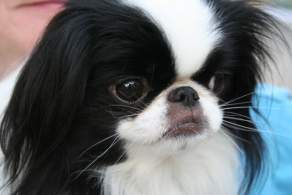 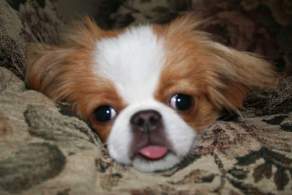 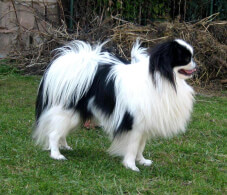 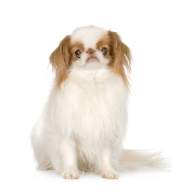 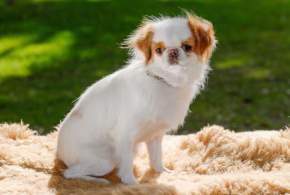 Japanese Chin are not hypoallergenic dogs. Their long, luxurious coats will need to be brushed about twice weekly to keep them free of mats and tangles. Other than that, the Chin breed is known for being cat-like in its grooming habits. They are very clean indoor companions and should be bathed on an as needed basis.

Members of this breed are very adaptable to new people and places. They make good apartment dogs due to the trait of being quieter than most toy breeds. Indoors they will be loving, devoted companions that desire to spend time with you daily. We recommend they don't live outdoors due to their love of human companionship.

Training should be fairly easy for this breed, even for a first time owner. The combination of alertness, intelligence and devotion renders them eager to please. However, if not given enough attention and exercise, this level of smarts can turn into nuisance behavior.

The Japanese Chin typically lives 10-12 years which is not quite as long as many toy breeds. Their short muzzles and prominent eyes make them susceptible to many environmental irritants like bacteria and dust. They are also prone to several hereditary issues. Below are health issues and concerns most common in Japanese Chins:

A few preventative measures can me taken to keep your Chin as healthy as possible. First, check the eye area for "boogers" or residue frequently and wipe with a wet cloth when necessary. Also, don't keep your Chin outdoors in hot weather for too long as this can cause respiratory distress. Finally don't skip your routine veterinary visits which can help detect heart, eye, joint and thyroid problems.

The following dog breed registries and organizations recognize the Japanese Chin as a dog breed: