The jack russell terrier is a highly energetic small dog breed that was originally bred to aid in fox hunting. The breed is known for their intelligence and ease of training, however jack russells think on their, look for loopholes out of your commands, and frequently get into mischief. Because of this they are not recommended for inexperienced dog owners.

Jack russells are devoted to their family and enjoy spending as much time with them as possible. Due to their small size and escape artist skills they are recommended as indoor dogs.

Below are the common traits and characteristics of the jack russell terrier dog breed.

The jack russell is a small dog breed that is usually 10-15 inches in height from ground to shoulders and weighs between 13-17 pounds. Don't let their small size food you, these dogs are full of energy since they were bred to keep up with the horses on fox hunts and have enough energy left to chase foxes.

The jack russell terrier can be described as a happy cheerful companion that wants to be with its family constantly. They are easily bored by repetition and will find other ways to entertain themselves which when combined with their never ending energy oftentimes gets them in trouble with their owners. Jack russells do well with older children, although their energy can overwhelm younger kids so they should be monitored when around younger children.

Jack russells are considered a low maintenance dog breed when it comes to grooming. Their coats stay relatively clean and rarely need baths although they will need to be brushed weekly to remove dead hair. The breed is known for jumping, so owners should keep their nails trimmed to prevent accidental scratches from an overexcited jack russell welcoming visitors.

Jack Russell Terrier history begins in England in the early nineteenth century, when the Reverend John (Jack) Russell, a student at Oxford University who was also a priest and a hunting enthusiast, sought to create a new type of Fox Terrier. At the time, the English White Terrier (a breed that is now extinct) was commonly used in fox hunts, and hunters apparently had difficulty in discerning between the dogs and the foxes they were chasing. So in 1819, Rev. Russell purchased a small, mostly white terrier from a local milkman. That dog was named Trump, and is considered the origin from which all other Jack Russell Terriers have developed. In the 2000 book The Jack Russell Terrier Handbook by D. Catherine Coile,Rev. Russell is quoted as saying that Trump was "...white, with just a patch of dark tan over each eye and ear; whilst a similar dot, not larger than a penny piece, marks the root of the tail."

Over the next several decades, Russell established a breeding program in order to develop a new terrier breed that would work with larger hounds on hunts; the smaller terriers, Rev. Russell thought, would be able to enter fox dens and drive the foxes out so the hounds could chase them. Russell used selective breeding to develop mostly white terriers that had both stamina and courage. By about 1860, the Jack Russell was considered a distinct breed.

A Jack Russell Terrier, though small-sized, has an appearance that characterizes its sturdy, compact power. This agile breed was created for its ability to enter underground fox dens, and its lithe physical makeup describes just such a dog.

The Jack Russell's slim yet muscular body is normally a bit greater in length than in height. The Jack Russell face is alert and well-balanced, with a wedge-shaped skull, almond-shaped, brown eyes, and medium-sized, triangular ears that normally face forward. The neck is fairly long, the chest is broad and pronounced. The Jack Russell legs are fairly long, limber, and are straight in front and angled back slightly in the rear; the paws are smallish and catlike, and parallel to the legs. Jack Russell tails are high-set, long, and curved slightly, and are often docked to half their length.

Jack Russell coats are often smooth, short, and double-layered, though broken and rough coats are possible. 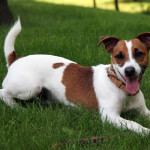 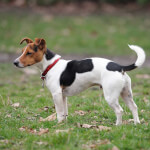 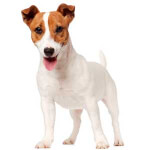 How big do Jack Russell Terriers get? This terrier is a small-sized breed. Jack Russell weight is 13-17 pounds; height at the shoulders is 10-15 inches.

10-15 in
*Height is measured in inches from the front paws to the top of the shoulder while the dog is standing on all four legs.
13-17 lbs

No matter the sub-breed, a Jack Russell Terrier has one of three coat types: smooth, broken, or rough. A smooth coat is softer to the touch, is normally short in length, and is absent of any excess hair on the face, head, or legs. A broken coat (some refer to as wire haired) is a little longer and has trace amounts of excess hair. A rough coat is harsher still, is normally medium in length, and has a fair amount of excess facial and leg hair.

A long-haired Jack Russell Terrier puppy, while genetically possible, is rare. Note, miniature, toy, and teacup Jack Russells are surely to be found but are not considered standard sizes of the breed; they may be hybrid crosses with even smaller breeds.

Intelligent, courageous, playful, loyal, and mischievous, the Jack Russell temperament is one of spirit and devotion. These dogs are extremely energetic, and they typically love digging and jumping (some as high as five feet!). JRTs are basically large dogs trapped in small bodies, and they are affectionate towards, and protective of, their human families. Canine experts suggest supervising a Jack Russell as often as possible, because if you turn your back for a second, a dog of this breed will have dug a deep hole or chased a squirrel across the entire neighborhood. The good news is that a Jack Russell Terrier's personality makes it eager to please, so it responds well to commands.

In regards to training, the Jack Russell displays traits and characteristics well-matched to learning. Their intelligence makes training these dogs fairly easy, though they may be stubborn and bored if the training becomes monotonous. Experts recommend mixing up the daily training routines, and using positive, reward-based training methods while doing so.

And though ts small size probably won't subdue any intruders, the Jack Russell's courageous personality makes the breed a terrific watchdog. A typical JRT will bark loudly and often if confronted with a potential threat.

Jack Russells are very good family dogs, and will treat humans with lots of love and affection. And while Jack Russells and children are a good match, these dogs are best suited for homes with older kids; they may be too rambunctious for small children, and they have a tendency to snap at someone who handles them roughly. Jack Russell Terriers should always be supervised around babies, as is the case with any breed.

JRTs can socialize well with other household animals, but will likely need to be trained to do do so. A Jack Russell's temperament with other dogs is normally good, but a few may be aggressive towards other canines, especially if they are of the same sex. Jack Russells and cats, meanwhile, normally have a fairly precarious relationship; since dogs of this breed have instinctively high prey drives, a JRT might chase and try to injure a cat. Experts recommend socializing these dogs with other pets as early--and often--as possible.

Below are pictures of the Jack Russell Terrier dog breed. 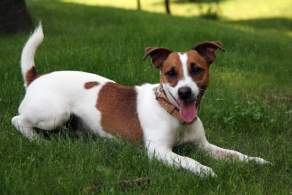 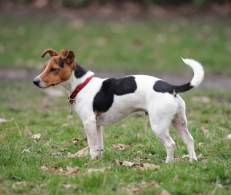 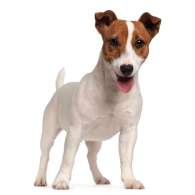 In all honesty, having Jack Russells as pets can be difficult for some people. They can be moody, hyperactive, quite vocal, and extremely rambunctious if bored. These dogs are probably not suited for first-time owners, and experts suggest enrolling a JRT in an obedience class as a puppy, regardless of its owners' experience with other dogs.

It's best if Jack Russell owners let their dogs live inside with them, but allow the JRT at least an hour of outdoor activity each day; it is highly recommended, though, that the dog be supervised as closely as possible, as dogs of this breed have extremely high roaming tendencies. As long as its exercise needs are met, a JRT will normally be fine in an apartment or a house.

It's been said that these dogs shed only once per year--for a 365-day period. Depending on whether your JRT has a smooth- or rough-haired coat, the dog will shed either often, or incredibly often. And Jack Russell Terriers are not hypoallergenic, so they won't be good dogs for allergy sufferers.

The following dog breed registries and organizations recognize the Jack Russell Terrier as a dog breed: