The Havanese was bred to be a companion dog in Cuba during the 1800s. The breed is extremely affectionate towards its family, other dogs, and even cats. Unlike other small dog breeds, the havanese generally doesn't develop jealousy or become territorial towards other pets.

Below are the details and specs for the Havanese dog breed.

The havanese is a small sized dog breed. Adults stand 8 to 11 inches tall from ground to shoulder and weigh between 7 to 13 pounds. This size makes the havanese an ideal dog for families living in space-limited homes such as apartments and condos. Keep in mind that the havanese is not an outdoor dog as their small size makes them a potential target from predators.

Since the havanese was originally bred to be a companion dog, they crave companionship. Havanese left alone become anxious and develop separation anxiety so the breed is not recommended for families that spend large amounts of time away from home (unless they bring their dog(s) with them). The breed is excellent with children, although the havanese's small size makes them more fragile than larger dogs so children can't be too rough. Havanese get along well with other pets and another pet can help give the havanese companionship while its owners are gone.

Despite the breed's small size, havanese are a medium to high maintenance dog. Their coat requires daily brushing and grooming to keep mats from forming along with regular clipping. Havanese are also fairly energetic. The breed will need daily walks to meet their exercise requirements.

Where are Havanese dogs from? Havanese history begins--where else?--in Cuba. In the early 16th century, Spanish settlers began populating the island, and they brought toy-sized dogs with them; these companion dogs, historians believe, are the true origin of Havanese dogs (and all Bichon breeds, for that matter). The settlers interbred and refined the toy dogs, and began the development of the breed as it's known today.

By the 1800s, the Havanese had become popular among the Cuban aristocracy, and eventually began being exported to England, France, Spain, and other European countries; the demand for the breed in Europe was huge by the 1850s, and owners of Havanese included prominent figures like Queen Victoria and Charles Dickens.

In the U.S., Havanese origin began with the breed's near-extinction. By the mid-20th century, only a handful of the dogs remained in Cuba; during the Cuban Revolution of the 1950s, some wealthy Cuban citizens fled to the United States, bring their dogs (including a few Havanese) with them. American breeders fell in love with the breed, and by the 1970s the Havanese was again thriving in the U.S. and elsewhere. The American Kennel Club added the Havanese to its registry in 1996.

Today the Havanese is beloved around the globe. The Havanese ranks 24th on the AKC's list of 195 recognized breeds.

Friendly, active, smart, and sometimes needy, the Havanese temperament is one of balance and companionship. Havanese dogs' temperament makes them friendly to most everyone they meet--but they need constant attention. One of the Havanese dogs' characteristics is that they're "Velcro dogs"--they rarely leave their owners' sides, in other words. Even so, the Havanese dog personality is an affectionate one, and these dogs get along with family, friends, and strangers alike.

Another of the great Havanese traits is that they're pretty intelligent and willing to please, and will usually respond well to training. With positive, reward-based training methods, these dogs should quickly learn most tasks, tricks, and commands.

Havanese personality traits don't include good watchdog abilities, though. Havanese behavior makes these dogs curious--but they're not really frequent barkers, so they might not sound a vocal alarm for unknown sights and sounds. And of course, they're simply too small (and too friendly!) to neutralize any potential threats.

Are Havanese good family dogs? They're terrific ones, as a matter of fact. Are Havanese good with kids? They're great! A Havanese and kids will make fantastic playmates. As with any breed, it's best if the dog is a "family-raised" Havanese that grows up alongside its human siblings.

It's important to note that Havanese and children age 5 and younger will need constant supervision. Because of the breed's small size, younger kids can unintentionally injure these dogs if play gets too rough.

Overall, These dogs get along fine with other household pets. The Havanese temperament with other dogs shouldn't be a problem--especially if all the dogs are raised together.

And are Havanese good with cats? Havanese and cats normally socialize very well. To a Havanese, a cat is just another playmate!

Below are pictures of the Havanese dog breed. 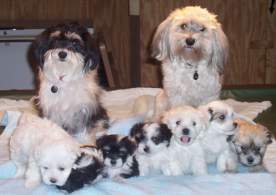 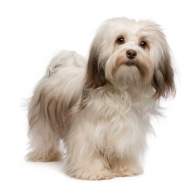 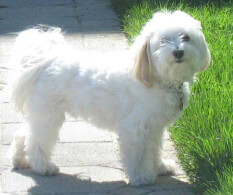 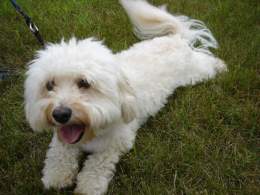 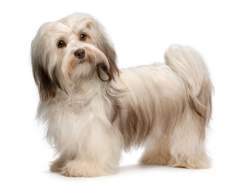 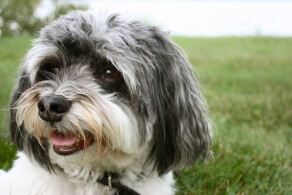 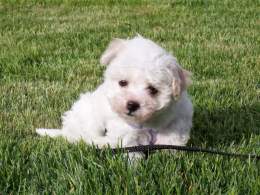 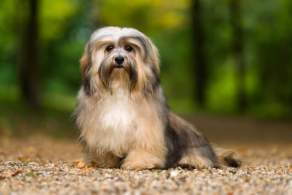 Owning a Havanese is for the most part a beautiful experience--but as with any breed, Havanese as pets require certain considerations. Above all, these dogs need a lot of attention, and will become quite anxious and even destructive if left alone for any length of time.

In regards to living space: Havanese and apartments are a perfect match--and of course, the dog will be fine in a house too. Whatever the case, your Havanese will definitely need to live inside with its human family members.

And are Havanese dogs hypoallergenic? Yes it is. Like other Bichon breeds, this dog's coat doesn't shed much--so Havanese hypoallergenic tendencies are very high.

Below are common health issues with the havanese dog breed.

The following dog breed registries and organizations recognize the Havanese as a dog breed:

All breeders with 'Quality Breeder' recognition have met our Quality Breeder Requirements.
* Please note - we are not endorsed or affiliated with any of the breeders listed above. However, we do our best to only list reputable and established breeders.
Havanese
Breed Description
Breed History
Breed Temperament
Breed Pictures
Breed Health
Havanese Care
Explore
Dog Breeds
Dog Colors
Dog Names