The Griffon Bleu De Gascogne is a small to medium sized breed that originated in France. It descends from crosses of the Bleu de Gascogne, the Griffon Nervais, and the Grand Griffon Vend. It is a member of the hound family and was bred as a hunting dog. It has a reputation for being affectionate, energetic, independent, lively, and loyal. Griffon Bleu dogs will be most in their element if engaged in hunting or tracking, though their affable pack mentality should make them suitable for families if they have been properly trained and socialized.

Below are the details and specs of the Griffon Bleu De Gascogne dog breed.

An adult Griffon Bleu de Gascogne will reach a height of 19 - 22 inches and will weigh in at 35 - 60 pounds. Griffon Bleu de Gascognes have been bred as hunting dogs for generations, and have not historically been family dogs. With that said, they should do well with children and other dogs but caution should be exercised in households with other non-canine pets.

Due to their work dog heritage this breed requires a minimum of one long daily walk and should ideally have ample space to run around in. These dogs are average shedders but their short hair should only require brushing a few times a week.

The Griffon Bleu de Gascogne is a breed of very ancient origin, descending from crosses between the Bleu de Gascogne and the Griffon Nervais, and possibly the Grand Griffon Vendeen; according to some, these breeds have been used as hunting dogs predating the Roman Empire. After having nearly become extinct, this breed is experiencing a considerable revival, and is being exported from France for those seeking a rare and unique pet.

The Griffon Bleu de Gascogne is a hound-type dog of small to medium size. They feature a solidly built frame, a domed skull and a prominent forehead. The eyes are oval in shape, dark brown in color, and framed at the top by bushy eyebrows. The ears are set just below eye level and are supple and lightly curled and slightly pointed. The coat is rough and shaggy and of a shorter length on the head and ears. The Griffon Bleu's tail is hairy and carried upright in saber fashion.

These dogs typically have mottled black and white fur, often featuring black patches. There is sometimes a white mask on the face and markings on the head, legs and under the tail.

Below are common colors of the griffon bleu de gascogne. 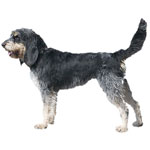 19-22 in
*Height is measured in inches from the front paws to the top of the shoulder while the dog is standing on all four legs.
35-60 lbs

This breed rarely displays shy or aggressive behavior-Griffon Bleus just want to be invited to the party. Historically, this breed has very rarely been kept as a family pet, so it does not have much of a reputation with children. However, similar breeds are known to be very good with children and due to their pack mentality the Griffon Bleu de Gascogne is likely to make a loyal and social family companion.

The Griffon has been used as a work dog throughout most of its history, but all evidence indicates that they should be fine around kids as long as they are properly socialized (ideally as puppies).

The Griffon Bleu de Gascogne is somewhat laid back when it comes to strangers. It does have an excellent sense of smell and will sense a stranger far away - however, it might attempt to make friends before taking any protective action.

Below are pictures of the Griffon Bleu De Gascogne dog breed. 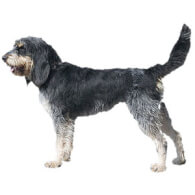 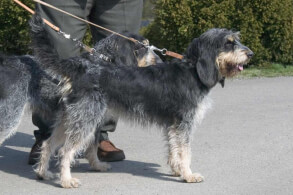 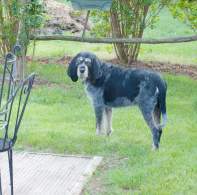 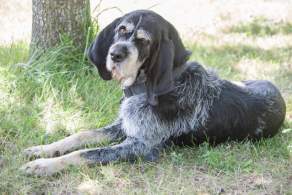 This breed requires medium maintenance. Due to their abundant energy, Griffon Bleus must be exercised daily if they are not being used as a work dog. A long daily walk and a yard to run around in should do the trick. Due to this, it is not recommended that they be kept in an apartment setting. These dogs are average shedders and will require regular brushing.

The Bleu de Gascogne has a short coat which should only require brushing a few times a week. However, this breed tends be an average shedder, so some hair cleanup will be necessary. Their ears are susceptible to infection and should be cleaned regularly.

These dogs are very energetic and need a good deal of exercise each day. If they are not being used as hunting or work dogs, Griffon Bleus should be taken on long walks and be given enough room to run around and play.

Griffon Bleus were bred to roam the country-side in search of game, and may feel cramped if left in an apartment. If the Griffon Bleu's living situation is in a place without at least a large yard should roam, it is imperative that its owner take it out for extensive exercise each day.

Griffon Bleus do well in most climates, though it is of course important that these dogs have shade and ample water available in extreme heat, and shelter in extreme cold.

The Griffon Bleu de Gascogne is known for being a very healthy breed and is not prone to any major health problems, though it is still important to regularly check for signs of ear infection or hip dysplasia. Its life expectancy is between 10 and 12 years.

Below are health issues to watch out for in the griffon bleu de gascogne dog breed.