Below are likely characteristics and traits of the Golden Cocker Retriever breed.

Due to the size differences between the cocker spaniel and the golden retriever, a fully grown Golden Cocker Retriever's weight can range between 30-60 pounds and the breed can be between 14-20 inches in height. The breed's size at adulthood is largely dependent on the size of the parents. Smaller than average parents can produce miniature, petite or toy Golden Cocker Retrievers, while larger parents will produce larger offspring.

The breed should have a loving, friendly, and sweet temperament as both parent breeds are known for their gentle nature. They make excellent family dogs and do well with children and other pets. Golden cocker retrievers love water and enjoy playing games such as fetch and frisbee. They make excellent running and jogging companions, and can even be trained to retrieve birds and waterfowl.

The breed forms a close bond with their family, so they are unlikely to wander off or run away if off the leash. They respond best to positivity and praise. Harsh commands should be avoided as it can negatively affect the breed's personality.

Golden cocker retrievers have long straight-haired coats, but should shed less than the golden retriever. The breed's coat can be a variety of colors, but cream and gold are most common.

Since hybrid dog breeds started gaining popularity in the 1980's, the breed doesn't necessarily have a history. Currently, the history of the golden cocker retriever is the breed originated in the United States.

The golden cocker retriever has a wide and broad head which resembles the shape of both parent breeds. The breed has long soft ears which are of medium length and fall to the cheeks. The eyes are deep and almond like in appearance.

The hair length is short on the head and is longer on the body and tail. The breed has a double coat which is silky to the touch and can range from smooth to wavy. The tail is long and commonly points upward with a slight twist. The breed has longer hair that grows between their toes which people say gives them the appearance of wearing slippers. 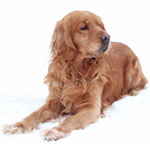 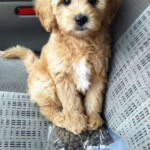 16-20 in
*Height is measured in inches from the front paws to the top of the shoulder while the dog is standing on all four legs.
30-60 lbs

Although there are apparently not many breeders who offer Golden Cocker Retrievers, producing this hybrid follows the same variations as any other hybrid: F1, F1B (or F1-B), F2, F2B, F3 and so on. Some breeders will choose to cross smaller individuals to create petite or toy puppies.

An F2 Golden Cocker Retriever is the result of two F1 Labradoodles being crossbred, and many of the same instabilities of the F1 tend to remain with F2s. To get to F3 and eventually F7 (which is the first stable multi-generational Golden Cocker Retriever that can be considered for recognition as a pure breed), however, F2s must be produced.

Golden cocker retrievers are considered friendly dogs and should be welcoming to friendly guests. They are considered an intelligent dog breed and have a strong desire to please their owners making them easy to train. It is recommended to use positive training methods as the breed is sensitive to negativity.

Golden cocker retrievers are considered to be a very people oriented dog breed. They commonly generate strong bonds with one or multiple family members.

The breed does well with both children and other pets. Golden cocker retrievers should be calm, but may become startled by unexpected loud noises.

The breed is considered a good companion for children. Their gentle nature and medium size makes them tolerant of a child's rambunctiousness and unlikely to unintentionally knock children down.

Even though golden cocker retrievers are a good breed with children, it is not recommended to leave a dog unsupervised with small kids.

Golden cocker retrievers do well with other pets and dogs. It is recommended to socialize the breed at a young age with other animals so the dog will be a better well-rounded adult.

The breed does well with friendly guests and strangers. This can make the golden cocker retriever a friendly companion in public, but also a poor watchdog.

Below are pictures of the Golden Cocker Retriever dog breed. 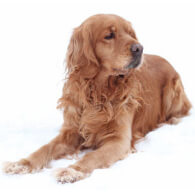 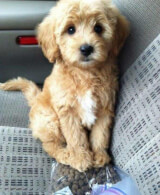 Golden cocker retrievers a medium maintenance dogs. This means the breed requires moderate effort from its owners to meet their exercise and physical care requirements.

The breed needs their coat to be brushed a few times each week to keep their coat tangle free and to remove loose hairs. The breed does shed, but shed less than the golden retriever. It is recommended to use a soft bristled brush and to be gentle when brushing to prevent unneeded pulling and tugging of hair.

Golden cocker retrievers can be bathed as needed or when their coat develops an odor. They can be clipped or trimmed twice per year to help avoid matting.

The breed is slightly energetic and will need daily walks to meet their exercise requirements. Golden cocker retrievers enjoy games such as fetch and chasing frisbees and make excelling walking, jogging, running companions. Lack of exercise can lead to hyperactivity which may cause destructive or other unwanted behavior to develop.

The breed makes an excellent indoor dog, as golden cocker spaniels prefer spending as much time with their owners as possible. The breed does well in small and medium sized yards, but homes with a large yard are unnecessary. They can live in apartments and condos as long as they meet their exercise requirements.

Golden cocker retrievers are slightly more cold tolerant than cocker spaniels. The general rule of thumb with this breed is if you're cold with a light jacket/sweatshirt then your dog will be cold as well. The breed can cope with warmer temperatures, but avoid exercising the dog during hot times of the day in summer and make sure they always have shade and ample water to cool off.

As a hybrid dog, the golden cocker spaniel should be healthier than either of it's purebred parents. However, health issues common in both parent breeds can occur in the breed. These health issues include:

The following dog breed registries and organizations recognize the Golden Cocker Retriever as a dog breed: