The American Foxhound is a rare, medium-sized breed that originated in the Colonial period of the U.S. Dogs of this breed are exceptional hunters, and make fairly good pets. Foxhounds require moderate care (little grooming, a great deal of exercise, and a good bit of training), and are very healthy. Overall, these dogs are best suited as hunting companions, or as pets for active families with a lot of outdoor space (and ideally, other dogs in the household).

The American Foxhound is a member of the Hound group of breeds, and has excelled as a versatile hunting dog since the breed was first developed in the 1700s. These energetic dogs make terrific companions for most any outdoor activity, be it hunting, jogging, or playtime with kids; their gentle dispositions make them great family pets too--but keep in mind that they'll be happiest when other dogs (particularly other Foxhounds) are also present in the household.

Some American Foxhound facts: they're medium-sized (height at the shoulders averages 23 inches, and weight 60 pounds), with medium-length, stiff coats that come in a wide variety of solid and combined colors. Here are some advantages and drawbacks of owning this active breed:

Fleet of foot, strong in the nose, an extremely loud bark--those are just a few of the many qualities that make the Foxhound such a superior hunting dog. American Foxhound dogs 101: they're easygoing and Zen-like when they're just hanging around the house--and focused, energetic, and relentless when on a hunt. They may be good pets, but they are excellent field companions.

These dogs' hunting expertise is often determined by their lineage. Some, such as the Running Walker Foxhound (possibly named so because of John Walker, an early Foxhound breeder), are great at chasing a scent; others are better as "pack hounds," and accompany hunters on horseback in groups of 15-20 dogs. No matter how they're used, these Foxhounds' loud, braying bark can be heard from great distances. While the typical Foxhound will be okay in a "single-pet household," the dog will prefer the company of other dogs--ideally, six or eight other Foxhounds.

And as expected, Foxhounds are extremely active, and will need plenty of exercise to burn off their excess energy--preferably in a large, rural outdoor space.

American Foxhound history is both specific and, in a manner of speaking, presidential. The breed has its roots with an early American settler named Robert Brooke, who sailed from England in the mid-1600s; Brooke brought a pack of hunting dogs with him--and those dogs (believed to have been mostly English Foxhounds) are the original ancestors of all future American Foxhounds. Other settlers began crossing these dogs with other hound types in order to create a bigger, faster Foxhound capable of hunting foxes on the more varied American terrain.

During the next century, George Washington was largely responsible for establishing the American Foxhound as a specific breed. Washington kept packs of dogs at his Mount Vernon home, and through the years he crossbred these emerging Foxhounds--purported to be descendants of Brooke's original dogs--with several breeds including the French Foxhound, the Grand Bleu de Gascogne (similar to an American Bluetick Hound), and others; eventually the American Foxhound became known as a breed all its own.

In the ensuing decades, several different Foxhound bloodlines were established, and some became known for specific hunting purposes. Walker, Goodman, Calhoun, Trigg, and Penn-Marydel are all known American Foxound strains, and are used in hunting for treeing, tracking, and pack-hunting.

The overall appearance of an American Foxhound is reminiscent of an NBA basketball player: long-boned, slim but muscular, rangy, and extremely athletic.

The Foxhound's body is about equal in length and height. The head is slim and oval-shaped; the eyes are large, wide-set, and hazel or brown in color; the ears are long, hanging, and rounded at the tips. The Foxhound's chest is wide but rather shallow, the legs very long and straight, and the body is cylindrical, long, and streamlined. The tail resembles a sickle: long, curved slightly, and erect.

The Foxhound coat is of medium length--though it lies close to the body and can appear shorter. The hair is stiff to the touch (to protect the Foxhound from rough brush, briars, etc. in the field), and can be almost any color.

The American Foxhound breed seems to follow the popular adage that "no good hound is a bad color." These dogs come in a wide variety of colors, in both solid and multi-colored patterns. Black and Tan is a common combination (in fact, a "Black and Tan Virginia Foxhound" is a frequent description for these dogs), as are Tri-Color (Black, White, and Tan) and Brown (or Red) and White. Other possible Foxhound colors include Red, Blue, Tan or White. 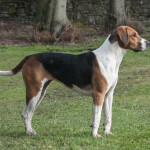 The American Foxhound is on the large side of medium-sized. Height at the shoulders for males is 22-25 inches; females are slightly smaller at 21-24 inches. Foxhound weight is 65-70 pounds for males, 60-65 pounds for females.

21-25 in
*Height is measured in inches from the front paws to the top of the shoulder while the dog is standing on all four legs.
60-70 lbs

The American Foxhound sees little variation in size, coat length, or physical features. The main variation within dogs of this breed is with their bloodlines. Throughout the breed's comparatively brief 250-year history, several noted strains have been developed by kennels and individual breeders:

Energetic, affectionate, easygoing, and at times stubborn, focused and strong-willed, the typical American Foxhound temperament is one of activity and love. Dogs of this breed, while not known for being super-intelligent, are usually loving and mild-mannered, great with kids and other pets, and very agreeable overall. That's when they're not hunting. In the field, Foxhounds become focused, stubborn, and totally single-minded--they've been developed for centuries to have one objective when hunting, and that is to follow prey.

As to training, American Foxhound characteristics can make teaching them tasks and commands difficult. Since they've been taught to hunt without much human interaction, they can be stubborn and unwilling to follow directions. If a Foxhound is to be a family pet, experts recommend obedience training (when the dog is still young, if possible) to ensure proper behavior. Overall, firm, patient, consistent training methods are best for these dogs.

A Foxhound will be a decent watchdog, too. Though they're not extremely alert (when not hunting, anyways), they'll often sound a vocal alarm if confronted with a potential threat--and their loud, braying bark will definitely be heard!

American Foxhounds' natural place is in the fields, often with a pack of other Foxhounds. That said, Foxhounds as pets can create some unwanted issues. Not only will these dogs need a great deal of exercise, but they bark often--and that bark is extremely loud! Foxhounds, therefore, are best suited for rural homes with plenty of outdoor space. Keeping a Foxhound in an apartment is a terrible idea, because the dog's barking will likely be heard throughout the entire complex.

Again, these dogs will need lots of roaming space--but it's best if that space is well-secured. As hunting dogs with high prey drives, Foxhounds will follow a scent (or an actual animal) for miles, so they may disappear for days on end if given the chance.

Indoors, Foxhounds shed only moderately, but they are not hypoallergenic, so they're not a good match for allergy sufferers.

American Foxhounds are exceptionally healthy, and suffer from very few genetic health issues. The only known inherited condition is a rare disorder called thrombocytopathy, a blood disorder that causes the dog to bleed excessively from even minor cuts or abrasions. In regards to general health, Foxhounds have a high tendency for obesity, and will quickly gain weight if under-exercised and/or over-fed.

Life expectancy for these dogs is 10-12 years.