Described by the AKC as "forever young", the Flat-Coated Retriever is a breed that will never fail to bring lively enthusiasm wherever it goes. These active and friendly dogs are great in a variety of roles, whether that be companion or hunting dog. They can be friends with just about anybody, though this means they probably shouldn’t be relied upon as guard dogs. Their gleaming and silky coat is fairly easy to groom but they do require an owner capable of providing the vigorous daily exercise they need to feel satiated and healthy. If you are looking for a friendly dog that can match your active lifestyle, this may be the breed for you.

Below are details and specs for the Flat-Coated Retriever.

These dogs are very spirited, warm, and sociable. They love being around people and will get along with most anyone they meet, including children and other dogs. They might bark at strangers approaching their territory but should not be relied upon to put up an aggressive defense.

This is a medium maintenance breed. These dogs are very energetic and will require a large amount of daily exercise in order to keep their health and behavior in check. The coat, however, is very easy to maintain and should require a minimal amount of brushing, plus occasional clipping and bathing.

The Flat-Coated Retriever was first bred in the mid-1800's in the United Kingdom. Hunters sought a hard-working bird dog, and fishermen needed an able swimming dog capable of retrieving their catch from the water. These needs led to the cross-breeding of Labrador Retrievers, Newfoundlands, and perhaps the now extinct St. John's water dog, in order to create an all-around sporting dog that excelled in swimming and retrieving.

The first Flat-Coated Retriever is said to have been shown around 1859, though the breed was not established as a stable type until some years after that. In 1915, the American Kennel Club opened registration to the breed. During these years, the popularity of the breed was growing rapidly, but by the 1920's the Labrador Retriever as well as the Golden Retriever had surpassed it in number. When World War II came to a close, the Flat-Coated Retriever was so rare that some thought the breed would go extinct. Fortunately, a man named Staley O'Neill, said to be one of the great authorities of the breed, went to task about reviving the breed, and in the 60's these dogs began to see a resurgence. Today the breed is once again prospering both in the United States and the United Kingdom, though it has not regained the popularity it saw during the pre-World War I years. Several of these dogs have won awards in the last two decades, including a 9.5 year old Flat-Coated Retriever named Vbos The Kentuckian (nicknamed Jet) who won Best in Show at Crufts in 2011.

This breed is known for its medium-long, flat-lying coat. The coat is silky and features feathering on the legs and tail. It is both elegant and functional; the coat protects the dog from cold water, ground fauna/debris, and inclement weather. The Flat-Coated Retriever has a rectangular shaped, athletic, lean frame that gives it strength and agility. Their tail is long and tends to swish back and forth with great vigor when the dog is excited. These dogs have a long, angular head with dark almond eyes that give it a thoughtful and warm expression. The ears are floppy and fall down to the side of the head. Their gait is confident and graceful.

The coat typically comes in either solid black or solid liver. 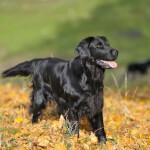 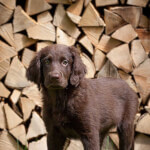 22-24½ in
*Height is measured in inches from the front paws to the top of the shoulder while the dog is standing on all four legs.
55-80 lbs

In addition to "humorous" and "energetic", this dog is often described as youthful or as the AKC says, "Forever young". These dogs mature somewhat slower than other retriever breeds and it shows in their playful, mischievous behavior. Some owners have said this makes them a bit trickier to train, as these dogs will only respond well to short intervals of training that rely mostly on positive reinforcement. Don’t let that dissuade you from this breed, though. Flat-Coated Retrievers are terribly friendly and love to be around people and even other dogs. They make for great family pets in addition to great workers, though if they aren’t being worked they will need a fair amount of exercise to keep their energy stores in check. They are very capable in a number of fields, from hunting to service work. They are great for active owners or families who want a dog that can accompany them on runs, hikes, swims - just about anywhere!

These dogs are definitely the loving type, and this includes children. Older children will find in them a tireless playmate and great friend, though care should be taken when these dogs are around small children as their energy and enthusiasm may present a knocking-over risk.

Flat-Coated Retrievers are known to get along very well with other dogs. Other pets, such as rabbits and cats, should be okay as long as they are socialized with the dog at a young age, as these dogs do come from a hunting lineage.

These unaggressive, friendly dogs will not pose much of a threat to unfamiliar people. They may bark to alert their owner someone is coming, but do not count on these dogs to put up much of a fight unless they recognize a serious threat.

Below are pictures and images of the Flat-Coated Retriever. 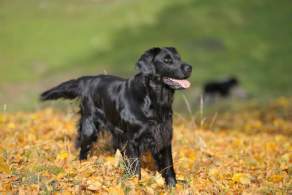 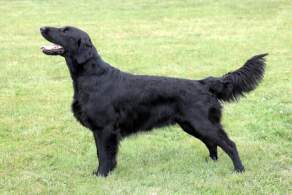 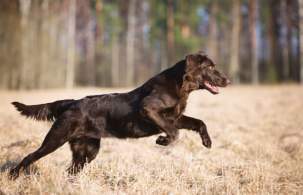 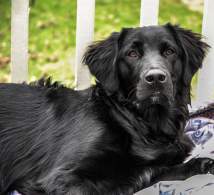 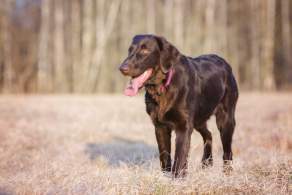 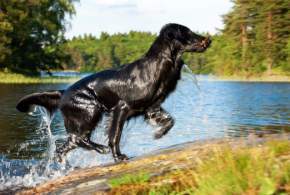 As far as grooming goes, this breed is a breeze. Brushing will only need to be done occasionally, as with bathing and trimming. Giving this dog the proper exercise it needs is more of a challenge; they have a lot of energy and need a release in order to be healthy and well-behaved. These dogs are moderate shedders, so be prepared from some hair around the house.

Although the Flat-Coated Retriever is fairly calm indoors, he's not suited to apartment life. He retains his hunting skills and should live in an environment where his talents can be used--or at least one that gives him the opportunity to run and swim. Expect to give him a couple of 45-minute walks, runs, or other activity daily to satisfy his exercise needs. If you're doing a good job, he'll look well conditioned and lean. Afterward, he'll enjoy relaxing with you in your home. He prefers to be with his people whenever possible.

Brushing should only need to be done once or twice a week, maybe a bit more during shedding season to minimize hair around the house. Nails should be trimmed about once a month or whenever they are heard clicking on the ground. Teeth should also be brushed at least twice a week to remove tartar and bacteria.

Flat-Coated Retrievers are a sporting breed and therefore have an abundance of energy that needs to be given its proper outlet. Take these dogs out for at least 90 minutes a day. They love to run, swim, and play just about any kind of dog game. It’s best to run on grass or dirt - prolonged exercise on cement can damage this dog’s joints.

Puppies should be given less exercise than adults; too much exercise will hurt their developing joints. About 5 minutes of exercise for every month the puppy is old should be okay.

These dogs are generally mild-mannered inside but still do not make for good apartment pets. They are happy when they have access to a yard or some kind of outdoor place where they can frolic and expend their vast stores of energy. A house with a large yard or a rural location would be ideal for this breed.

The eponymous coat gives these dogs ample protection against the cold, but they should still not be left outside during frigid weather, and especially not during periods of great heat. Let them stay inside with the family when they are not out working or having fun.

The following dog breed registries and organizations recognize the Flat-Coated Retriever as a dog breed: