The Dutch Shepherd is a working breed native to Eastern Europe. Closely resembling the German and Belgian Shepherds (both of which are genetically similar) in size and stature, this breed is an intelligent, working-class animal with an affectionate nature, factors that make it a remarkable family companion. Dutch Shepherds are also extremely trainable, and are regularly utilized by police units and search-and-rescue teams.

The Dutch Shepherd, a member of the Herding group of breeds, was developed in Europe in the eighteenth century to be a working farm dog. These animals are great, obviously, for livestock owners in need of a shepherd dog, but the make good companions for active families as well. A few Dutch Shepherd facts: they're medium-sized, have either long, short, or wiry coats, and are typically brindle in color. Here are some pros and cons of the breed:

Known as one of the most well-balanced of all dog breeds, the Dutch Shepherd is intelligent, athletic, affectionate, and protective, and will make an excellent family pet. These dogs have a strong work ethic and friendly personalities, and are often used by police K9 units and as service dogs for disabled people.

These are low-maintenance dogs, and will require little grooming or training.

The Dutch Shepherd originated in Eastern Europe, where it has existed for centuries. This breed is closely related to both the German Shepherd and the Belgian Shepherd; the Dutch and Belgian Shepherds are so genetically similar, in fact, that some argue that they are simply variants of the same breed. As Europe grew in population in the eighteenth and nineteenth centuries, these three shepherd breeds also diversified, and the Dutch Shepherd became especially popular in the Netherlands (which likely explains the origin for the breed's name) as a versatile working dog. Dutch culture of the 1800s was largely agricultural, so Dutch Shepherds were used to tend sheep, among other livestock; in particular, these dogs patrolled the borders of the crop fields, and prevented the sheep from eating them. Around 1900, the Nederlandse Herdershonden Clube, the official Dutch club for Dutch Shepherd owners, published the first breed standard for these dogs.

With the advent of more modern farming techniques, the need for this breed as a working farm dog decreased dramatically, so Dutch Shepherds shrank in number in the Netherlands and elsewhere during the early twentieth century; when Europe was ravaged by World War II, Dutch Shepherds nearly became extinct. But in the later 1900s, breed clubs worldwide revived its existence, though it is still somewhat rare even today.

This breed has three different coat types: short, long, and wiry. A Dutch Shepherd's athletic, well-toned body is normally a bit greater in length than in height. The head is wedge-shaped, with a somewhat flat skull and a medium-length muzzle; the eyes are wide-set, almond-shaped, and medium-sized; the triangular ears are medium-sized, somewhat forward-facing, and carried erect. This breed's chest is somewhat narrow, but fairly deep. The legs are of medium length, with straight forelegs and backward-angled hind legs; the tail is long, quite thick, and curves slightly.

Practically all Dutch Shepherds have brindle coats, with the brindle pattern including gray, gold, brown, silver, and blue. A few dogs may have non-brindled coats of blue and gray, or salt and pepper. 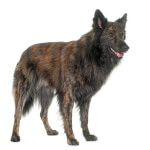 21-24 in
*Height is measured in inches from the front paws to the top of the shoulder while the dog is standing on all four legs.
50-70 lbs

Dutch Shepherds share many hereditary traits with the German and Belgian Shepherds--so much so that some people contend that the three are simply varieties of the same breed. Within the Dutch Shepherd breed itself, though, there is little variation in physical structure.

There is, however, some variety in coat types for dogs of this breed. Most of the coats are brindle in color, with one of three textures:

Intelligent, athletic, loyal, and intuitive, the Dutch Shepherd is an affectionate animal that is extremely easy to train – a combination of traits that makes it a fantastic family pet. An active and alert breed, these dogs, as is their farm-dog heritage, are enthusiastic workers; police forces, disabled people, and emergency organizations regularly employ Dutch Shepherds because of their versatility, outstanding work ethic and trainability. As a shepherd breeds, they are instinctively protective of people, other pets, and property, so they will make excellent watchdogs; this protective nature, though, can sometimes lead to dominant and bossy behavior, so a Dutch Shepherd will need consistent training, along with early socialization with people and other pets, to help it learn its proper place in the family "pack."

This breed makes a loving, loyal companion to kids of any age.

Dutch Shepherds interact extremely well with all other animals.

These dogs are instinctively suspicious of strange people, and will typically bark at them (though they don't normally show aggression).

Below are pictures and images of the Dutch Shepherd. 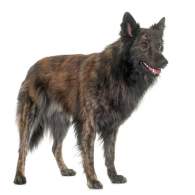 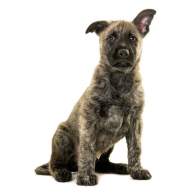 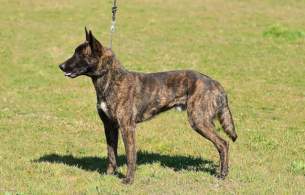 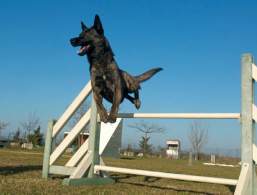 Dutch Shepherds are fairly low-maintenance animals. Little grooming will be necessary; not much training will be required (and will be extremely easy); a moderate amount of exercise will be needed.

Despite having three different coat types, all Dutch Shepherds require the same amount of grooming – and they don't require much. Brushing (or in the case of the wiry coat, combing) should be performed weekly to remove any dead hair; these dogs' coats are naturally water-resistant, so bathing should only occur when absolutely necessary, as baths remove the natural waterproofing oils from the coat.

These active, athletic dogs need a good deal of physical stimulation. Daily outdoor activities like Frisbee and fetch are great, as is an hour-long daily walk.

If provided with enough exercise, a Dutch Shepherd should adapt to any living situation, whether house or apartment.

These dogs will typically be comfortable in any climate.

Life expectancy is 12-15 years. This breed has no known major health issues; occasionally, these dogs suffer from minor hip or elbow dysplasia.

The following dog breed registries and organizations recognize the Dutch Shepherd as a dog breed: