The cocker spaniel is a popular small dog breed which is known for their cheerful attitude and beautiful coat. The breed is the smallest dog in the sporting group category, which makes them an easier dog to travel with and keep indoors than many other sporting breeds.

Cocker spaniels are intelligent, loving, trusting dogs. They have a strong desire to please and are excellent with children and other pets. The breed enjoys playing, but since they are a sporting breed they retain strong hunting instincts and will go after any bird, squirrel, or other small animal they see in the yard. In fact, the breed was named after their excellence at hunting the woodcock bird.

Below are the characteristics and traits of the cocker spaniel dog breed.

Fully grown the cocker spaniel stands 15 inches tall and weighs 24-28 pounds which makes them the smallest breed in the sporting category. Their smaller size makes them ideal for apartments and condos as well as a great companion dog for the elderly.

Cocker spaniels are known to have a loving sweet temperament. They love being involved with family activities and do well with children, other pets, and strangers. The breed is considered to be overbred so it's recommended to pay careful attention to the breeder's reputation as cocker spaniels coming from unprofessional breeders tend to have different temperaments as the breed's standard.

The cocker spaniel is well known for their beautiful coat. While the thick wavy coat looks fantastic, it can be a burden to groom. The breed requires daily brushing and coat maintenance as well as a thorough bath, clipping, and brushing every six weeks. Due to the heavy maintenance, many owners opt for a professional groomer, which can be costly. Cocker spaniels need daily exercise, but since they are a smaller breed they can meet their exercise requirements with a 30 minute walk.

True Cocker Spaniel origin, though well-documented, can be a bit murky. It is known that these dogs are part of the Spaniel family (with "spaniel" as the word for "Spanish dog"), and this breed's ancestors originated in--you guessed it--Spain. There, Spaniel dogs were divided into smaller companion dogs and larger hunting ones.

Around 1800, Spaniel dogs began being exported to England, and a smaller type became known as the "Cocking Spaniel" because of its ability to hunt woodcocks. "Cocking" eventually became "Cocker," and by the 1890s the Cocker Spaniel was recognized by Britain's official Kennel Club.

Today, various clubs define the American and English varieties differently: some say they're two varieties of the same breed, others don't. For the most part, though, the American variant is what people think of as simply the Cocker Spaniel.

So the questions "Where are Cocker Spaniels from?" or "Where do Cocker Spaniels originate from?" could be answered with Spain, England, or the U.S.--and oddly enough, all three answers are correct!

The Cocker Spaniel is the smallest Spaniel breed. Though only about 25 pounds in weight, these dogs are sporty and muscular--but compact too.

A Cocker Spaniel with a tail is the breed's natural look--but it's common to dock the tail of a Cocker Spaniel. (The docked tail is an old custom, done so to keep the dog's wagging tail quiet as it hunted in tall brush.) 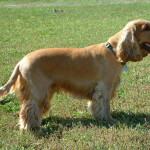 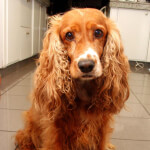 So on average, how big is a Cocker Spaniel? Average weight is 26 pounds, and height is 15 inches.

14-15 in
*Height is measured in inches from the front paws to the top of the shoulder while the dog is standing on all four legs.
24-28 lbs

Common belief is that there are two breeds of Cocker Spaniel: the American and the English. Both are simply referred to as "Cocker Spaniels" in their countries of origin, and different national clubs separate the breeds in different ways, if at all. There are slight differences in these Cocker Spaniel dog breeds' physical traits too: the English is slightly larger, while the American has a shorter muzzle and rounded head.

As to size, these dogs are pretty consistent: 14-15 inches in height, and 24-28 pounds in weight. These size ranges are simply averages, though: the smallest Cocker Spaniel could be only about 11 inches and 20 pounds, while a big Cocker Spaniel might weigh in at 35 pounds or more.

Beware, too: irresponsible breeders offer very small-breed Cocker Spaniel dogs for sale. A Teacup Cocker Spaniel (full grown, only about 7 inches and 10 pounds) might be advertised--but these "micro Cocker Spaniels" are usually the result of untrustworthy breeding practices, or even crossbred dogs.

Sweet, cuddly, sensitive, and playful, the Cocker Spaniel temperament is one of affection and delicacy. While normally energetic and fun-loving, the Cocker Spaniel personality is quite a "soft" one; suffice it to say that these dogs don't respond well at all to harsh treatment, and will turn defensive or "snappy" when they are hurt or afraid. Also among the characteristics of Cocker Spaniels is submissive urination (peeing when excited). As to overall Cocker Spaniel behavior, though, these dogs are very affectionate and happy.

Another aspect of the American Cocker Spaniel temperament: they're pretty intelligent and eager to please, so they'll usually respond well to positive, gentle, reward-based training. Cockers may need a few repetitions to learn tasks and commands, but normally learn things well.

And because of this "soft" Cocker Spaniel nature, they're not very good watchdogs. Cockers may bark at an unknown sight or sound, but are not good at all at confronting potential threats.

Are Cocker Spaniels good family dogs? You bet they are! A Cocker Spaniel with kids is a fantastic companion. What best makes a Cocker Spaniel as a family pet is when the dog is raised alongside the children. Regardless, though, because of the breed's sensitive nature a Cocker Spaniel and kids should be supervised at all times to keep the kids from playing too rough with the dog.

Overall, these dogs are great with other animals, as long as they're both trained and introduced properly. Like with kids, Cockers will socialize easier with other household pets if they grow up at the same time.

Are Cocker Spaniels good with cats? Usually, a Cocker Spaniel and a cat will get along fine--but be aware that the breed has a high prey drive, and may instinctively chase cats and other small pets (but won't harm them).

Below are pictures of the Cocker Spaniel dog breed. 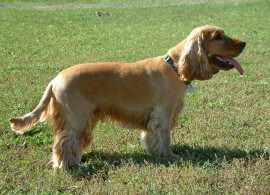 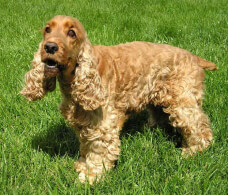 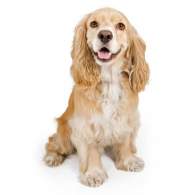 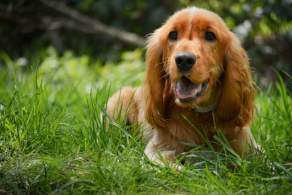 Having a Cocker Spaniel as a pet can be difficult--but owning a Cocker Spaniel, pros and cons notwithstanding, is usually a wonderful experience. Even so, these dogs have a few issues that can make living with a Cocker Spaniel a bit frustrating: they're extremely sensitive and need a lot of attention, and their high prey drives mean they might instinctively chase cats and other small pets.

Cocker Spaniel owners can live in most size dwellings (house or apartment), as long as the dog gets some daily outdoor exercise. Regardless of the Cocker Spaniel living situation, owners should be prepared for a bit of excessive barking, along with frequent submissive urination (or peeing when especially excited or nervous).

And are Cocker Spaniels hypoallergenic? In short, they're not. For the American Cocker Spaniel, hypoallergenic tendencies are near zero; while they don't shed profusely, these dogs leave enough hair and dander around the house that allergy sufferers will need to look for another breed.

Below are health issues and concerns most common in Cocker Spaniels

The following dog breed registries and organizations recognize the Cocker Spaniel as a dog breed: