The chow chow is well known for their bear-like appearance and blue tongue. Chow chows tend to be a love/hate dog breed due to their aloof attitude and territorial/protective instincts. They can be the perfect match for the right owner or a nightmare for others. Because of this, it is highly recommended to make sure the breed is the right choice for you and/or your family.

Originating in Northern Asia, the Chow Chow has teddy bear looks with a protective personality. In fact, they are best known for being dignified, reserved, aloof and even downright aggressive. This is a breed for a strong minded, strong willed owner, otherwise, the independent nature of the breed may make them quite unmanageable. For those that wonder "Are Chow Chows dangerous?" the answer is: they certainly can be. Chow Chow attacks are not are frequent as you may fear but the fact is they can be overly protective and aggressive if not socialized with people early and trained thoroughly! The breed is also notorious for seeming lazy so you don't have to have a large yard or be an athlete to own one. We do recommend, however, that families with small children consider another breed since they don't appreciate aggravation or rambunctious behavior-- plus may pose an accidental hazard if they decide to show aggression to strangers. Consider the following Chow Chow facts before choosing this breed:

Even though the chow chow is a large dog breed, they often look much larger than they really are due to the breeds fluffy heavy coat. Their size makes them a comfortable indoor dog without the risk of them knocking over chairs or tables like many other large dog breeds.

Chow chows are often described as having a cat-like attitude. They are independent, stubborn, and intelligent. They don't always like to be hugged or cuddled, so if you're wanting to adopt a chow because of their teddy-bear appearance, you will be in for a surprise. Despite the breed's reputation for being highly territorial, a well socialized chow should never be shy or aggressive. Even though the breed is wary of strangers, they do enjoy playing with their family. Chows do well with older children, but smaller children are generally too rambunctious curious for the chow's independent nature. The breed gets along with other pets and does best when introduced to other animals at a young age.

Chow chows are a moderate maintenance dog breed. Their coat needs to be brushed at least three times per week and the breed is a heavy seasonal shedder, so expect your chow's coat to require more maintenance during these periods. The chow only needs to be bathed once per month, unless their coat gets dirty and needs to be cleaned. The chow's exercise requirements can be met with 30 minutes of walk or play time each day.

Chow Chow origin in still up for debate with some estimating they go back 2,000 years as descendants of the Tibetan Mastiff and Samoyed, however, just as many others date the breed back at least 3,000 years as the ancestor to many Spitz type breeds from the Samoyed to the Pomeranian.

Another questionable part of Chow Chow history is the area from which he came. Although they are definitely northern in origin, there are theories suggesting areas of Arctic Asia, Siberia and Mongolia. Presently, they are found in the highest density in southern China-- so much so that they are considered an indigenous breed (one naturally inhabiting the area).

Guarding monasteries as well as families, hunting, herding and pulling are all jobs that have been on the resume during some point in time. They even accompanied Mongolian armies into Europe and the Middle East during the 1300s. The breed didn't make it to the UK and US until the late 1800's, however, special clubs and recognition followed quickly-- the Chow Chow has been AKC recognized since 1903!

This is definitely a breed that gives everything away by appearance. They are squarely built, stout and sturdy large-sized dogs. Well muscled and thick boned, they appear strong and dignified without the abundance of fur. A Chows legs are so straight that it gives them a characteristic walk that is referred to as "stilted" meaning stiff legged. The head is large, topped with tiny ears, with a broad, flat face and an equally broad, short muzzle. The eyes are almond shaped and almost seem to disappear within the fluffy face. Chow Chow's tongues are blueish-black (some say purple) which is fairly unique among breeds.

Members of this breed can have either of 2 coat types-- smooth or rough, which differ in length (smooth being shorter). They have an abundance of fur or "ruff" around the neck and the furry Chow Chow tail is carried over the back.

Members of this breed have 5 standard coat colors according to the AKC.

Black Chow Chows puppies are very sought after but red is probably the most common. Some cream puppies may appear white, however, white is not an acceptable color. Unfortunately, a recent interest has sparked in "panda Chow Chows"-- these are not black and white naturally but a result of owners dyeing parts of the cream coat black. This may not do any harm to them but this breed is known to have skin issues so harsh dyes may damage their skin.
The characteristic Chow Chow black and blue tongue is also a point of interest for many potential owners. 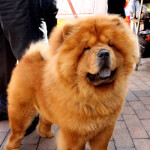 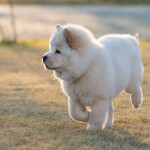 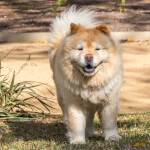 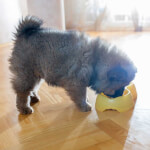 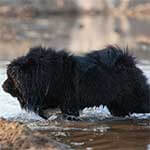 A fully grown Chow Chow's size is considered large. They will reach 17-20 inches in height when measured from the ground to the shoulders. The weight of your Chow Chow will vary depending upon the size of the parents and whether your puppy is male or female. You can expect males to weigh 55-70 pounds while females are slightly smaller at 45-60 pounds.

17-20 in
*Height is measured in inches from the front paws to the top of the shoulder while the dog is standing on all four legs.
40-75 lbs

Just like with the majority of other long standing purebred breeds, Chow Chows are bred in a few different sizes. Sometimes down sizing requires breeding unhealthy individuals or results in a greater likelihood of having health problems so it's of the utmost importance you choose a highly reputable breeder and not skip any vet appointments if you choose a more petite sized Chow.

Miniature Chows Chows are the most popular size other than the standard-"big Chow", however, they aren't exactly common. Teacup Chow Chows are even less common but still can be found due to people's love of tiny dogs. Those considering toy-sized pets such as these for appearance alone might consider a Pomeranian (which many liken to a Mini Chow).

Another variation that can be mentioned is in regards to the Chow Chows fluffy hair-- the coat can be either smooth or rough. Smooth coated Chow Chows may appear slightly smaller because the coat is a bit shorter (although, there's no such thing as a short haired Chow).

The Chow Chow temperament is most often described as reserved, aloof and even dignified. The owners, themselves, are likely to be the only ones privileged enough to see the Chow Chows true personality. They can be fiercely protective of the people they bond most closely with (usually 1-2 people). This can be an issue in the case of one that has not been properly trained and socialized; although many kennel clubs disqualify an overly aggressive Chow Chow, behavior can still turn dangerous.

This breed appears both dignified and wise-- and he definitely is! These dogs are very smart but, unfortunately, are notorious for being stubborn in regards to training and more than a little lazy. This is another reason why it takes a strong willed owner to match with a Chow.

Any dog can be relatively good with kids or, on the flip side, be very bad with them. While it's nearly entirely up to you how your dog ultimately behaves, there are nevertheless some breeds that are basically predisposed to having a somewhat short temper. Chow Chows are one such breed, and they often top the lists of dangerous dogs listed by apartment owners, canine Web sites, and entire nations. These dogs have long been bred to be fierce. Despite the pleas of many people who say they can be sweet, good intentions can quickly lose out against thousands of years of intended aggression.

That stated, the short answer is that Chow Chows are not recommended for kids or to live in homes where there are children in your family. This especially goes for households with babies, toddlers, or very young or small kids. It's not that the dog wants to hurt your child, but they don't understand that kids like to explore. Likewise, a child is most likely not going to understand that when a dog doesn't want to be touched or otherwise bothered, they give a series of ever-aggressive signals. Chow Chows tend to go through thiese steps very quickly and sometimes even skip a couple and go right to biting.

If you have a Chow Chow in a home or yard where other folks' kids like to play, this could be dangerous. Chows require a great amount of training, they need their owners to introduce strangers and even old friends, and they are notorious for putting their desires first. If a gaggle of neighborhood kids gets the idea to launch onto your property, this could be disastrous if there's an unsupervised Chow there too.

While Chows and children are not impossible to live together, it's probably for the best that only the most experienced Chow Chow owners allow kids to be around these dogs.

Surprisingly, the Chow Chow usually gets along pretty well with other pets. They are generally laid back around other dogs unless they feel you need to be protected. Chow Chows and cats can live peacefully together as this breed is not a hunting or sporting breed-- and they consider it wasting energy to chase critters! Introducing your puppy to dogs, cats and other pets from the earliest time possible will ensure the best possibility that your household pets will get along!

Below are pictures of the Chow Chow dog breed. 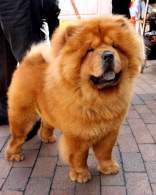 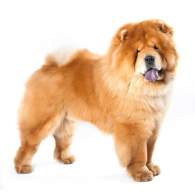 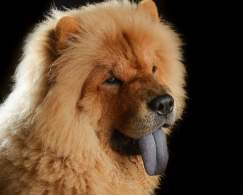 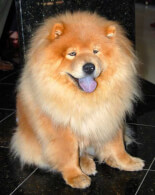 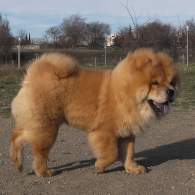 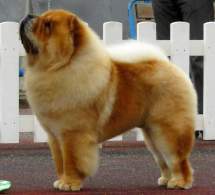 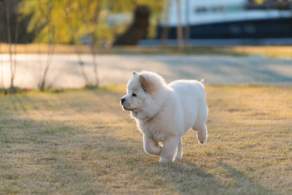 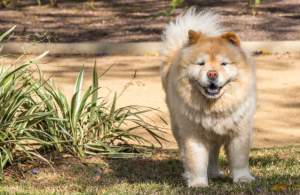 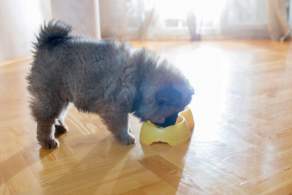 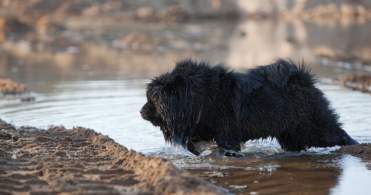 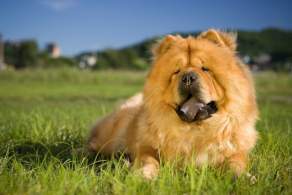 Owning a Chow Chow is can be both very rewarding and a huge liability. They probably shouldn't be the first choice for those with frequent visitors and strange faces around. Although they will be well behaved at home-- independent and aloof-- they are potential dangers if not trained and socialized very thoroughly from puppyhood. These dogs are great indoors due to their low-medium energy level, however, Chow Chow owners that plan to keep their pet outdoors should make sure the yard is securely fenced. Always keep this breed on leash when on walks-- even a well trained one can become over protective.

Chow Chows are not hypoallergenic. They have a lot of fur and there will be shedding. You can plan on putting a medium amount of effort into grooming. They usually behave well around other pets and are not excessive barkers. Loud, rambunctious households with small children are not a fit for this breed.

Chows have many potential health concerns, however, this doesn't mean they are going to have all (or even one) of them. Regular visits to your veterinarian can help detect and prevent some health issues. The following are associated with Chow Chows:

The following dog breed registries and organizations recognize the Chow Chow as a dog breed: