The Chiweenie is a small-sized hybrid dog produced from breeding a Chihuahua with a Dachshund. Like any hybrid, they will get traits from both parents but not in a predictable fashion: some will have a majority of Chihuahua characteristics, some will gain a predominance of Dachshund features, and there will be those that get a balance of both breeds' attributes. Be sure to study up on both Chihuahuas and Dachshunds if you wish to adopt a Chiweenie.

Although Chihuahuas and Dachshunds are small dogs, they don't have too much in common — but what they do share is friendliness, intelligence and energy; your Chiweenie is sure to be all this plus good with children (providing the kids are taught to be careful and the dog is socialized very early), a decent watchdog (they bark a moderate amount) and lots of fun! They make pretty good family pets and while they prefer large houses with lots of very secure yard space, they can adapt to apartments if they are given plenty of daily exercise.

Below are details and specs for the Chiweenie breed.

Once mature, Chiweenies are about 5 to 9 inches high and should weigh anywhere from 6 to 11 pounds.

Your Chiweenie will most likely be very friendly and good with kids, but they may be aloof around strangers and attempt to chase down small pets into areas that are essentially impossible for humans to reach, so be careful if you have pet hamsters, rats, etc.

Be prepared to set aside a fair amount of time every day to walk and otherwise exercise a Chiweenie; they will need it or they will get fat and perhaps very obnoxious too. Grooming usually requires a good deal less (unless they have long fur, which can happen with some pups) but they do have health concerns that demand frequent monitoring.

The Chiweenie is believed to have been first bred in the 1990s; there is very little history about them. There is, however, a great amount of history about their two parent breeds: the Chihuahua and the Dachshund.

The Chihuahua is a breed named after the region in Mexico from which it is said to have been first noted. Artifacts found in Mexico from the 9th century A.D. depict the Chihuahua from that time, and one of the oldest archaeological dig sites was in Cholula (not far from Mexico City) in which was found art from around or prior to 1500 A.D. that depicted a dog resembling a Chihuahua. A number of theories claim that the Chihuahua may have come from a much larger dog that was bred down for size, or that the Chinese Crested dog brought by the Spanish from China may have been interbred with a native dog, or that the breed is actually of European descent and came from Malta — this last theory being due to the relatively unique soft spot (called a "natural molera") on the back of the dog's head. Yet another theory is that a very small dog already existed in the North American region as far back as 3,000 B.C., according to a one Dr. William Web who dug up 21 small dog bodies from a two-acre grave site in Kentucky.

Chihuahuas had been introduced to the southwestern U.S. in the 18th century, but they weren't popular because they were too small to be useful on farms where the tasks of livestock-herding, cart-pulling and protection against predators was best undertaken by much larger dogs. Once the American urban/suburban-bound middle class exploded in the 1960s, however, the Chihuahua became popular because its small size allowed it to adapt easily to apartment living. It is one of the oldest registered breeds in the United States, as the American Kennel Club (AKC) was only 20 years old when it officially recognized the Chihuahua in 1904.

The Dachshund, on the other hand, was bred for a specific task: hunting badgers. With its distinct tubelike body, short yet powerful legs and remarkably sharp sense of smell, the dog was even named in German for what it did best; dachshund means "badger dog." Furthermore, the size of the dog (and the hole it could enter) determined how they were categorized within the breed. The standard Dachshund (Normalgrossteckel) is the largest of the three, whereas the miniature Dachshund is comprised of the other two categories: the dwarf Dachshunds (zwergteckel) were those that measured approximately 11.8 inches around the chest, and the rabbit Dachshunds (kaninchenteckel) were those with a chest that measured about 13.8 inches in circumference.

Although Dachshunds have not been around nearly as long as the Chihuahua, they too have been featured extensively in art through the ages. As far back as the 15th century (as well as the 16th and 17th centuries), they were regularly featured in illustrations depicting them at work as they burrowed into badger, rabbit and fox holes to flush out their prey and expose them to hunters. (There are also cave and tomb paintings from thousands of years ago that some claim depict the dog as well, but the Dachshund of today appears to have originated in Germany about 500 years ago.)

Dachshunds became very popular in the U.S. during the 18th and 19th centuries, and the first kennel club devoted to Dachshunds was founded in 1881. The first Dachshund to be registered with the AKC was four years later in 1885 (the year the club recognized the breed); his name was Dash. Just before the start of WWI, the Dachshund was one of the top 10 most popular breeds in the U.S. and UK, but due to the intimate association with Germany, that popularity declined precipitously until 1940 — just in time for the second such war and another period of derision due to the dog's unwitting heritage. It didn't take long after WWII for the Dachshund to again be popular. In 1972, the breed became the Summer Olympics' mascot (in Munich).

Your Chiweenie will almost certainly be small, but could also have a long or short torso. As for the expected features, they tend to have small heads, small feet and somewhat long tails. The snout many be long like that of a Dachshund or a bit shorter with a more dome-like head resembling a Chihuahua. The ears may be pointed like those on a Chihuahua or floppy like on a Dachshund. The fur could be short and wiry, long and silky or somewhere between, but in any case they are not at all hypoallergenic (it's fur and not hair), so be aware of your allergies if you wish to adopt a Chiweenie.

Your Chiweenie may be black, brown, tan, cream, red or white — or any combination of these colors. 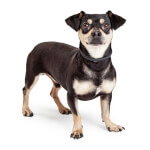 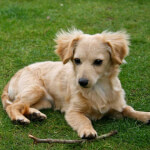 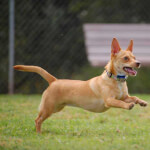 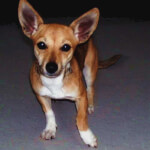 Chiweenies are small dogs, to be sure, and when mature they will weigh approximately 6 to 11 pounds and stand 5 to 9 inches high.

5-9 in
*Height is measured in inches from the front paws to the top of the shoulder while the dog is standing on all four legs.
6-11 lbs

Mixed breeds vary much more than their purebred parents in many different aspects such as size, coat, and even temperament. Even puppies from the same litter cannot be guaranteed to appear or act the same. Ask your breeder about the differences among each generation of Chiweenie, as the percentage of each parent breed changes per generation. F1 Chiweenies are the result of crossing a purebred Dachshund with a purebred Chihuahua. An F1B is when a breeder takes one F1 Chiweenie and crosses them back with either a purebred Chihuahua or purebred Dachshund. An F2 is the progeny of two F1 Chiweenies bred together... and so on.

There are both long and short haired Chihuahuas, plus Dachshunds come in 3 coat types: short, long, and wire-haired. This ensures plenty of coat possibilities depending upon what type of coat the parents had. For instance, if you want a long-haired Chiweenie, look for a reputable breeder than has both a long haired Chihuahua and long haired Dachshund.

These dogs will also have many size variations. Chihuahuas are bred down to Miniature and Toy sizes, and Dachshund also come in a miniature variety. Although they are not as common, it is possible to find breeder that offer Teacup or Mini Chiweenie dogs. Keep in mind that sometimes dogs that have been bred smaller for size often suffer health consequences that can be costly for the owner.

The Chiweenie is a very playful, highly energetic and easily trainable hybrid dog. They come from two breeds whose trainability ranges from average to typically easy, and so your Chiweenie should not be difficult in this respect either. They make great family pets, although young children should certainly be taught to be careful with such a small dog so as to prevent injury when playing with them.

The Chiweenie is a good dog for children — so long as your kids understand that small dogs may like to play but require consideration when doing so to prevent injuries to all involved, especially if your Chiweenie has inherited a Dachshund's long back as they are more prone to injury.

Chiweenies may not get along well with other pets, but with early and persistent socialization, there is a much better chance they will do so. With much smaller pets, their hunting instincts may be triggered, and if outside they may tunnel under fences to get at them.

When strangers approach, your Chiweenie will most likely react in one of two very different ways: barking to attract the stranger so that she may have a new friend to pet and play with her, or remaining aloof and shying away from being touched at all. They may be small dogs, but they have a big heart and due to their hunting lineage tend to not be afraid of people, even if they may not want to be touched or held by anyone other than "their" humans.

Below are pictures and images of the Chiweenie breed. 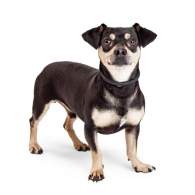 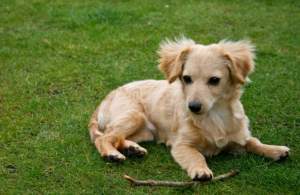 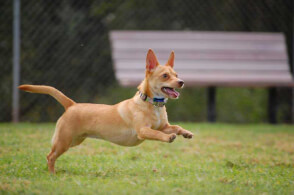 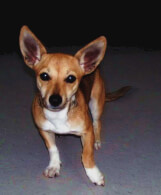 Your Chiweenie will most likely require average maintenance when all things are considered: grooming (low to moderate), exercise (high) and health (moderate). While a low to fair amount of brushing will suffice (especially if they inherit the short, coarse fur of the Chihuahua), they will definitely need a lot of exercise and attention.

Grooming your Chiweenie should be fairly easy; they are low- to medium-shedders, need just a couple or three brushings per month (or one weekly if they have long fur) and bathing only when they are dirty (which could be often enough if they have more Dachshund in them and are regularly allowed outdoors). If they have long fur around their ears, be sure to inspect them regularly. Always be sure to check the teeth as small dogs are more prone to dental problems.

The Chiweenie comes from two very active parent breeds, and he will be no different. Two medium-length daily walks, lots of play time and plenty of toys are essential to keeping your Chiweenie healthy and happy. If you have a large, very secure yard (as in a deep fence or impediments that will prevent her from burrowing under to escape), she will love you even more!

Although Chiweenies are small dogs that can easily adapt to apartment living, they are extremely energetic dogs that must have a lot of exercise lest obesity and destructive behavior dominate. If you have a large house and plenty of well-fenced yard space, they are better suited to those living arrangements.

Chiweenies have a low tolerance to cold and do much better in moderate climates. If they fold their ears forward, it is said, this is a sign of them being too cold as they are apparently attempting to keep their inner ears warm.

Chiweenies' most common health concerns are back problems as well as allergies. They can, however, also be prone to diabetes, seizures and dental issues.

The following dog breed registries and organizations recognize the Chiweenie as a dog breed: