The cavapoo is a hybrid dog and the offspring of a cavalier king charles spaniel and poodle. Ideally hybrid dogs inherit the desirable traits from both parent breeds, but it is nearly impossible to predict which characteristics the cavapoo will receive from its parents. Some cavapoos will receive more traits from the poodle while others may receive more traits from the cavalier king charles spaniel. Because of the potential variation between behavioral and physical traits, it is recommended that potential owners familiarize themselves with the traits and characteristics of both parent breeds.

Below are the details and traits of the cavapoo dog breed.

The cavapoo's size can range from small to medium, depending on the size of the poodle used for breeding (miniature poodles result in smaller cavapoos while standard poodles produce larger cavapoos). Cavapoos commonly have soft coats and are known for having long ears. Many people consider the cavapoo as one of the best breeds to resemble a teddy bear or stuffed animal.

The cavapoo is considered an excellent family dog. The breed is affectionate, friendly, and loyal to their family and are great for both children and the elderly as well as with other household pets. Like any dog breed, the cavapoo should be socialized at a young age to help keep the breed well-rounded as an adult.

Cavapoos are considered an extremely intelligent dog breed and may need some form of mental stimulation to keep them from getting bored and developing destructive habits for entertainment. Teaching your cavapoo tricks and commands is highly recommended as the breed is very easy to train and this mental stimulation can often keep unwanted behavior from occurring.

The cavapoo is one of the older crossbreeds which gives it a more detailed history than many other hybrid dog breeds. The cavapoo was first bred in America in the 1950s to produce a dog with a non-shedding hypoallergenic coat, lower health issues, and friendly companionship. In the 1980s the demand for hybrid dogs made the cavapoo a desirable dog breed which helped it to become sought after in the United Kingdom and Australia.

The overall appearance of the cavapoo can vary from one dog to the next due to the genetic influence of the parent breeds. Generally the cavapoo will have a compact face with a large brow and long ears.

The cavapoo coat is usually soft (similar to the poodle), but some cavapoos inherit the cavalier king charles spaniel coat which will be longer, more wavy, and silky to the touch. Cavapoos that inherit the poodles coat generally shed very little and are hypoallergenic.

The cavapoo can come in a wide variety of colors (due to the many color combinations between the poodle and cavalier king charles spaniel dog breeds). The most common colors include black, white, chestnut, and tri-color (black, tan, and white) other colors include apricot, cream, phantom, red sable, and sable. 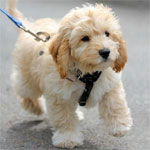 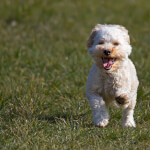 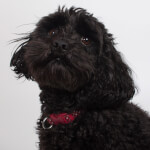 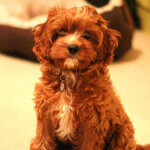 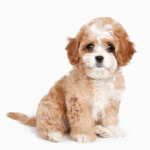 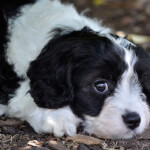 The cavapoo is a small to medium sized dog breed. The size of the cavapoo is largely dependent upon the size poodle used in breeding.

9-14 in
*Height is measured in inches from the front paws to the top of the shoulder while the dog is standing on all four legs.
7-26 lbs

Like most hybrid dogs, there are four basic variations of the Cavapoo generational (formally known as "filial") hybrid: F1, F1B, F2 and F3. (Few breeders produce beyond the F3, and while there are breeders who claim that anything beyond F3 is formally considered a breed, it tends to be F7 that nearly all kennels and clubs accept as the first generation whose "hybrid vigor" is bred out enough for a hybrid dog to be formally considered a breed.)

The F1 Cavapoo — also known as the Cavoodle — comes from cross-breeding a Cavalier King Charles Spaniel with either a Toy or Miniature Poodle. This first generation hybrid, when crossbred with another F1 Cavapoo, produces an F2 Cavapoo; when two F2s are crossed, you get an F3 — and so on.

The variation within the variation, the F1B (and F2B, etc.), comes from cross-breeding a an F1 Cavapoo (or F2) with either a Cavalier King Charles Spaniel or a Poodle. (Just as with producing an F1 Cavapoo, the Poodle used is almost always either a Toy or Miniature.) Breeders tend to do this to either control the coat style or dog size.

There are a variety of coat styles that can occur when crossbreeding for Cavapoos, and while such coats range from merely wavy to big curls and may be slightly coarse or very silky, there is one rare coat color that is nevertheless more and more popular: the ruby (or mahogany) coat color. Most Cavapoos tend to have a two-color combination coat of white, brown, black and gray or a basically lighter, golden-colored coat; getting a Cavapoo pup whose coat will become a dark red, ruby or mahogany is difficult.

As with most hybrids that include a Poodle in the mix, there are three size variations with the Cavapoo: Toy, Miniature and Standard. The Toy Cavapoo (aka Toy Cavoodle) is 12-14 pounds and stands 10" to no higher than 12" tall. The Miniature Cavapoo (aka Miniature Cavoodle as well as the Mini Cavapoo or Mini Cavoodle) is in the middle but generally is the largest at 15 to 17 pounds and standing from 13" to 14" in height. Since people and breeders seek to breed down in size, there are far fewer of the largest Cavapoos, which weigh 18 or more pounds and stand 15" or higher. It should also be noted that as there is no formal recognition by kennels and clubs such as American Kennel Club (AKC) and the UK-based United Kennel Club (UKC), a lot of people (and breeders) tend to generalize the term Mini Cavapoo puppies when talking about Toy and Miniature Cavapoos.

Cavapoos are friendly energetic dogs which crave human companionship and do best with families that are home frequently or don't mind their Cavapoo tagging along while running errands or outside the home. This intelligent breed has a laid back attitude and is friendly with strangers, children, and other pets. The breed can suffer from separation anxiety if left alone, so that should be taken into consideration if deciding to adopt a cavapoo.

While the breed is energetic, their energy levels often adapt to their owner's lifestyle. Regardless, cavapoos are always up for a game of fetch or a brief walk around the block.

Cavapoos are friendly with children. However, as with all breeds, the cavapoo should not be left alone with young children or kids inexperienced with dogs unsupervised.

Cavapoos see everyone as their friend and should not show any signs of aggression towards welcomed strangers or guests. This can make the cavapoo a poor choice as a guard dog or watch dog.

Below are pictures of the Cavapoo dog breed. 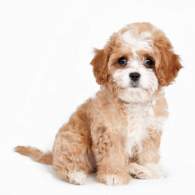 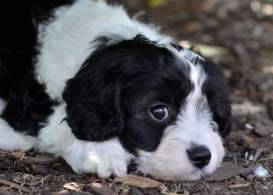 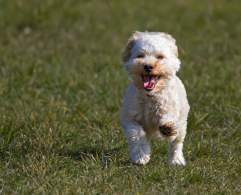 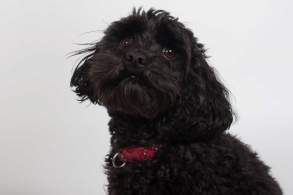 The cavapoo is a medium maintenance dog breed. They require frequent grooming to keep their coat in top shape and need little exercise to meet their energy needs.

The cavapoo's coat needs frequent care to keep it clean and tangle free. The coat needs to be brushed daily and will need to be clipped a few times per year. The breed's toenails can sometimes get tangled in the fur at their feet so owners should inspect this area to make sure there are no snags.

The cavapoo's energy level will often adapt to their owner's lifestyle. The breed loves exercise, but will often be satisfied with a good walk or rigorous play time. The amount of exercise needed can sometimes differ between larger and smaller cavapoos as small cavapoos will often need less exercise than larger cavapoos.

The breed does best indoors, as they constantly want to be with their family. They do well as apartment dogs and can do well living in homes without yards. Even though the breed is energetic, their small size makes them easy to exercise so cavapoos don't need access to a yard to burn off energy (although it can help).

The cavapoo can tolerate cooler temperatures than people, but risk overheating in hotter climates as their coat can make them warmer than Poodles and Cavalier King Charles Spaniels.

As a hybrid dog, the cavapoo should be healthier than both of its purebred parents (due to more gene diversity). It is still important to only choose cavapoos from breeders which have health screened both parents.

The following dog breed registries and organizations recognize the Cavapoo as a dog breed:

All breeders with 'Quality Breeder' recognition have met our Quality Breeder Requirements.
* Please note - we are not endorsed or affiliated with any of the breeders listed above. However, we do our best to only list reputable and established breeders.
Cavapoo
Breed Description
Breed History
Breed Appearance
Breed Colors
Breed Size
Breed Temperament
Breed Pictures
Breed Exercise & Grooming
Breed Health
Cavapoo Grooming
Cavapoo Care
Where to Get A Cavapoo
Explore
Dog Breeds
Dog Colors
Dog Names