The Cavachon is a small- to medium-sized dog bred from crossing a Cavalier King Charles Spaniel with a Bichon Frise and will inherit traits from both parent breeds. Friendly, funny and attention seeking, members of this breed get along well with everyone; kids, other pets, even strangers will be greeted by them. Besides clipping every few months and a daily walk, this breed is quite low maintenance. Ideally, they will be in a household where the owner has an abundance of attention to give and doesn't spend all day away from the house. Cavachons are well sized to your small home or apartment but will still appreciate a fenced yard. Members of this breed should, in general, be healthier than their purebred parents and may live up to 15 years!

Below are details and specs for the Cavachon dog breed.

Cavachons are small dogs that can be between 12 and 16 inches in height and 12 to 18 pounds when mature.

Your Cavachon is sure to be friendly with most everyone, even if they do bark when strangers approach. They are always happy, even around other pets. Although they love children, they should be socialized with them early on as well as making sure the children know to be gentle when playing.

While Cavachons are low-maintenance dogs regarding grooming, brushing and exercise, they are high-maintenance when it comes to attention. Left alone for too long, they can develop a separation anxiety, so if you are looking for a dog to be there after long trips, a Cavachon is not for you.

It is believed that the Cavachon was conceived in 1996 when an accidental litter occurred between a champion Cavalier King Charles Spaniel successfully being mated with a Bichon Frise; unfortunately, there is not much history known other than this rumored beginning. Although this designer dog was inadvertently brought about a bit later than many such hybrids, the Cavachon was and remains one of the more popular hybrids due to its size and cuddly demeanor.

Unlike the too-cute cross-breed that they parented, the Cavalier King Charles Spaniel and Bichon Frise have long, deep and intriguing histories, and knowing them will help greatly in better understanding your Cavachon.

The Bichon Frise has its origins in the Mediterranean region during the middle ages. By the 14th century, Italian sailors had acquired some of them and, like any loot, were taken back to their country and gifted to royalty and the crew's benefactors.

By the 16th century, Bichon Frises were extremely popular among the nobility in Italy and Spain and were featured in a number of paintings including some by Goya.

By the end of the 19th century, the breed's popularity had waned significantly, and they remained popular primarily by being performers with street artists as well as circuses and fairs. In the early 20th century, they were somewhat rescued when a breed standard was created in France. In early 1933, the Societe Centrale Canine of France officially adopted that breed standard, and it was then that they were given the name Bichon Frise. They were introduced to the United States in 1956, and by 1964, the Bichon Frise Club of America was founded. The AKC recognized the Bichon Frise in 1972.

Cavachons are small, cuddly dogs with thick coats that will be silky as pups and either wavy or curly upon maturation. Their most obvious feature, however, are their eyes: huge, lovable and sparkling set into their big, adorable heads and bookended by somewhat long and certainly floppy ears. Their tails are medium-length and perfectly proportioned to their compact bodies.

The most frequent colors of a Cavachon are white, peach and brown, but they can often enough be black and white, brown/tan/peach and white, or even tri-colored.

When mature, your Cavachon will be small to medium in size, with a weight ranging from 12 to 18 pounds and anywhere from 12 to about 16 inches tall.

12-16 in
*Height is measured in inches from the front paws to the top of the shoulder while the dog is standing on all four legs.
12-18 lbs

Because of the lack of consistency regarding size and coat style (as well as the great loss of hybrid vigor that keeps the dogs relatively healthy), Cavachons are very rarely bred beyond F1, which is the first generation produced by crossbreeding this designer dog's purebred parents. The desire to maintain the double-coated, hypoallergenic and very fluffy coats is chief among the reasons that breeders of this mix will tout their offering of only F1 Cavachons. (You might find F2 and F1b Cavachons for sale, however.)

While most Cavachons will inherit the colors of their Cavalier Spaniel parent, there are those that will get the pure white coat of their Bichon parent. Even rarer still are the Tri-parti, black and tan, and the all-black Cavachons.

It is accepted that there are three basic sizes of Cavachons: Standard, Toy and Miniature (or Teacup). Since size is nearly as important as coat style when it comes to designer dogs, smaller is typically more coveted. When full-grown, the Standard-sized Cavachon is between 15 and 25 pounds whereas the Toy Cavachon tends to be around 10 to 14 pounds. Those that are smaller are casually called a Miniature Cavachon although some breeders will label them Teacup Cavachons too.

The Cavachon's temperament depends on the traits she inherits from its parents — meaning some will get more from the Cavalier King Charles Spaniel while others get more from the Bichon Frise. Then again, she may get an equal amount from both. In any case, Cavachons tend to be very happy, intelligent and extremely playful dogs. They are great family pets and love being around their family to a fault: they easily develop separation anxiety if left alone too long.

As with most any dog, early training and socialization — especially with children so as to prevent injuries — is best. Perhaps the hardest part of adopting a Cavachon is the house training, which requires a good amount of patience and persistence.

Cavachons are fine with children provided they are socialized early with them and the kids understand to not play roughly (as with any small dog). They, of course, love the attention but small dogs are frequently not as forgiving of rough play.

Your Cavachon will warm quickly to other pets, and will most likely want to be with them as much as possible — including during naps and night time! With bigger dogs, they should be watched so as to avoid injuries, of course.

As Cavachons are extremely friendly, they will welcome strangers by barking — but not reliably so (meaning they do not make good watchdogs).

Below are pictures and images of the Cavachon dog breed. 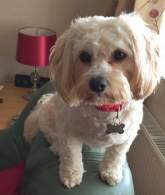 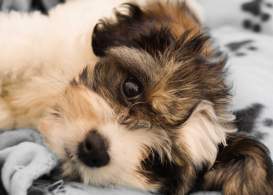 Your Cavachon should be a low-maintenance dog in most every way. With a few trips to the groomer per year, very little brushing and the short daily walk, the only real maintenance required is your love and attention! They love to be around people, other pets and children, and they have few health concerns — although a couple of them can be serious if they inherit them.

For a small dog, the coat of the Cavachon gets relatively long. Grooming every three months is best, and perhaps a trim between each visit too. They are low-shedders (which is why they have long hair), and they will have two coats: one as a pup and then their mature coat which tends to grown in at about six months. Keep yourself on a regular schedule of cleaning the ears, teeth, and trimming the nails.

Cavachons are energetic enough to get a fair amount of exercise inside and by themselves. Nevertheless, a short daily walk will go a long way to keeping him healthy, happy and active. Agility toys and fetch with a ball or stick is also recommended.

Cavachons are best as indoor dogs, but they do love to run around outside, so be sure to have a secure, fenced-in area for them if you wish to let them off the leash outside. Being that they are small dogs, it is best to not let them play in areas where predatory animals may be present as they could attract the wrong kind of attention.

If their coats are allowed to stay somewhat long, your Cavachon should be fine in cold weather. They are not outdoor dogs but a romp in the snow will be a delightful activity to them. If you live in a hot climate, however, you should be sure to keep their coat trimmed so that they don't overheat if they are outside frequently.

Your Cavachon, if kept healthy and happy, should live to be about 12 to 15 years. As far as health problems, they have few possible concerns save for what they may inherit from their parent breeds, and these can be serious: heart and immune system ailments. On a lesser level, they may also have eye and ear problems as well as flea allergies. Regular trips to the veterinarian should aid in detecting those serious issues early, should they occur.

The following dog breed registries and organizations recognize the Cavachon as a dog breed: