The Bullboxer Pit is a hybrid dog that should be produced by cross-breeding only the Boxer and the American Pit Bull Terrier but without a DNA test, you may not be able to ascertain a particular Bullboxer Pit's bloodlines. In any case, this somewhat large-sized and certainly muscular dog is one of those that carries a great social stigma as well as remains the center of an on-going debate. Is this hybrid a fatally dangerous dog waiting for a chance to kill or a loving and loyal family companion that merely needs a lot of patience, training and socialization? If you don't do a massive amount of research prior to getting a Bullboxer Pit, you would be doing the dog a disservice.

The Bullboxer Pit is not classified as being in any particular dog group. It might be noted that one of the parent breeds, the Boxer, is in the Working Dog Group as recognized by the American Kennel Club (AKC). While the American Pitbull Terrier (APBT) is recognized by the United Kennel Club (UKC) but basically ignored by the AKC, the UKC does point out that the APBT is used to herd, hunt and compete. Because of a great number of things regarding this hybrid (which are explained elsewhere on this page), these dogs are not recommended for first-time families, those with small or very young kids or homes with other and / or smaller dogs. People who have a lot of experience with dogs — and especially with Bully / Pit breeds — are perhaps the best for the Bullboxer Pit mix.

In Victorian England, Pit Bulldogs were said to have been "nanny dogs" because they were thought to have done just that: watch over very young children. People for the Ethical Treatment of Animals (PETA) claims that Pit Bull breeds are not naturally aggressive. The group states that so many have been bred to fight while so many more have been abused and abandoned that the widespread, unregulated breeding of the many hybrids — coupled with the stories of dog attacks — have contributed primarily to the current stigma. The Journal of Forensic Science tends to corroborate PETA's claims, basically stating in a 2009 study that vicious and criminal dog owners are to blame for these problems. The American Society to Prevent Cruelty to Animals (ASPCA) flatly states that "Pit Bulls often attract the worst kind of dog owners."

Regardless what you believe or which side you take, there's no denying that the Bullboxer Pit is an extremely intelligent dog. Some say that this dog's superior smarts are what prompts the seemingly unwarranted attacks, as the dog is simply waiting to get rid of the household's alpha. Others claim that the dog's remarkable thinking is manipulated to exploit his equally deep loyalty to make him into a vicious dog instead of allowing him to be the loving companion he's meant to be.

This dog's devotion to his adopted family and their property and well-being is not to be disputed. The vast majority of these dogs are believed to be playful, loving and protective. This devotion, however, can sometimes be to a fault — and if the dog is not properly trained, constantly socialized and managed well, he may be prompted to attack if he feels those to whom he is devoted are threatened. In the case of an attack, there is rarely a warning, for while these dogs make good watch- and guard dogs, they tend to attack without barking.

Part of keeping these dogs in check is exercise — lots of daily exercise. They can easily and quickly become obese and bored if neglected, and this will result in a bad situation. How bad? The obesity will most likely lead to hip dysplasia and other health problems while the boredom will almost certainly lead to bad and even dangerous behavior. It's all but mandatory that you get as much Pitbull Boxer mix info as possible before even considering getting one of these dogs, as there is a lot of responsibility in living with Bullboxer Pits.

Since both parent breeds have a moderate amount of coat colors, you can expect a limited number of the same with your Bullboxer Pit. The basic colors are: 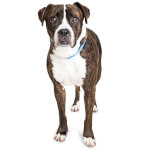 The Bullboxer Pit should come from just two purebred parents, but it's too often the case that they may have other bloodlines and breeds in their heritage. Without a DNA test, you can't be positive.

Assuming that your Bullboxer Pit is exactly that, she should have a very sturdy look: relatively long legs, a strong chest and a large, square head. The coat will be short, shiny and smooth. How big will a boxer pitbull mix get? you may ask. The typical adult male Boxer Pitbull mix size is anywhere from 20 to 26 inches tall, although they may be slightly taller, and they'll usually weigh from 50 to 80 pounds. Mature females will be a bit smaller in size and weight.

20-26 in
*Height is measured in inches from the front paws to the top of the shoulder while the dog is standing on all four legs.
50-80 lbs

Because there is no single defining Boxer Pitbull mix temperament agreed upon universally, these dogs are not recommended for first-time families, people with young children or households with small pets. These mixed breed dogs are best kept by very experienced dog owners who have the resources to train and maintain them.

There are those who claim that this formerly labeled "nanny dog" was called that as hype created in order to maintain the market for Pit Bulls after England outlawed dogs fighting each other and other animals. There are those who claim that the purebred parents and their properly produced mixed breeds are not aggressive by nature but have had their keen intelligence and adamant loyalty manipulated to protect their owners in a deadly fashion. What both camps usually agree is that the Bullboxer Pit temperament includes remarkable intelligence, a great amount of energy and a need to be socialized throughout the dog's life. It is also generally agreed that households with smaller pets are not at all recommended, and that homes with very young children are not the most suitable places for these hybrid dogs.

That stated, they can indeed be very fun, playful and loving. They are also more than a bit stubborn, are often rather difficult to train and may not behave well around other dogs. What this all means is that your Bullboxer Pit may not be all a breeder claims and as such may have an entirely different — and possibly dangerous — temperament due to the unknown ancestry that produced the dog. On the other hand, he could be a properly produced Bullboxer Pit that, with a lot of patience, training and constant socialization, will be the perfect protector of your family, property and well-being.

Below are pictures and images of the Bullboxer Pit dog breed. 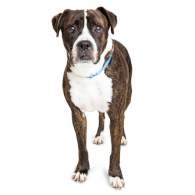 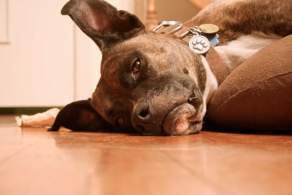 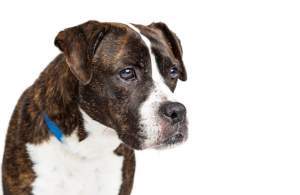 The Bullboxer Pit is one of the hybrid dogs believed to have fewer health problems than most dogs as well as an apparently lower chance of inheriting and / or developing the ailments from that short list. The problems that may occur, however, are obesity, allergies, cancer, heart issues and hip dysplasia. There may also be eye and ear infections that, with proper and constant care and monitoring, may easily be avoided.

Fed well, exercised regularly and kept in a loving home, your Bullboxer Pit should live anywhere from 10 to 14 years.

The following dog breed registries and organizations recognize the Bullboxer Pit as a dog breed: