The Bull-Boxer, also known as the Bulloxer, is a large-sized hybrid that is a cross of the American Bulldog and the Boxer. This crossbreed is playful, affectionate, energetic, and often quite stubborn. Bull-Boxers will normally make excellent, loving family pets, but will need consistent training, starting when the dog is a puppy if possible.

The Bull-Boxer, a breed classified in the Working group, likely originated as part of the "designer dog" craze in the U.S. in the 1980s, when a wide variety of purebred dogs were crossbred to eventually create entirely new breeds. Like its American Bulldog and Boxer parents, the Bull-Boxer is large-sized, friendly, athletic, and sometimes stubborn; this crossbreed makes a fairly good family pet. These dogs are best suited for families with large yards, and owners will need to provide their Bull-Boxers with firm, consistent training and early socialization with children and other animals.

Since its parent breeds -- the American Bulldog and the Boxer -- are very similar, the hybrid Bull-Boxer will share the characteristics of both. This crossbreed is on the smaller side of large-sized, standing 20-26 inches at the shoulders; average weight is 55-85 pounds. Its single coat is short-haired, dense, and fairly stiff to the touch. Bull-Boxers shed minimally and will not require much grooming, but they are not hypoallergenic. A Bull-Boxer is fairly intelligent, but can be extremely stubborn if not trained--and it's best that it be trained early and often!

Interestingly, Bull-Boxers somehow combine the dignity of the Bulldog with the clownishness of the Boxer. A Bull-Boxer might act like the regal canine prince while on a walk with its owner -- but will suddenly chase its own tail for several minutes. Dogs of this breed love to curl up next to their owners -- but be forewarned: strange sounds (and smells!) tend to emanate from multiple Bull-Boxer orifices. (They're known for both their snoring and their flatulence, in other words.)

And like the Boxer, this crossbreed is extremely high-energy. It will be active indoors or out; though Bull-Boxers can live in apartments, they will require plenty of outdoor exercise on a daily basis. It goes without saying, too, that the typical Bull-Boxer is incredibly strong and muscular, and will need plenty of physical workouts to keep its muscles from turning to flab.

The Bull-Boxer's short, dense coat comes in a variety of colors, and can be solid (white Boxer-Bulldog mixes are quite popular), bi-colored, or tri-colored. Dogs of this breed can be white with patches of differing shades of brown; they can be solid golden, or classic tri-colored (white, light brown, and dark brown or black); the brindle Bull-Boxer is fairly common as well. Another frequent coat pattern is a primary coloring of brown, brindle, or gold, with white markings on the face, feet, and underbelly. 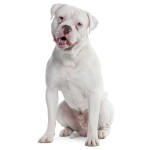 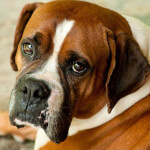 Energetic, affectionate, playful, and stubborn and aggressive at times, this crossbreed can be a welcome addition to the family--but firm and consistent training, along with early socialization with children and other pets if possible, is highly recommended. The Bull-Boxer temperament is normally one of great loyalty to its human family; in return, dogs of this breed need plenty of attention and affection from their owners. Bull-Boxers love nothing more than cavorting around the yard (or even the living room, if you let them!) while playing games and performing tricks. And the more physical activity with these dogs, the better--because a bored Bull-Boxer is often a destructive one.

As previously mentioned, this crossbreed can be quite headstrong, and will need firm training from a person they see as the "alpha" pack master. One training method that Bull-Boxer owners have said works well for them is a scientific "task-reward" system called clicker training. Clicker training is a scientifically proven practice that Bull-Boxer owners say works extremely well for their dogs.

As to watch- and guard dog abilities, the Bull-Boxer is nearly unmatched. This crossbreed is extremely protective of its loved ones; a Bull-Boxer is normally wary of strangers, and might be aggressive towards them if it believes they are a threat. The good news is that, unlike similar breeds like the Pit Bull, a Bull-Boxer will not attack with intent to kill, and will normally calm down after the perceived threat is neutralized.

Provided it receives thorough training (at a young age, if possible), a Bull-Boxer will be great with children and adults alike. With its playful, affectionate temperament, this crossbreed will make an excellent companion for kids--especially when game time comes around. A bit of forewarning, though: its size combined with its enthusiasm might make this breed a danger to small children or infants; a Bull-Boxer's horseplay might unintentionally turn into roughhousing, which can injure smaller kids.

Below are pictures and images of the Bull-boxer dog breed. 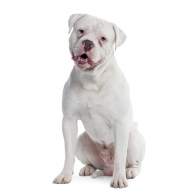 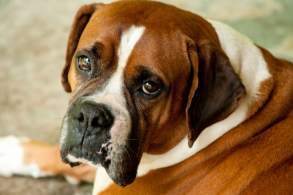 As with many crossbreeds, the Bull-Boxer is extremely healthy overall (some living up to 14 years), but may suffer from common canine ailments like hip dysplasia, bloat, and epilepsy. Bull-Boxers are, however, prone to obesity, so dogs of this breed will need their food portions carefully controlled. A few Bull-Boxers have been known to contract cancer, though this occurrence is rare.

The following dog breed registries and organizations recognize the Bull-Boxer as a dog breed: