The Brittany is upbeat, friendly, and intelligent. Primarily bred for sport, this breed also makes a wonderful companion. The breed originates from Northwest France in the 17th and 19th centuries and appeared in America in 1931. At some point the "Spaniel" was dropped from the breed name because they are more comparable to pointers. The breed places 31st place in the different 155 breeds. They are full of curiosity and energy, requiring lots of attention and exercise for their mental and physical well-being.

The Brittany is a hunting dog whose ability to hunt, point and retrieve is respected far and wide. They make excellent family pets with children in the home so long as the kids understand how to respect the dog's space. Surprisingly, some of the more notable Brittany Spaniel problems come from having a noisy environment. They work well in the field with guns going off, but they tend to get quickly anxious with noisy kids and loud homes. They may not always be the best for first-time dog owners as these dogs require a lot of patience in obedience training.

Here are some Brittany Spaniel pros and cons:

The Brittany is a medium sized dog when full grown. They weigh approximately 30-40 pounds. Common height is 17-20 inches tall. Their medium frame makes them the perfect sport dog or family companion. They're small enough to blend in with surroundings, when hunting yet large enough to get the job done. Their lifespan is 10-13 years.

This breed is great with children and other pets but keep a close eye on them in these situations because their excitement can at times be a little overwhelming for others. The Brittany is exceptionally energetic and requires a lot of exercise, around an hour or more every day. If you're a hunter or highly active, this breed will be a great fit for you and your family. The Brittany needs lots of social interactions and they thrive in environments where they receive lots of attention.

Typically this breed is low maintenance when it comes to grooming. They need weekly brushing of their coats, teeth brushed a few times per week, and nails trimmed two to three times a month or when necessary. Be sure to check around the ears and paws for infections or fleas and ticks. Ultimately, to keep your Brittany healthy, follow these steps and take it to the vet regularly.

Brittany Spaniel history may have been first noted in the 17th century. The breed is named after the region from which the dogs are believed to have originated. Paintings and textile decorations from that century depicted dogs remarkably similar to the Brittany. In later centuries, Englishmen, fond of hunting in that region of France, would routinely leave their hunting dogs during the off-season. Those various Pointers, Setters and Spaniels were probably mated with local dogs, and eventually produced the Brittany.

While the exact Brittany Spaniel origin is murky, there eventually emerged a distinct record-keeping effort. In the mid-18th century, the small Brittany town of Pontou is said to be where the dogs were first formally noted. There, the dogs of a French hunter and English sportsman were mated. This was apparently a more concerted effort than previous ones to produce a superior hunting dog with multiple capabilities and talents: agility, pointing, retrieval, speed and trainability.

Not too many decades later, the Brittany Spaniel, as the breed had become known, became popular at dog shows in England as well as throughout Europe. An 1896 event at the Paris exhibition had a Brittany shown and awarded a prize, and in 1904, there was a Brittany Spaniel champion, "Max de Callac." By 1907, a breed club had formed, and France had formally recognized the dogs. Later that year was when the first-ever Brittany Spaniel, "Boy," was registered. A standard was begun that year, and it was adopted in June 1908.

Brittany Spaniels arrived in the United States in 1928, but it took a few more decades before the breed was recognized in America by the American Kennel Club (AKC) in 1934. The AKC had a standard drawn up and accepted in 1935. The Brittany Spaniel Club of North America was established in 1936 and became a member of the AKC that same year. In 1982, the "Spaniel" was dropped from the breed's name.

Brittanys are compact dogs whose basic squareness and somewhat long-legged stance best describes the general appearance. They are well-balanced dogs whose somewhat small size is sturdy-looking.

The rounded head should nevertheless also have a sharply defined profile. They have a long muzzle that tapers down to a tight mouth with a scissors bite and a large nose. The eyes sit deep in the head, and they have noticeably expressive eyebrows. Their ears are small and pyramid-shaped and rounded on top, and they sit high on the head. This all leads to an arched neck that goes down to a deep chest and short, straight yet strong back that slopes down just a little. The front legs are basically straight whereas the rear legs are well-muscled. Then there is the bobbed tail, which is a bred characteristic. There are rare occurrences of a Brittany Spaniel with a long tail, and these are typically docked.

The Brittany Spaniel coat is dense, and it may be flat or wavy. Feathering is found on the legs, and the hair over the ears is short yet dense. For the most part, the Brittany coat is loose save for the head, where it is tight.

The Brittany colors. Some confusion comes from the roan and ticking in dogs coats, and understanding the difference does take some research.

In any case, the AKC lists 11 colors but only recognizes seven of those. (Black is not recognized by the AKC, although the United Kennel Club and European kennel clubs do.) Tri-colored Brittany Spaniels are accepted but not preferred. Some people may call the colors by other names, such as "chestnut," "brown" or even "chocolate" if the orange appears closer to red.

Here are the universally accepted colors that Brittanys come in: 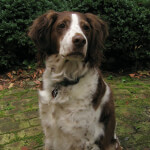 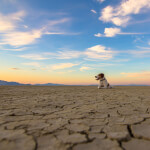 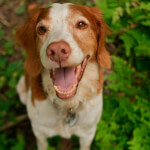 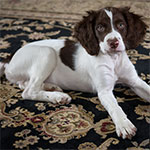 The typical Brittany Spaniel size is determined by two factors: sex and type. The size difference in the two types of dog breed are discussed in Brittany Variations. Within both varieties, the male is larger than the female.

17-20 in
*Height is measured in inches from the front paws to the top of the shoulder while the dog is standing on all four legs.
30-40 lbs

The Brittany is one of those dogs whose variations are informal and yet distinct: there are American Brittanys and there are French Brittanys. These shouldn't be called Brittany breeds, however, as they are variations of a single breed. The French Brittanys were the first to be known. The American Brittanys came about after the breed standard was reassessed a number of times through the 20th century. The differences between the two types of Brittany Spaniels are size, coat color and, according to many gundog enthusiasts, temperament.

The French Brittany smaller than the American variety, and they have compact bodies. They are said to be easier to train, more manageable when hunting and bad more closely with their masters.

American Brittanys are believed to have acquired their larger size from outbreeding to Setters. They are also seen as being more excitable yet are faster and stronger than the French forebears.

Both varieties have the same style of coat but the coloring is different. The one thing that is distinct between the American and French Brittany variations is the color black. Having black in even the nose will disqualify a French Brittany from exhibiting at AKC dog shows. As such, you will find French Brittanys at UKC dog shows, where black is allowed in the nose and coat. (Colors and related breed standards are further discussed in the Brittany Coloring section.) The coat is short yet has a heavy enough fringe to protect against burrs and related annoyances that can occur in the field. There apparently are no known purebreds that are formally called long-haired or short-haired Brittany Spaniels. There may be some breeders who claim to have teacup, toy or miniature Brittany Spaniels, but these are either unhealthy runts or hybrid dogs.

The Brittany Spaniel temperament makes for a wonderful gun dog that is also friendly, excitable and clingy.

They are sensitive to your moods, and it is not unusual for Brittany Spaniel behavior to include whimpering and excess urination. They can deal with the nearby discharge of a shotgun and then retrieve a bird under harsh conditions, but a single harsh word from you can do a lot toward making them anxious. The Brittany dog personality is a playful one, and they are also curious. If a bird gets their curiosity, they will almost always go after that bird.

They may require patience when training for obedience, but when it comes to hunting, they are easy to train.

Below are pictures of the Brittany dog breed. 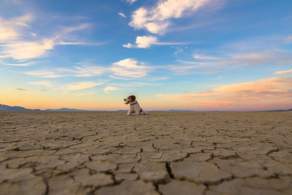 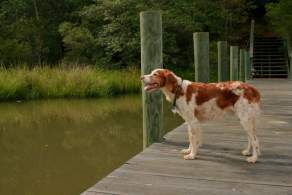 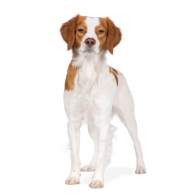 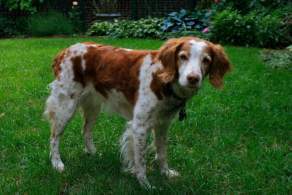 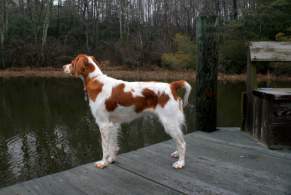 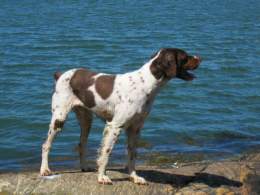 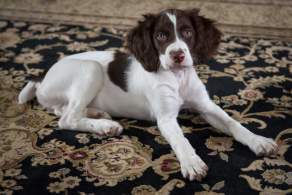 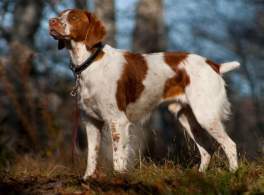 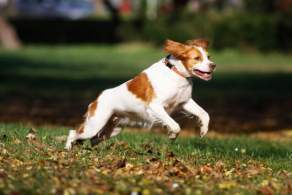 Brittanys may be hunting dogs, but they require a lot of responsibility, companionship, and patience. Because they have very sensitive temperaments, they don't like to be left alone, they don't like loud home environments, and they are easily distracted as well as highly curious. They may bark a lot, but they are also extremely friendly and will welcome most any new friends.

These dogs are not meant for apartment living. Farms, ranches, and rural homes are best, as they need and want space to run, explore and chase. They tend to chase small animals but are especially susceptible to going after birds.

You may be wondering, Are Brittany Spaniels hypoallergenic? They are not. Unlike most non-hypoallergenic dogs, however, they don't shed much, so they don't require much grooming.

The Brittany dog breed has far fewer health concerns than many dog breeds. Some issues, however, are serious, and some are genetic. Some can be prevented by making sure the dogs are well-groomed and exercised. Perhaps the worst (and, thankfully, the rarest) issue is Complement Deficiency. This genetic disposition is not so much a disease in itself, per se, as it is a condition that allows for kidney disease and infections to easily occur.

Here is a list of the health concerns that can affect Brittanys:

According to a United Kennel Club survey, Brittanys have an average lifespan of 12 to 13 years.

The following dog breed registries and organizations recognize the Brittany as a dog breed: