Boxers are a large breed dog which were originally bred for guarding and protection services. This may come as no surprise since the breed's square face, muscular body, and sturdy build appears intimidating even to those familiar with the breed. The breed is a puppy at heart and its not uncommon for boxers to take 3 to 4 years before they are mentally mature.

Even though boxers were bred to be fearless guard dogs, they are loyal to their family and friendly to strangers and guests welcomed by their owners. They are very playful and full of energy. Boxers are an intelligent dog breed, however they are known for being headstrong so it may require patience to fully train the breed.

The Boxer is a former hunting dog whose companionship aspect has come to be the main reason most people get one of these dogs. They get along wonderfully with children but need to be trained to not be too playful, and they will bond closely with your family. They are not the best dog for first-time owners as they can be hard to train and may seek attention in annoying ways. They can adapt well enough to most any size home but they don't like to be left alone much, if at all.

Here are some Boxer facts that can help you decide if you wish to adopt a Boxer:

The boxer is a large dog breed with males getting as large as 25 inches (from ground to shoulder) and weighing as much as 70 pounds. They have high energy requirements for a large dog and require multiple walks daily or a 90 minutes of day of similar exercise. Due to their high exercise needs, boxers are not recommended for families that can't devote the time to keep their dog well exercised.

The boxer is an intelligent dog breed that is always in the mood to play. They are very alert dogs with a natural guarding instinct. The breed is good with children and other pets, but will be a bit wary of strangers approaching their family's property. Even though the boxer is a guard dog, they will welcome friendly strangers.

Boxers have a short coat, which doesn't provide very much protection from the cold. Because of this, the breed will need to remain indoors on days where you need to bundle up. The breed sheds, but brushing their coat weekly helps reduce excess hair from shedding.

The history of Boxers is a somewhat short one. This Molosser breed was developed by a small group of German breeders during the very late 19th century. The breeds that make a Boxer are said to have been a mastiff called the Bullenbeiser (aka the "bull biter," which is now extinct) and a variety of Bulldogs from England. The Boxer was produced to be a faster hunting dog meant to bring down the same large game as its ancestors: bears, wild boar, etc.

The origin of the breed name, Boxer, remains debated. Although there are distinct records starting around 1894 when the first Boxer club was formed, the name "Boxer" had been used as far back as 1845 in Charles Dickens's novella,"The Cricket on the Hearth." Many theories revolve around the dog's alleged habit to "box" while standing on his rear legs, but it may be more the fact that the dog prefers to head-butt when fighting. It could be that the breed's name was actually conceived in recognition of the German meaning for the term, prize fighter: boxer.

The first club, the Deutscher Boxer Club, was responsible for the first Boxer breed standard. The standard had been first drafted in 1902 and faced fierce competition from competing Boxer breeders. Nevertheless, the American Kennel Club (AKC) adopted the Deutscher's breed standard the same year it was published in 1904.

During WWI, Boxers were used for a great many tasks by the German military. Had they been left behind in Europe after the war, Boxer history may well have ended there too. After the war, Ally soldiers took rescued Boxers home to the United States, where the breed's popularity grew quickly. The dog's first AKC Championship was taken in 1915, and in 1935 the American Boxer Club was established.

Oddly enough, the Boxer is proportional in much the same way as a square box. Their block-shaped head and muscular body are all about sturdiness.

The Boxer's skull is somewhat "jowly" and will have a slight underbite. There is a distinctive set of wrinkles on their indented forehead. In some countries, cropping a dog's ears is illegal, and so you may see Boxers with their naturally floppy, natural ears that lay flat alongside the head. The big, dark eyes will accentuate these features. They have an elegant and strong neck that leads to a strong and straight back. The torso is lean torso but not thin. The front legs are of medium length and may look shorter than they are due to the deep chest. The feet are compact but may look large as they are high-arched. Their rear legs are very strong, and they will often have a docked tail. If the tail is not docked, it will be long.

The coat is short, smooth, tight and shiny. There should be no wrinkles save for the few on the forehead.

There are only three Boxer colors: fawn, brindle, and white. Fawn is a base color that in some dogs is interrupted, so to speak, by brindle. White Boxers are not that common but are not entirely rare, either. Because white Boxers have a higher chance for deafness, they used to be culled at birth. There are also so-called black Boxers that are not black but brindle with a very heavy pattern that makes them look black. If you have heard about blue Boxers, those, too, are not so much blue as an inexplicable pattern.

If you see Boxer puppies that are said to be silver, grey (or gray), mahogany, chocolate, yellow or red, this is misleading. Reputable Boxer breeders will probably suggest staying away from people who use misleading terms just to sell a Boxer puppy. 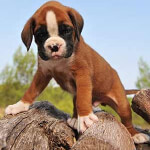 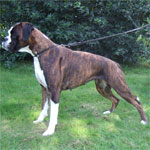 If your Boxer matures but is still very small yet out of proportion, this may be due to Canine Dwarfism. This is not a variety nor is it desired. It is caused by a health condition. You may want to consult a Boxer height and weight chart to make sure your Boxer puppy is growing properly.

21-25 in
*Height is measured in inches from the front paws to the top of the shoulder while the dog is standing on all four legs.
53-70 lbs

There are big Boxers and there are small Boxers, and these are usually no smaller or larger than about 10% outside the AKC breed standard's size. There are, however, no micro, teacup, mini, toy, giant, XL, XXL or king Boxers. There are also no long haired Boxers, let alone any varieties. If you are told there are, you can be sure they have been crossed with some other dog breed.

There are Dwarf Boxers, but these are dogs that are born with a severe health condition that prevents the dog from fully maturing. It will also make them disproportionate, such as a properly sized head but a small body. On the other hand, you may have seen any one of the many biggest Boxer dog in the world photos. These are all fake.

The Boxer temperament is a fun-loving and playful one. Around most people, they will seek attention and big like a big puppy. Boxers are big dogs who try to be little lap dogs. They will want to be with you in a chair, on a couch, in a bed or wherever else they think they can fit even if they can't!

On the other hand, they can quickly become very protective and go into fierce guard mode if they feel threatened. One of the Boxer traits, loyalty, is one that is appreciable but must also be managed as they will not hesitate to be your bodyguard.

A Boxer's behavior is the most difficult when it comes to training, as these dogs are known to not be so much stubborn as simply not concerned. Patience, persistence and the right amount of treats is a good formula for shaping the typical Boxer character.

When it comes to Boxers and kids, you will find fewer ideal dogs. The Boxer is a great family dog that will love rough-housing, constant playing and kids when they are noisy. On the other hand, Boxers and babies do not mix so well. This breed has a well-known tendency to playfully pounce on people no matter their size or age. Boxers also have a greater need to dominate, and this may not be understood by toddlers or young children. It is essential that you closely supervise when your Boxer is playing with the baby or any kids under 6 years old.

Your Boxer and cats may not mix well until properly socialized. These dogs tend to have a bit too much curiosity when it comes to cats, and they will often give chase. While their intent is typically not to catch the cat, the cat won't know this. It is not unusual for Boxers to also chase farm animals such as pigs, goats, and ducks. They can be trained to not chase cats and other animals, but they might not be trusted around them without supervision. When it comes to other dogs, they are prone to aggression toward those of the same sex.

Below are pictures of the Boxer dog breed. 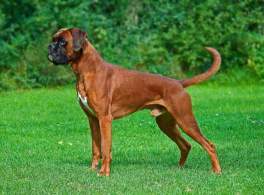 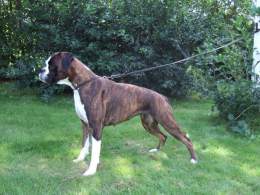 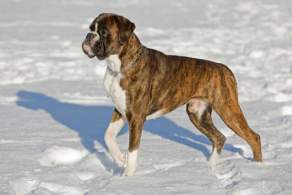 Boxers are very vocal dogs, especially as puppies, and it's a deep bark that can rattle you. In their non-stop quest for attention, these dogs are known for driving people batty with seemingly endless bouts of barking. If you are unsure how best to properly curb their barking, you may want to hire a professional dog trainer to help. They are protective of family members, but they should not be aggressive toward friends of the family. They are also prone to separation anxiety, and they will express this anxiety with chewing and — you guessed it! — barking.

Although Boxers need a lot of daily exercise, they don't need a huge yard. They will love a farm, of course, but if you live with a Boxer in an apartment, they will adapt.

Owning a Boxer as a pet is sure to raise the question, Are boxers hypoallergenic? They are not, and they are moderate shedders who drool a lot too.

Boxers tend to have a higher average number of health problems than most dog breeds.

Boxer puppies are rambunctious, and this can also be problematic. They need to develop their skeleton to be strong, and early rough-housing can be damaging. If you are going to adopt a Boxer puppy, you need to make sure you get the dog from a reputable breeder or rescue and get all the health tests.

Here are some of the health issues you should know about Boxers:

The average lifespan for a Boxer is 10 to 12 years, a period which is somewhat short for this breed's size.

The following dog breed registries and organizations recognize the Boxer as a dog breed: