The Border Terrier is a very popular small dog purebred dog breed which was originally bred to assist in fox hunts. These high energy dogs still retain their hunting instincts today, which can make them a challenging breed for many inexperienced owners.

The breed is affectionate, good tempered, and easy to train which makes them ideal pet for families who know how to tame their hunting instincts. They make great family dogs and can cope with different living environments whether its a small apartment or a house on a farm.

Border Terriers were bred to be fox hunters: fast, wily and able to scrap in tight places. They were also bred to be companion dogs when not working. As long as they have daily and strenuous exercise, there should be few Border Terrier problems at home. They work well enough for first-time dog owners, and they can take a lot of accidental abuse from very small children who are exploring the boundaries of their new world. They are not good for people who are away from home, however, as they require a lot of people company.

Here are some Border Terrier facts that you should know:

The border terrier was originally bred in Northern England to aid farmers with their constant battles against the fox. The breed's narrow and flexible body was perfect for squeezing into holes and fox dens to flush out the foxes for the farmers. To this day border terriers have a very demanding digging instinct and will quickly dig themselves into trouble if left unattended and bored in a yard.

The border terrier is a high energy dog. This was necessary as the breed was bred to keep up with the farmers on horseback during fox hunts. Because of this the breed will need at least 30 minutes of exercise each day (which is quite high for a small dog). Lack of exercise can cause the border terrier to become hyperactive and lead to the development of destructive habits.

Border terriers are an intelligent breed and are eager to please their masters. They pick up new tricks quickly and will quickly recognize subtle clues in their masters behavior, which makes it easy for border terriers to know when they're about to be fed or go outside. They make good family dogs and can easily match the energy levels of children. Border terriers do best with other dogs as they will often chase cats and other household pets due to their fox hunting instincts.

Border Terrier history is just a few centuries old. These dogs emerged at the end of 18th century. Farmers in the northeast regions of England wanted a dog that could control the fox population. The Border Terrier had the stamina, long legs, small head, and narrow body to keep up with the horses and flush the foxes from small hiding places.

Originally called the Coquetdale Terrier and the Redesdale Terrier depending on where the dog was from, the name "Border Terrier" did not come about until the end of the 18th century. They are related to the Bedlington Terriers and Dandie Dinmont Terriers. The Border Terriers worked alongside the Border Foxhounds, and they were a greatly prized pair that was said to be better than any other set of dogs when hunting foxes.

For the next century or so, these dogs remained essentially the same. They were first shown at dog shows toward the end of the 19th century, when they were noted at the Bellingham show. Unfortunately, few records seem to exist and what is available may not be available widely.

By the early 20th century, records and recognition began to emerge. The British Kennel Club registered its first border Terrier in 1913, but it was under a relatively non-descriptive category title "Any Breed or Variety of British, Colonial, or Foreign Dog -- Not Classified." In 1914, an attempt to get a separate breed registry was made but rejected. In 1920, formal recognition was finally attained. That year, the Border Terrier Club was founded.

In Harwick, the Club was formed with a bit of controversy. There were those who believed that forming a club would allow the breed to be ruined for the sake of show conformation. Nonetheless, the two sides managed to draw up a standard. When the Club was accepted into The Kennel Club in September of that year, there were 121 members listed.

The Border Terrier is a small dog, but they are extremely hardy and sturdy canines with no frills and which aren't meant to be cute in the lapdog way.

The otter-shaped head is perfect for getting into small holes and between bricks where foxes hide and run. The eyes are medium in size, which gives the face a no-nonsense look. The Border Terrier head is crowned with triangular ears that have a considerable thickness and usually fold over toward the front. They have a large nose but a relatively small muzzle and the teeth are the scissor-bite type. The neck size is significant and is backed by a muscular set of shoulders and an able back. The legs are long, with lean forelegs and robust hindquarters. The tail is short yet thick.

This Terrier's double coat is earthy-colored with a wiry outer coat and a soft, thick undercoat. Coat types can range in fur length, and they are discussed in the Variations section.

Border Terrier colors are plenty! As puppies, they start out in just two colors, however: black and tan, or grizzle and tan. The black and tan puppies will grow into blue and tan coats. Sometimes the coat will remain very dark and people may call this a black Border Terrier. Individually, the hairs are silver, white and gray but they appear as a blue tint. The other puppies, the grizzle, and tan ones, grow into other colors. Those are brown, grey, sandy and white. Occasionally, these grizzle-colored puppies will become wheaten or red, but only rarely so.

The known adult colors of the Border Terrier are: 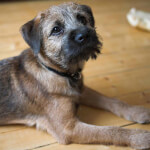 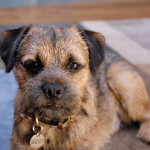 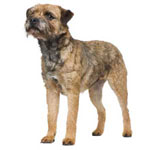 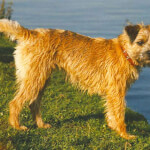 10-16 in
*Height is measured in inches from the front paws to the top of the shoulder while the dog is standing on all four legs.
11-16 lbs

While there is a great variety in the types of Border Terriers, it is primarily in the length of coat. Even those "varieties" are not so much variations as various lengths of hair on the dogs. There are obviously long-haired Border Terriers, and those that are short-haired, and many lengths between All Border Terriers are born with smooth coats and they stay that way until a year or so. There are smooth-haired ones too, and that happens when the fur fails to fully develop. Some breeders will hand-strip their Terriers so that the smooth undercoat is viewable at dog shows, but the rough outer coat will grow back in time. Once mature, most Border Terriers are wiry haired, and this is the preferred texture due to the work these dogs are bred to do.

As for toy, teacup or miniature Border Terriers, there are none. Cross-breeding can make hybrid Terriers smaller, but they are no longer purebred Border Terriers.

The Border Terrier temperament is less jumpy and jittery than the typical Terrier. One of their traits is curiosity, however, and they do like to bark at most anything that moves. If they become anxious, they might bark more than usual, chew things up or start digging like crazy. The focus that makes them so admirable can also be annoying, for once they get their mind set on something they want, it's difficult to get them away from that goal.

With prop training, what would otherwise be frustrating border terrier characteristics can be very useful. these dogs are keen to play with kids, hang out with the family and be excellent vermin exterminators. They tend to be easier to train than most Terriers, and they will delight in learning by way of hunting for toys. Although they are extremely hardy breeds that can easily weather the harsh climes of northern England, they don't respond well to harsh training.

There are those who may wonder, Are Border Terriers good family dogs? Furthermore, Are Border Terriers good with children? They can be both, but it's best if the children are no younger than 7 or 8 years old. While these Terriers are a bit less high-strung than most Terrier breeds, they are still small, scrappy and not overly accepting of nonsense. If you want your Border Terrier and children to get along, the kids shouldn't tease the dog or play around when it comes to feeding time. They also should know to be careful about doors, gates and even small windows. These dogs have a strong hunting drive, and a squirrel or some other furry critter outside might make them bolt through a seemingly small space to get it.

Border Terriers and cats can be problematic. If they are raised together from shortly after birth, this will help things a lot. There may still be the occasional chase, especially if the Terrier gets anxious, is left alone at home for long or is without exercise. Adopting one when you already have a cat, however, is not recommended. The Border Terrier temperament is born and bred to withstand being scratched and bitten by other animals. They will be set in their ways, they won't be able to resist going after your cat, and they will most likely be able to get at them anywhere they hide. It should go without saying that most other small, furry pets — such as rabbits, hamsters, etc. — are simply not good to live with these Terriers.

Below are pictures of the Border Terrier dog breed. 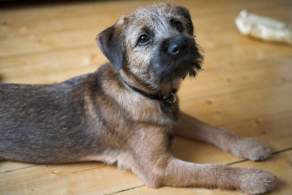 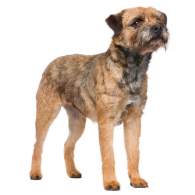 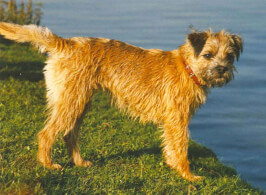 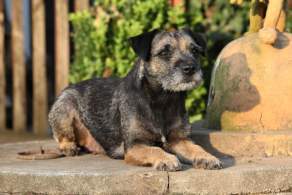 Border Terriers as pets can present extremes that are good but others that are frustrating. They are high-energy dogs that love to dig, explore and chew, and they tend to do these things more than most dog breeds. They are also extremely doting, low-maintenance and adaptable to most any living situation.

Whether you live in an apartment, a micro house or a sprawling farm, your Border Terrier will be fine — so long as she gets the exercise she needs. They are tempted to explore far and wide, so they must be restrained in ways that most dogs breeds are not, such as wires under fences and making sure even small windows are secure.

Of course, a big question is, Are Border Terriers hypoallergenic? Yes, and they shed very little. They blowout about twice a year and they shed relatively little even then. To make sure the entire coat is shed, you will probably need to hand-strip the coat.

As a breed, Border Terriers tend to be more healthy in general than most dog breeds. Many clubs recommend only two essential health tests. (Most dog breeds are recommended to have no fewer than four certified health tests.) Those tests are for the eyes (CERF) and the hips (OFA).

Still, there are some problems that can affect your Border Terrier. Some of those health issues are genetic, and others may develop due to diet, lack of exercise or even in the natural course of life (or hunting).

Here are some of the concerns for which you should watch:

The average lifespan for Border Terrier is 12 to 15 years.

The following dog breed registries and organizations recognize the Border Terrier as a dog breed: