The Beaglier is a small to medium hybrid dog produced from cross-breeding a Beagle with a Cavalier King Charles Spaniel. Both parent breeds will contribute their traits, but there is always the chance that your Beaglier may get more Beagle than Cavalier, or vice-versa — or inherit a balance of both parents' traits. Not all of them will be the same even if they come from the same litter. It's always best to learn about the parent breeds so as to understand the Beaglier you plan to adopt.

Beagliers are great family dogs: they love children, playing and being with people. They are a bit difficult to train, however, so patience, persistence and early socialization are needed to help your Beaglier be a happy member of your family. They get along well with other dogs, but smaller, non-canine pets may get chased. Overall, they are low maintenance crowd pleasers.

Below are details and specs for the Beaglier dog breed.

The Beaglier tends to be a small- to medium-sized dog which stands 12-16 inches tall and weighs 10-25 pounds.

Your Beaglier will love to be around you, your family and people almost all the time! They love kids, usually welcome strangers and are good with most other pets. (Smaller pets and other animals may trigger their hunting instincts, however, so they should be watched around them.)

When it comes to maintenance, Beagliers are moderate in their requirements. They need daily walks, very frequent brushing and a fair amount of care. A thorough brushing every day is a great help to keeping her coat clean and your house relatively free of hair, and her ears and teeth need to be inspected often so as to make sure they remain clean and disease-free.

The Beaglier is one of the relatively new hybrids; due to this, there is very little history. There is some, however: the Beaglier is said to have originated in Australia in the 1990s. Knowing the histories of the parent breeds — the Beagle and the Cavalier King Charles Spaniel — will help you to understand your Beaglier.

The Beagle is well-known for possessing an extraordinary sense of smell, and by these olfactory talents (and floppy ears), they have been traced back to their basic beginnings in the 5th century in ancient Greece. In the 11th century, WIlliam the Conqueror took the Talbot Hound to England and it was there that he may have bred the dog with a Greyhound so as to produce a faster dog that retained the Talbot's sharp sense of smell, and that the result was the Southern Hound — which is believed to be the direct ancestor of the Beagle. Several centuries later, in 1830, Great Britain's Reverend Phillip Honeywood was credited for producing the groundwork for the modern-day Beagle. The Beagle was one of the first breeds to be recognized by the American Kennel Club (AKC), and was done so in 1885.

The Beaglier is a hybrid which will inherit characteristics from both parent breeds. As not all Beagliers will get the same traits, some will have more have more Cavalier King Charles Spaniel in them and others will have more Beagle.

The coat may be short and soft (like the Beagle) or silky and longer (like the Cavalier King Charles Spaniel). In either case, he will be a small- or medium-sized dog with a short, rounded muzzle and big eyes. If he has a preponderance of Beagle, the ears may be floppy and somewhat bare-looking; if there is more Cavalier present, the ears will still be somewhat long and floppy but will be covered with long, silky hair.

Thanks to their parent breeds, Beagliers tend to come in a wide range of colors including black, white, brown, tan, cream and red as well as two- and three-color combinations of these colors. 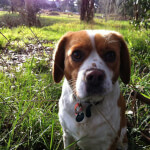 Beagliers are small dogs that can nearly reach medium size and weigh from 10 to 25 pounds and stand from 12 to 16 inches.

12-16 in
*Height is measured in inches from the front paws to the top of the shoulder while the dog is standing on all four legs.
10-25 lbs

Beagliers are extremely friendly, able to understand people to an extent, and are very fond of their families. They especially love being around people and are crowd pleasers. Despite all these wonderful qualities, they can be difficult to train and do not respond well to punishment-based training; they require firm and persistent positive-technique methods.

Beagliers are one of those dogs that love children and usually do not get snappy with them if the play gets a little rough. Still, it is best to socialize them early on as well as to teach children to not play too roughly.

As both parent breeds are pack dogs or come from ancestors that were, Beagliers get along very nicely with most other pets. They may be tempted to chase smaller pets, however, as both parents come from hunting stock, so care should be taken if such animals are present.

Beagliers love to please, and around strangers they are sure to be friendly and seeking the human attention they so love.

Below are pictures and images of the Beaglier. 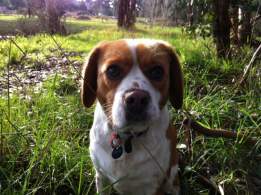 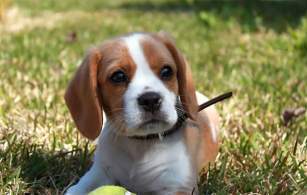 The Beaglier is a low- to medium-maintenance dog that sheds moderately and needs daily exercise such as medium-length walks. They will need a fair amount of brushing — daily is best — as well as cleaning up afterward.

Beagliers usually shed a moderate amount of hair, but they may also shed a lot; they are not hypoallergenic dogs. As such, daily brushing will help to keep his coat free of excess hair and your furniture easier to vacuum. Bathing should only be done when needed so as to not destroy the essential oils in his hair. You should regularly check his ears, brush his teeth two to three times a week, and to clip his nails if you hear them on the floor when he walks.

Daily walks (and playing with toys and children) are essential to help burn off the stamina your Beaglier may have have inherited from the Beagle side, and some gentle persistence in getting this guy to exercise may be required if he has too much Cavalier King Charles Spaniel — as this breed likes to be at rest frequently due to their long-ago heritage of being primarily a royal pet).

Beagliers tend to be adaptable to most homes, be it a large country estate or a small apartment. If they have lots of outdoor space to run and play, they'll almost certainly do that.

Your Beaglier will not live well in cold climates. If they have the short coat of a Beagle, cold weather can be very uncomfortable for them. They tend to prefer warm climates.

Although cross-breeding usually reduces the chance for health problems, the Beaglier is one of the cross-breeds that tends to have more problems than most designer dogs. They are at risk of having or contracting epilepsy, eye problems, thyroid ailments, dwarfism, joint problems and ear infections, among other things.

The following dog breed registries and organizations recognize the Beaglier as a dog breed: