The Beabull is a slightly silly-named hybrid dog that finds its purebred parents in the Beagle and the Bulldog. As these two purebred dogs are very different in most ways, so too can this crossbreed chance the odd look: floppy ears, sad eyes and the occasional yowling of the Beagle set atop the possibly very wrinkled, barrel-shaped and short-legged Bulldog body can occur. In any case, these odd hybrid dogs are thought to have been first conceived in the 1990s when the designer dog craze was at full-tilt. They are not the easiest dogs with which to live, and they are often not recommended for first-time families.

The American Kennel Club places the Beagle in the Hound Group and the Bulldog in the Non-Sporting Group. It is practically a given that this mixed breed won't perform as well as a Beagle (although she will almost definitely have a better nose than most dogs) or a Bulldog (although she may be a bit pushy, cute and "drooly" like one!). As you'll see from the many Beabull facts listed below, this designer dog is best suited for families with some dog experience as well as a lot of patience.

Because the parent breeds have little in common, there is a wide range of personality traits and appearance aspects that your Beabull my inherit. Perhaps the two things these dogs will almost assuredly acquire from their purebred parents are short legs and, to put it lightly, a bit less power in the mental engine than most dogs.

There may not be much Beabull information on why these dogs typically lack the smarts of most hybrid dogs. What is known is that Bulldogs and Beagles tend to be difficult to train and headstrong. Bulldogs can be easily distracted, and Beagles work best in packs whereby a canine alpha guides them. As long as you prefer to have this mixed breed as primarily a companion and playmate, you shouldn't have much difficulty. If attempting to get them to do tricks and exhibit obedience, however, you will probably get little return on the investment of energy required.

On the other hand, these dogs don't lack loyalty and a desire to accompany you. They will play with you — but when they want to nap or just lie about, they'll usually not be persuaded otherwise. These dogs typically possess a moderate amount of stamina, but they are often seemingly lazy. If there is a lot of Bulldog in your Beabull, chances are that he will be very strong.

Depending on the type of Bulldog with which the other parent — the Beagle — was mated, your Beabull size could be anywhere from medium to nearly large. A Beabull full-grown can be anywhere from 30 to 70 pounds in weight and stand from 12 to 16 inches high. While the weight is considerable for the height, the dog is sure to be short due to the legs; both purebred parents sport short legs and it is sure that your full-grown Beabull will be no different.

12-16 in
*Height is measured in inches from the front paws to the top of the shoulder while the dog is standing on all four legs.
30-70 lbs

For the most part, the Beabull temperament is an easy-going one. Both parent breeds tend to be loyal, devoted and friendly dogs who also enjoy long naps and lounging about in the sun, and Beabull characteristics tend to follow suit. They can be a bit rambunctious, however, as well difficult to train.

As puppies, you shouldn't indulge in play-fighting with them as they may become uncontrollable in this aspect when they are older — and much larger. You'll find that they have have occasional bursts of almost uncontrollable energy at times, and that they may express themselves with the strong barking for which Beagles are notorious. You would do well to be strong, physically and mentally, as they may at times try your strength and your patience.

Below are pictures and images of the Beabull dog breed. 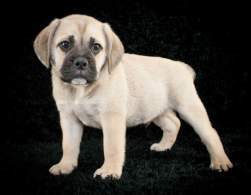 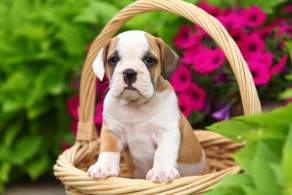 Beabulls come from two parent breeds with very different health issues, and while hybrid vigor may help mitigate many of these problems, there are still various possibilities. The two most obvious issues could be ear infections if they have the long ears of the Beagle and / or skin problems if they get the wrinkly facial skin. Both of these concerns can be kept at bay if you keep your beautiful Beabull well-groomed — including gently washed ears and frequently cleaned wrinkles.

Other, more serious and perhaps less possible health complications include:

When you take good care of your Beabull, the average life span tends to be from 10 to 13 years.

The following dog breed registries and organizations recognize the Beabull as a dog breed: