The Basenji is a medium-sized, short-haired breed native to Africa. Often called the "Barkless Dog," a Basenji normally doesn't bark, but instead produces a series of yodels, yips, and howls. Dogs of this breed have strong hunting instincts, and while affectionate and playful with those they know, they can be quite independent and self-willed. These energetic dogs require moderate maintenance (minimal grooming but frequent exercise), and can be hard to train. Basenjis are best suited for active singles, families with older children, or those looking for an active outdoor companion.

The Basenji is a member of the Hound group of breeds, and has for centuries been used as a multi-purpose hunting and working dog. Though they make decent family pets, their independent, energetic demeanors aren't for everyone. Basenjis are best suited for busy singles, families with older children, or those looking for an active hunting companion.

A few Basenji facts: they're medium sized (height at the shoulders averages 17 inches, and weight 22 pounds), with fine, short-haired coats that are usually bi- or tri-colored. Here are some advantages and drawbacks of owning this athletic breed:

Basenjis, more than most other breeds, are often compared to cats in both physical and behavioral terms. These dogs move with grace and confidence, they often clean themselves, and they have independent, self-reliant personalities--catlike qualities, for sure. Basenjis are very intelligent, but seem to only use their smarts when the situation benefits them (yet another feline similarity); this independence can make these dogs quite hard to train.

Perhaps the most interesting trait of these already-unique dogs is that they normally don't bark, but instead emit a combination of yodels, yips, yowls, and even screams. They're known to "crow" when happy, and almost yell when disturbed; though the Basenji is commonly known as the "Barkless Dog," a dog of this breed is anything but silent--and this interesting trait can actually be alarming to a new owner who is unaware of the tendency. Adding to their uniqueness (and their catlike qualities) is the fact that Basenjis dislike water, and hate to get wet.

Basenjis are also extremely active; in fact, the first rule of "Basenji Dogs 101" is that they need plenty of exercise. Daily walks or jogs are great, but be sure to use a leash, as these dogs have the tendency to run off if given the chance.

Basenji history begins thousands of years ago in Africa, specifically in the Congo; "basenji" is a Congolese word that loosely translates to "dog of the bush." Anthropologists believe this breed is a direct descendant of the Gray Wolf, and that Basenjis are closely related to Dingoes, since the breeds share a number of physical and behavioral traits.

Historians contend that the Basenji's origin can be traced as far back as the ancient Egyptians, as drawings on the walls of the tombs of Egyptian pharaohs depicted dogs believed to be of the Basenji type. In any case, historians think Basenjis have been used for thousands of years as small-game hunters; since they don't bark, they were likely prized for their quietness while tracking and chasing birds and rodents.

The Basenji breed went largely undiscovered outside Africa until the mid-nineteenth century, when European scientists found the dogs living with Congolese tribes. One such scientist was German botanist Dr. Georg Schweinfurth, who discovered these dogs while studying the plants of Central Africa. Schweinfurth later wrote about Basenjis, which he discovered living with African Pygmies: "...A small breed resembling the wolf-dog, but with short sleek hair, they have ears that are large and always erect, and a short curly tail like that of a young pig. They are made to wear little wooden bells around the neck so they should not be lost in the long steppe-grass." Attempts were made to export the dogs to Germany, but the initial attempts failed, as the dogs died of disease.

By the turn of the twentieth century, though, Basenjis were known throughout Europe and North America, though they were still considered rare. In 1939, the Basenji Club of Great Britain was established in England, and the American Kennel Club officially recognized the breed in 1943. Today, Basenjis are still fairly rare worldwide; the breed ranks 88th out of 190 breeds recognized by the AKC.

Those that have heard of the African barkless dog may wonder what a Basenji looks like. The overall appearance brings to mind a sense of compact power. Though they're fairly small, these dogs are muscular and agile; their bodies, in human terms, are comparable to a skilled lightweight boxer.

This breed's body is normally about equal in height and length. Its head is the shape of a fairly narrow wedge, and its eyes are medium-sized, almond-shaped, and brown; a unique trait is that its face and brow are capable of several "expressions" not normally seen in most other breeds. The Basenji's ears are high-set, triangular, and stand erect; the chest is somewhat wide and deep; the legs are long, limber, and straight, giving speed, agility, and a "racehorse"-type gallop; and the Basenji's tail is fairly short and curled over the back.

The Basenji coat is single-layered, short, and fine.

Basenji colours: most dogs of this breed are bi-colored, with a darker primary color mixed with white markings on the feet, chest, and tail. Brindle Basenjis are quite common; other possible colors, all mixed with white-- examples are red and white, brown and white, and black and white Basenjis. Tri-colored Basenjis (with black, brown, and white coats) are possible as well. Solid red or black Basenjis do exist, but are rare. 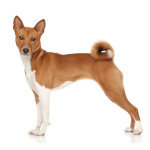 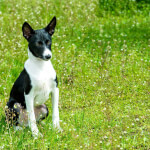 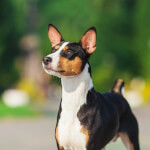 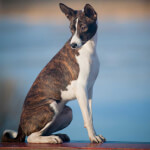 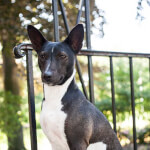 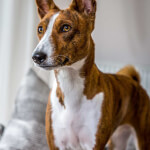 For potential owner wondering "How big do Basenjis get?"  -- fear not, a Basenji's size is only considered to be medium. This is contradictory to what you might think when picturing an African dog breed on the plains hunting lions. Basenji weight is 20-24 pounds; height at the shoulders is 16-18 inches.

16-18 in
*Height is measured in inches from the front paws to the top of the shoulder while the dog is standing on all four legs.
20-24 lbs

The Basenji is a breed of dog with no known sub-types in regards to size, physical features, or coat length. A few breeders may offer "Miniature Basenjis" or even "Toy Basenjis" for sale--and while those dogs are indeed smaller (10 inches in height, 14 pounds in weight, for example), they were created through generations of selectively breeding small Basenjis, and are not a recognized breed variation. A baby Basenji bred in this way has a much higher risk of hereditary diseases. Smaller types of this dog may also be obtained from crossing the Basenji with a smaller breed of dog, however, at this point it is no longer a Basenji (purebred).

Energetic, intelligent, alert, comical, extremely independent, and sometimes stubborn, the typical Basenji temperament is one of cleverness and self-sufficiency. Dogs of this breed are usually affectionate and playful with family members, but a bit reserved around strangers. The Basenji's characteristics ensure he is pretty good with kids (particularly older ones who know how to treat the dog with respect and gentility); they will need plenty of socialization with other pets, and don't do very well in homes with small pets like cats, rodents, birds, or ferrets, as their high prey drives instinctively causes them to chase (and possibly injure) these small animals.

As to training: teaching a Basenji tasks and commands can be difficult. These dogs definitely think for themselves, so owners will need plenty of patience and consistency during any training. They also respond poorly to harsh treatment, and will become totally unresponsive if punished. The behavior of a bored Basenji will be destructive and a severe nuisance so ensure you can exercise them for an hour each day or at least let them out into a fenced yard to play.

On the other hand, the Basenjis' traits make for good watchdogs. Their loyalty and alertness means they will notify humans at the sign of threats--not with barks, but with a series of yodels, yips, and howls.

The African Basenji is a dog that is good with almost any family provided they get enough exercise. They are calm, quiet and often aloof unless you are one of the chosen few family members whom he/she bonds to most closely. This ensures Basenjis are good with kids. They may not chase a ball or fetch a stick but they are loyal and intelligent so, if trained and socialized early, they will know how to appropriately interact with kids. This goes both ways though; young children should be taught how to be kind and gentle with pets.

Basenjis are still utilized to hunt on the plains of Africa. It is impossible to suppress such an instinct in a Basenji due to their stubborn independence. This means that Basenjis and cats are not typically an ideal match, although a Basenji puppy raised and socialized with your household cat from puppyhood may be able to coexist with YOUR cat only. They are very likely to chase and pester any small critter. We advise keeping them leashed while outdoors unless you are in a fenced area.

Below are pictures and images of the Basenji. 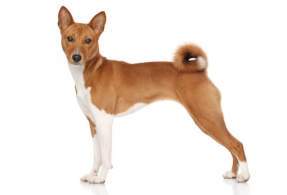 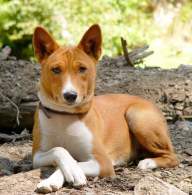 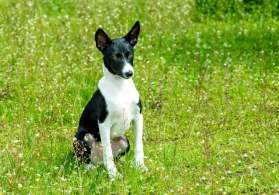 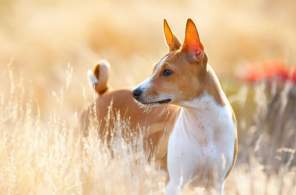 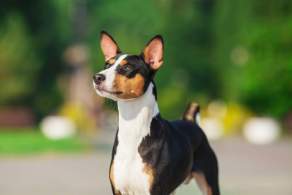 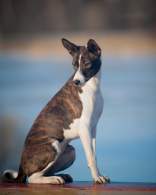 Owning a Basenji can be challenging for some. They're quite energetic, and while they prefer living inside they still require a lot of exercise. But probably the most annoying Basenji trait: anything these dogs can fit into their jaws, they will chew on! Basenji hounds are known to be very stealthy and sneaky! Though some consider doing so inhumane, many experts recommend leaving a Basenji in a crate if the dog is to be home alone for extended periods; this will keep owners from returning home to find their shoes, remote controls, even their furniture in tatters.

Another option is to put the dog in a pen or fenced area while it's alone--but be prepared for the dog to escape. Basenjis are capable of climbing fences (or digging under them)--and as hunting dogs, they will likely chase any animal they see or hear. These dogs are happiest when they live inside with their human families.

Fortunately, Basenjis are hypoallergenic, so they won't be a problem for allergy sufferers. Neither do they shed much, so hair cleanup isn't a big undertaking. Another fortuitous trait is that they are quiet, making them good choices for apartments and condos. They may occasionally do the "Basenji yodel" which is so unique you may find yourself your pup will do it more than he/she actually does!

Basenjis are considered fairly healthy, but can be prone to a few health issues, some of which are uncommon. These dogs can suffer typical health problems like hip dysplasia, patellar luxation, hypothyroidism, and progressive retinal atrophy (PRA), but other, lesser-known ailments include immunoproliferative systemic intestinal disease (ISID), Fanconi syndrome, and umbilical hernias. Experts suggest that any new owners have their Basenjis thoroughly examined by a veterinarian, who can check for (and explain the details of) these rare issues.

It should be noted that Fanconi Syndrome is a fatal kidney disease that almost wiped out the breed in the 1980's. In fact, these dogs had to be imported from the Congo to replenish the breed around the world. Luckily, the hereditary disease can be detected via blood test!

Life expectancy for Basenjis is 10-12 years.