The Bandog can either be the general name for a type of guard dog, or a shortened description of the American Bandogge Mastiff. In both cases, Bandogs are extremely large and muscular, and have short-haired coats. Bandogs are intelligent, loyal, protective, and at times highly aggressive; they have fantastic watch- and guard dog abilities, but they are illegal to own in many areas. Bandogs require moderate care (little grooming, moderate training, and a lot of exercise), and are pretty healthy overall.

The Bandog is often considered a breed type rather than a specific purebred dog. In any case, Bandogs are members of the Working group, and have been used as fearsome guard dogs for centuries. Dogs of this type are unmatched in their guarding and protection abilities--but they can be extremely dangerous if not carefully trained and controlled; severe Bandog attacks are not uncommon. As such, it is vitally important that anyone considering Bandog ownership should acquire the dog only from a trusted, responsible breeder.

A few facts about Bandogs: they're large-sized (height averages 26 inches, and weight is around 110 pounds), with short-haired coats that come in a variety of colors. Here are some advantages and disadvantages to owning these powerful dogs:

The Bandog can be considered an umbrella breed type, but some use the term to describe the American Bandogge, which is also called the Swinford Bandog (named after U.S. veterinarian John Swinford, who was essential to the breed's development in the 1960s). Various Bulldog and Mastiff breeds have been crossed to develop these dogs, which can lend to the confusion over what a "true Bandog" specifically is. Whatever the case, the Bandog is a truly fearsome animal.

Fortunately (or unfortunately, depending on the situation), the typical Bandog has brains to match its incredible brawn. Dogs of this type are considered very intelligent, and are known for their intuition--especially when it comes to perceiving potential threats.

Bandogs are also considered the very best guard dogs known. One nickname for them is the "Silent Peacekeepers," in that they don't bark much at all--but they will neutralize nearly any threat, often without anyone knowing the threat even existed. Interestingly, they also socialize very well with children (especially if raised with them), and will protect kids from any and all harm.

Dogs of this type are incredibly strong, athletic, and agile. Owners are advised to give their Bandog at least an hour of exercise daily--and using a leash is an absolute must, unless the owner is fine with lawsuits!

As the Bandog is often considered a type rather than a specific breed, Bandog history is quite muddled. Guard dogs of this type have existed since at least the sixteenth century, if not longer. In 1576, the English author Abraham Fleming published a treatise called Of Englishe Dogges in which he described the "Bandogge" as a Mastiff type that was "huge, stubborn, ugly and eager." The Bandogge name was given because these dogs were often tied to posts or trees with leather bands; hence these "bande dogges" eventually became the Bandogs of modern times.

Through the centuries, "Bandog" usually referred to a guard dog type rather than a single breed. Though debate has long existed over what breeds make a true Bandog, in the nineteenth and twentieth centuries a "Bandog" became known as a crossbreed, usually of a Mastiff or Molosser dog with some breed of Bulldog. Few specific records or descriptions exist of these breeding histories, but some breeds known to be in Bandogs' gene pools include the Neapolitan Mastiff, the American Pit Bull Terrier, the English Mastiff, the American Bulldog, the Cane Corso, the Great Dane, the Fila Brasileiro, the Boerboel, and the rare Tosa Inu (Japanese Mastiff), among numerous others. Many varieties of these crossbreeds were developed, with some called Bandogs and others not, but they all shared similar genetic makeup and physical characteristics.

In the 1960's, American veterinarian John B. Swinford consolidated the Bandog gene pool somewhat. Beginning in 1964, Swinford began a selective breeding program in which he crossed various Mastiffs (most notably the English Mastiff) with American Pit Bull Terriers; his objective was to "create the ultimate guard dog," and his dogs became known as Swinford Bandogs. Unfortunately, in 1971 Swinford died before the Swinford Bandog could be established as a recognized breed.

Because of their wide gene pools, Bandogs can exist in a wide variety of both solid and patchy colors. These include yellow, black, various shades of brindle, gray, and fawn; blue Bandogs are fairly common, and red Bandogs exist as well. Many Bandogs' coats have one darker primary color and white as a secondary one. 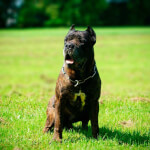 The Bandog is a large-sized breed. Height at the shoulders is 20-30 inches; Bandog weight is 75-125 pounds.

20-30 in
*Height is measured in inches from the front paws to the top of the shoulder while the dog is standing on all four legs.
75-125 lbs

Self-confident, intelligent, stable, protective, and at times extremely aggressive, the Bandog temperament is one of quiet power. Dogs of this breed type have a history of bull-baiting and competitive fighting, so they are absolute dangers if overly provoked--but they are typically calm, devoted, and fun-loving with their families. Socialization with humans and other animals (starting at puppyhood, if possible) is an absolute necessity for Bandogs; they can be very aggressive with strangers, especially if they feel threatened by them, so close supervision with unknown people is another must. Bandog attacks occur from time to time, so these dogs are banned in some parts of the world.

And when it comes to guard dog abilities, Bandogs are simply unmatched. They have low barking tendencies, so they won't necessarily alert anyone to intruders, but will instead quietly neutralize (and even injure or kill) any potential threat.

Bandogs are, on the whole, great with children--especially if raised with them. They are extremely social with humans they know, and dangerous around humans they don't; this loyalty extends to kids as well. Bandogs, along with some other breeds such as Bulldogs, are considered self-appointed "babysitters" around children of the family, because they are very trustworthy and protective, and treat kids (and even some--but not all--other pets) with affection and love.

Below are pictures and images of the Bandog. 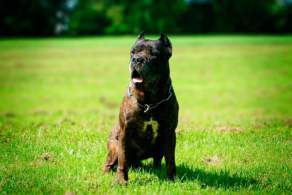 Bandogs, depending on the breed variation, are considered healthy dogs, but can suffer from ailments common to most large-sized breeds. These include hip and elbow dysplasia, bloat, and various skin issues. Obtaining your Bandog from a responsible breeder who has performed thorough health testing on the dog is highly recommended.

All breeders with 'Quality Breeder' recognition have met our Quality Breeder Requirements.
* Please note - we are not endorsed or affiliated with any of the breeders listed above. However, we do our best to only list reputable and established breeders.
Bandog
Breed Description
Breed History
Breed Colors
Breed Size
Breed Temperament
Breed Pictures
Breed Health
Explore
Dog Breeds
Dog Colors
Dog Names