The aussiedoodle is a hybrid dog breed which is the offspring of an Australian Shepherd and a Poodle. As a mixed breed the aussiedoodle will display physical and behavioral traits from both parent breeds. Not all aussiedoodles will receive equal traits from the parents, as some will have more poodle characteristics and others may have more Australian shepherd characteristics. This can lead to diversity between aussiedoodles (even in the same litter) and is a major reason why the breed is not accepted by many kennel clubs.

Below are the characteristics and traits of the aussiedoodle dog breed.

The aussiedoodle's size is dependent upon the size poodle used when breeding. Standard poodles will create a larger aussiedoodle while miniature poodles are used to produce a smaller aussiedoodle. Because of this, their size can range between 15 to 70 pounds.

Since the Poodle's coat is considered hypoallergenic, it is very possible that the aussiedoodle may inherit this gene from the Poodle parent. This makes the aussiedoodle a better choice for people with sensitive allergies, although the drawback is the coat may need frequent clipping and grooming to keep it clean and tangle free.

Since the aussiedoodle is a cross breed, it doesn't have a set history. The breed likely originated in the 1980's when hybrid dogs started to become popular.

The aussiedoodle is considered an adorable dog by many, and is one of the reasons for the breed's popularity. The breed comes in many different colors and patterns and the coat can have the characteristics of the Australian shepherd (long and straight) or resemble the Poodle (loose and curly). 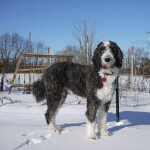 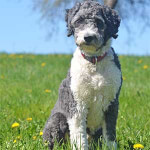 12-25 in
*Height is measured in inches from the front paws to the top of the shoulder while the dog is standing on all four legs.
25-70 lbs

Some breeders proclaim that, due to hybrid vigor, F1 Aussiedoodles are the only crossbreeds that should be produced. The multi-gen Aussiedoodle breeders, however, boast that breeding to create an "official" Aussiedoodle purebred is the way to go and that the F1b, F2, etc., do not possess the problems that the so-called purists purport. A brief generational breakdown follows:

1. The F1 Aussiedoodle, which is 50% each of the Australian Shepherd and the Poodle (either Toy, Miniature or Standard). The most unpredictable generation in regards to appearance and temperament.

2. The F1B Aussiedoodle coat and some other aspects can be controlled a bit more depending on whether the F1 Aussiedoodle is bred back to a Poodle (which is what most breeders will do) to promote the non-shedding, more curly coat, or to a Shepherd (which is what is rarely, if ever, done).

3. The F2 Aussiedoodle, which is produced when two F1s are mated, has a slightly higher chance than the F1 of inheriting genetic defects and illnesses. This is a necessary step toward that F7 generation that is the first generation that may be considered for inclusion in the purebred kennel clubs.

4. The F2B Aussiedoodle comes from breeding back an F1 to an F1B; the F3 is the result of breeding two F2s, and so on.

The aussiedoodle's temperament will be similar to the temperament of the Poodle and the Australian shepherd. Both parent breeds are intelligent, devoted to their family, and willing to please, so it is likely most aussiedoodles will share these traits. While it would be desirable for an aussiedoodle to have a mix of complementing traits from both parent breeds, it's not always the case. Poodle's and Australian Shepherds were bred for completely different purposes, so these instincts may or may not be inherited in aussiedoodles.

Aussiedoodles that inherit more Poodle traits will tend to show more poodle mannerisms and behavior. If your aussiedoodle inherits more poodle traits, you can expect a well rounded dog which is capable of excelling at many tasks and jobs. The dog will likely have a strong desire to swim and will enjoy endless games of fetch. They cope wonderfully with family and pets, but may be wary towards strangers or unwelcome guests.

Most aussiedoodles should do well with children. If the breed inherits strong herding instincts from the Australian Shepherd, it may have a tendency to herd children back towards the group if they begin to wonder off. This may seem cute, but the primary method of herding is to nip at the heels which can be intimidating for smaller kids. It is recommended to socialize aussiedoodles at a young age so they will be more well-rounded when around children.

Aussiedoodles generally get along with other pets (especially if they grow up with them). They may try to herd some of the pets, but early socialization can help prevent this behavior from becoming a habit in adulthood.

Below are pictures of the Aussiedoodle dog breed. 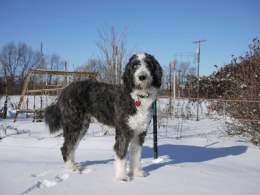 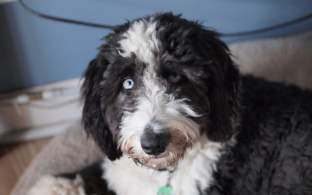 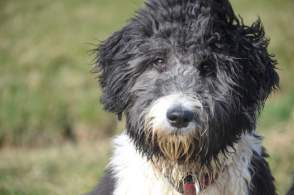 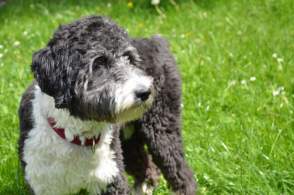 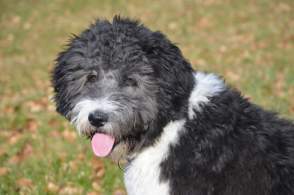 The aussiedoodle will likely be a medium to high maintenance dog. The breed has high energy, needs adequate mental stimulation, and has moderate grooming requirements. The maintenance requirements of the aussiedoodle may be too demanding for inexperienced or busy owners, so this should be taken into consideration when choosing a dog for your lifestyle.

The aussiedoodle will likely be a very energetic and active dog breed that will need moderate daily exercise. It is unlikely that they will reach their daily exercise needs by running around in a backyard and will need one to two walks daily.

Aussiedoodles should do well in apartments and small homes, as long as they are exercised regularly to meet their energy requirements. They can also cope well in large yards, but generally prefer to be close to their family if they aren't performing any type of job or task.

The aussiedoodle should be more cold tolerant than your average dog. However, they should be supplied with shelter and closely observed if left outside in cold temperatures to make sure they're comfortable. They can cope with heat, but it's recommended not to exercise them if it is especially hot since dogs can't cool themselves off as easily as people.

As a hybrid dog breed, the aussiedoodle should be healthier than its purebred parents (due to more genetic diversity). However, all dogs have the potential to develop health issues so it is important to make sure the breeder has ensured that both parents have been cleared of any unwanted health problems. With that being said, it is possible that health issues common in both parent breeds may be inherited by the aussiedoodle. These issues include:

The following dog breed registries and organizations recognize the Aussiedoodle as a dog breed:

All breeders with 'Quality Breeder' recognition have met our Quality Breeder Requirements.
* Please note - we are not endorsed or affiliated with any of the breeders listed above. However, we do our best to only list reputable and established breeders.
Aussiedoodle
Breed Description
Breed History
Breed Appearance
Breed Colors
Breed Size
Breed Temperament
Breed Pictures
Breed Exercise & Grooming
Breed Health
Aussiedoodle Care
Where to Get An Aussiedoodle
Aussiedoodle Pictures
Explore
Dog Breeds
Dog Colors
Dog Names