The akita is a large dog breed which was originally bred to guard nobility and royalty in Japan. The breed does not frighten easily and is known for not backing down and was also used in hunting big game such as bear, boar, and deer.

The akita is known for their stubbornness, so they may not be the best choice for a first time dog owner. They make a good family dog, but can be aggressive towards other dogs (especially if they are the same sex).

The Akita is a member of the Working group of breeds, and has been utilized as a guard dog and large-game hunter for centuries. These powerful, protective dogs are quite affectionate with and loyal to their families--and suspicious of (and often dangerously aggressive towards) everybody else. As such, Akitas are best suited for experienced owners in need of personal and/or property protection.

A few Akita facts: they're large-sized, with short- to medium-length, double-layered fur that comes in a wide variety of both solid and mixed colors. Here are some advantages and drawbacks to owning this mighty breed:

Since the breed was originally used for guarding it should come to no surprise that akitas are large dog breeds. Adults can reach 26 inches from ground to shoulder and can weigh up to 130 pounds. Their size and strength combined with their stubbornness can make it difficult for novice owners to control their akita which is why early obedience training is necessary.

As a guard dog, an akita will protect their family with their life regardless of the threat. With this in mind it is important to consider the safety of others when guests are over. The breed will do well with children it has been raised with, but proper socialization with strangers and other pets is necessary to keep the dog well rounded.

Akita history has its beginnings in Japan--specifically in the Akita Prefecture, a mountainous region in the northern part of the nation. Akita dogs existed there as far back as the 1600s, when they guarded Japanese royalty and hunted large game like bears and boar.

But it wasn't until the early twentieth century that Akitas started gaining worldwide notice. First was the legend of Hachiko, an Akita owned by a college professor in Shibuya, a Tokyo suburb. Beginning in 1923 when he was a puppy, Hachiko accompanied the professor to and from the Shibuya train station each day for the professor's commute into the city. But two years later, Hachiko made his customary trip to the station to meet his master after work--only the professor never arrived; he had died of a brain hemorrhage at work that day. Even so, Hachiko, though he went to live with the professor's relatives, traveled to the station every day for the next nine years to wait for his master. Hachiko's loyalty became known across Japan (and eventually worldwide), and a bronze statue of the dog was erected at the Shibuya station shortly before Hachiko's death in 1934.

Shortly thereafter, the Akita breed gained even more infamy when deaf-mute American author/activist Helen Keller visited Japan. She learned much about the breed during her trip (which included a visit to the Hachiko statue in Shibuya), and was given her own Akita--a pup named Kamikaze--to take with her back to the States. Sadly, Kamikaze died of distemper shortly after Keller's return, so the Japanese government arranged to send her another one--Kamikaze's litter-mate, a dog named Kenzan. Keller grew to love the breed, and called the Akita "an angel in fur" in her later writings.

During World War II, the Akita, like many breeds, grew scarce in number. Fortunately the breed's population has steadily increased in recent decades. In modern times, two variants of Akitas--the Japanese and the American--have emerged, and fierce debate rages over whether they are separate breeds.

Akitas are large, powerful, and solid in overall appearance--one reason they make such great guard dogs.

The breed's body is typically a bit greater in length than in height. The head is strong, triangular, and often compared to that of a bear ("bear-head Akita" is a common description); the eyes are fairly small, almond-shaped, and normally brown (though Akitas with blue eyes are possible); the ears are fairly large, triangular, and usually stand erect. The chest is deep, the shoulders extremely muscular, legs medium-length and straight, and the tail is bushy, of medium length, and curled over the back.

The typical Akita coat is medium-length, thick, and double-layered, in a wide variety of colors. Long-haired Akitas do exist, but are rare (and highly prized).

Akita coats come in a wide variety of colors, and both solid and multi-colored patterns are possible. Solid white or black Akitas are quite common, as are brown/white, black/white, and tri-colored. Brindle Akitas are typical as well, with black, brown, red, and even silver as the primary color in the brindle pattern. 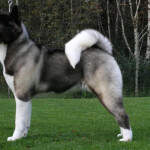 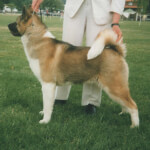 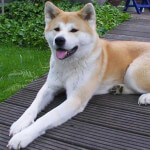 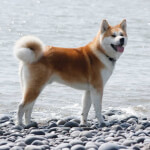 Akita size: these dogs are large, solid, and powerful. Akita weight is typically 70-130 pounds; height at the shoulders is 24-28 inches. Some Akitas can be even larger, reaching up to 32 inches in height and 160 pounds in weight.

24-28 in
*Height is measured in inches from the front paws to the top of the shoulder while the dog is standing on all four legs.
70-130 lbs

In the past half-century, this breed has become known in two varieties: the Japanese Akita (also known as the Akita Inu, where Inu is Japanese for "dog") and the American Akita. Disagreement continues around the world over whether Akitas should be divided into two distinct breeds (the Japanese and American) or simply two variants of one breed. Currently, kennel clubs in only the U.S. and Canada recognize both variations as one breed; elsewhere, American Akitas and Akita Inus are considered separate breeds.

One distinct difference between the two variations is coat coloring. Japanese Akitas typically exist only in brindle, white, and various shades of red and/or fawn. The American variety, meanwhile, exists in a much wider variety of colors, including brown, black, and even blue, in both solid and multi-colored patterns.

Size difference is another distinction. The American Akita is typically larger (an average of 27 inches in height and 110 pounds in weight)--chiefly because the first Akitas in the U.S. were brought by U.S. servicemen returning after World War II, and the soldiers preferred the heavier, more solidly built dogs.

Protective, intelligent, alert, playful, and at times stubborn and highly aggressive, the Akita temperament is one of loyalty and confidence. Akitas are considered excellent guard dogs for good reason: they're devoted to their family members, and distrustful of everyone else. The most important variable in determining the Akita personality is socialization--and the earlier, the better! Akitas that are raised with humans and other pets are typically fun-loving and well-balanced (though still protective); mature Akitas introduced to a new home environment, meanwhile, can be unpredictable--which can spell grave danger.

As to training, Akitas are a mixed bag. They're highly intelligent and can learn tasks well, but can be stubborn and willful, so they will need a trainer who uses firm, incredibly consistent methods.

One area Akitas need zero training in, however, is protection! These dogs will instinctively neutralize any potential threat--but those instincts can in fact be dangerous to unknown people, so they will need constant supervision around others.

A typical Akita is purely a family dog--especially if it's a member of a household from puppyhood. Akitas raised with kids will be affectionate and playful with them, but these dogs still need supervision (particularly with younger children); rough horseplay or unwanted affection could cause the Akita's aggressive instincts to take over, which can be disastrous.

An Akita, more than most any other breed, is best suited for a "one-pet household." These dogs are dominant and aggressive towards other dogs, and Akitas and cats simply do not mix. If an Akita is raised with other animals, it might tolerate them--but the moment another pet does something the Akita doesn't like, the dog is likely to attack and injure or kill the other animal.

Below are pictures of the Akita dog breed. 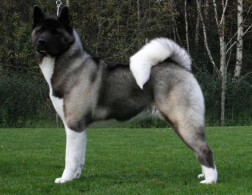 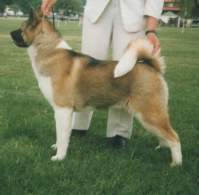 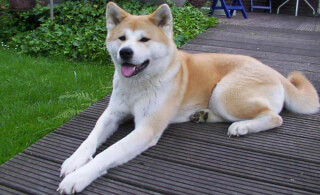 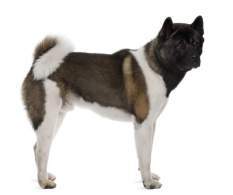 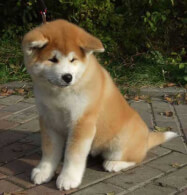 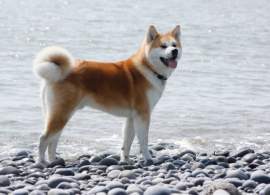 Owning an Akita requires a special sort of mindset. Breed members don't bark much, nor are they too destructive if left alone--but any instance of a stranger entering an Akita's home could have potentially deadly consequences. Akita owners must be mindful of this, and train their dogs as best they can (starting as early in the dog's life as possible) to be respectful and calm around unknown people. And don't worry--an Akita will still retain its protective instincts, regardless of whether it's trained otherwise.

Akitas can live both indoors and out--and it's possibly a good idea to have these dogs capable of doing both, in case strangers visit for extended periods. But it's extremely important that any outdoor spaces are securely enclosed, because an Akita on the loose is, as expected, potentially deadly.

Keep in mind, though, that owners who allow their Akitas to spend time inside their homes will need to invest in a good vacuum cleaner! Akitas are not hypoallergenic, and shed quite a bit--and during shedding season, they shed extremely heavily.

There's very little about National Akita Day except for the online forums that mention it without stating too much or, often, even what it is. But it is on March 8, and it's based on the very thing that rarely mentions it: online chatter, the buzz on forums, and other virtual places where the Akita Inu is the focus of the site, forum, or thread. No nation, government, or kennel club appears to recognize this "holiday," and you won't get a day of work, a free doggy meal, or probably even a knowing glance if you mention this it in the real world.

Overall, Akitas are very healthy. The biggest problem is cancer which, according to a health survey conducted by the Akita Club health survey, is one of two leading causes of death in this breed. The other often fatal condition is bloat, and Akitas are the breed said to be second from the top that are most likely to get it. Together, these two ailments kill 42% of all Akitas.

Other possible health issues include:

The average life span of a typical Akita Inu or American Akita is 11 to 14 years.

The following dog breed registries and organizations recognize the Akita as a dog breed: