The Telomian is a rare purebred dog which is the only native Malaysian dog breed that has been bred outside of Malaysia. Telomians are small athletic dogs with short coats and were originally bred by the indigenous people of Malaysia to help control pests (mice, snakes, and other jungle critters) in the forests of Malaysia. Since they were bred from dingoes and other feral dogs, they are not as domesticated as other dog breeds. Because of this it is recommended that owners begin bonding with Telomian puppies early to help the dog socialization skills with people.

Below are some quick specs regarding the Telomian breed.

The Telomian was bred to be highly effective at killing common house pests. Since they were bred in the jungles of Malaysia, their natural instincts are to hunt and kill mice and snakes that are in the home or around the property of his/her owners. Due to their strong prey drive, Telomians will make chasing a critter his/her top priority, even if it is against the will of their owner.

Telomians are also known for alerting their family of any possible threats. This trait is likely developed from generations of alerting their owners of any nearby poisonous animals, snakes, and dangerous animals in the jungles of Malaysia. Another unique trait to the breed is the use of its paws. Telomians have excellent paw control and will use them to hold objects, food, and toys. Many believe this trait is directly related to the breed's learned skill of climbing the short 6-8 foot ladders to their owner's home in Malaysia (it was considered foolish to build your home on the jungle floor due to the high risk of snakes and wild animals entering your home during the night hours).

The Telomian was originally bred by the Orang Asli to aid in hunting and to control small vermin in the jungles of Malaysia. The Telomian would enter the house before it's owners and would alert them if any snakes, vermin, or critters were present. Vermin control was a common concern for the indigenous people as the jungles contained a large population of mice, snakes, and pests. It was common for people to build their huts 6-8 feet off the ground to help reduce the frequency of pests. This forced the Telomian to adapt to climbing the ladders which helped the breed develop extraordinary paw control which is still common in the breed today. It is not uncommon to see Telomians confidently hold toys, food, and even open doors with their paws.

Due to the rareness of this breed, they were not discovered until 1963 when Dr. Orville Elliot found them near the Telom river (which is what the breed is named after). A pair of Telomians were brought to the United States after discovery and a second pair was imported in 1973. It is believed that all Telomians in North America are directly descended from the original two pairs imported in the 1960's and 1970's.

Telomians were the first and are still the only Malaysian dog breed to be bred outside of Malaysia.

The Telomian is a small dog breed with a short smooth coat. They resemble many other common wild dogs such as the Dingo. Their small size makes them quick and agile (ideal for catching vermin). Telomians will have a black or blue tongue (similar to the chow chow and other ancient Asian dog breeds).

The most common colors are tan & white and black & white, but the Telomian can be any shade of sable with white. Some Telomians may also have a black mask. Telomians with larger color patches are favored. 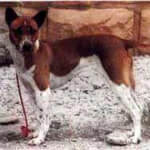 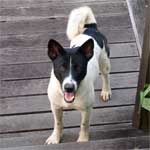 Telomians are small to small-medium sized dogs and are built similar to Pariah dogs. On average, Telomians are 15-19 inches tall (from the ground to their shoulders) and weigh 18-28 lbs.

15-19 in
*Height is measured in inches from the front paws to the top of the shoulder while the dog is standing on all four legs.
18-28 lbs

Telomians are extremely intelligent and adaptable dogs. They have a strong prey instinct and enjoy running and playing so they enjoy games that require this skill such as searching for a treat and any type of chasing game like fetch, frisbees, chasing balls, etc.

The Telomian is an extremely alert breed. They have an unusually high intuition for danger (most likely a trait developed living the jungles of Malaysia) and will alert their owner of any possible threat that makes them feel uneasy. This trait makes them an extremely effective watch dog.

Telomians have a unique howling sound instead of a bark (similar to the Basenji and the New Guinea Singing Dog).
Since Telomians were bred from wild dogs, they aren't as fully domesticated as many modern dogs. Because of this, it's important that puppies have as much interaction time with people as possible (starting at four to five weeks of age). Telomians who are introduced to people too late will remain independent and distant from their owners and will be unable to adjust to new situations.

Once a Telomian is socialized they become very loving dogs with a strong desire to please their master. Their charming personality and obedience will win the heart of every Telomian owner. If not, then their unique ability to make faces and use their paws as hands will set them apart from other dogs.

Unlike other dogs, Telomians can fend for themselves and will often catch small prey to eat if they are unfed by their masters.

Telomians are good companions for children as long as the dog has been fully socialized. Since the breed isn't as domesticated as other dog breeds, Telomian puppies require heavy bonding with people to encourage them to be sociable with people.

Socialized Telomians are very considerate and are gentle. This combined with their high energy and eagerness to play makes them a tireless playmate for children.

Socialized Telomians are good with other pets. However, since they have a strong prey instinct they may chase pets that are smaller than them.

By instinct the Telomian is weary of strangers, especially if the stranger is an unexpected surprise. Since the Telomian is a small dog breed, they generally pose no danger, but they will yodel/sing/howl to alert you of a possible threat (since they cannot bark).

Below are pictures of the Telomian dog breed. 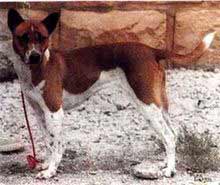 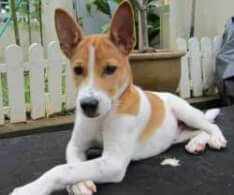 The Telomian is considered a low maintenance dog. They only main concern is their high amount of energy requires ample play time and daily walks. Their high intelligence can get them into trouble if they are left alone with too much energy.

Once a week brushing will rid the Telomians coat of dead hair and will keep it shiny. They will need to be bathed only when necessary to keep them odor free and clean.

As a high energy dog, they will need to be taken on one to two walks daily. Telomians may also need toys and games to keep them mentally entertained as their high intelligence can lead them to find destructive ways to entertain themselves.

Telomians can adapt to most living environments and can live in apartments as long as they receive enough exercise to control their high energy. While they don't bark, they do howl which may be an issue in smaller apartments.

Telomians were bred in the jungles of Malaysia and are most comfortable in climates similar to their natural habitat (between 70 and 90 degrees fahrenheit). However, the telomian is a very adaptable breed and may be comfortable in cooler climates as long as they have shelter and protection from the elements.

Since the Telomian is a rare dog breed, little is known about potential health issues.

The following dog breed registries and organizations recognize the Telomian as a dog breed: