Originally bred to protect livestock and sheep, the Great Pyrenees makes an excellent guard dog for families and property even today. The breed's trademark is their elegant white coat, which helped the breed blend into sheep herds making it more difficult for predators.

Great Pyrenees makes an excellent family dog, but may be too much to handle for inexperienced dog owners. Like many guard dog breeds, great Pyrenees are free thinkers which makes the breed more difficult to train, and great Pyrenees need to be trained. Untrained great Pyrenees quickly become uncontrollable which can be a disaster considering the breed can often exceed 160 pounds in weight.

The Great Pyrenees is a Livestock Guardian Dog (LGD). They are huge dogs and they are serious about their work. They can make good family pets for those who have big homes, lots of outdoor space and experience with mountain dogs. These dogs are definitely not for first-time dog owners for a variety of behavior reasons. They will cause problems for people who don't understand the nature of ancient mountain dog breeds. They are not attack dogs, however, and while they do very well to defend flocks from large carnivorous predators, they tend to use a variety of methods to prevent a physical confrontation.

Here are some Great Pyrenees facts:

The great Pyrenees is considered a giant dog breed. Males can often exceed 160 pounds and can be as tall as 32 inches from ground to shoulder. Their large size was necessary to protect animals and property.

Even though the great Pyrenees is a guard dog, they should never be shy or aggressive without reason. Normal behavior for the breed can be described as calm, gentle, and serious. The breed is very courageous and will protect their family with their life. The breed is wonderful and very gentle with children and does well with other animals.

The great Pyrenees are considered to be average shedders in colder climates and heavy shedders in warm climates. On average, owners can expect to spend at least 30 minutes per week keeping the great Pyrenees' coat free of tangles and clean. Their coat is self-cleaning, so baths only need to be given when the coat develops an odor. They have low exercise needs for a dog of their size and can meet their energy requirements with a 20-30 minute walk each day.

The Great Pyrenees' origin is lost to the ancient mists of time long, but there are many ancient writings that note the dog at length. This breed is thought to have come from sometime between 1800 and 1000 B.C. One of the first documented mentions of this mountain sheepdog is the Roman author Varro. In his "De re rustica" (written in 37 B.C), he wrote that the dogs were essential for guarding livestock and described the dog. He also noted that the dog's white coat made it easy to distinguish from wolves and other predators at night.

The history of the Great Pyrenees was one that may have been taken for granted for some time after Varro's observations. Toward the end of the middle ages, however, the dog was again observed in detail and a number of records exist from those centuries. In the 15th century, French writings describe the breed and its uses. These large dogs had long been appreciated by shepherds whose work in the mountains was treacherous in many ways. The French aristocracy had taken a liking to the dogs and the breed became favored by The Grand Dauphin. They were initially known as around the Chateau of Lourdes as guardians. While serving King Louis XIV, Dauphin decreed them as the Royal Dog of France in 1675. This made the dogs very popular and highly sought by French nobles.

By the 17th century, the dogs had been exported to Newfoundland. They were cross-bred with black English Retrievers, and the result was the Newfoundland Landseer dog. In the early 19th century, the dogs were introduced to the United States by the French general, Marquis de Lafayette. He delivered two of the dogs to an American author, J.S. Skinner, who later mentioned the dogs in his 1845 book, "The Dog and the Sportsman."

It took nearly another century, to 1933, before the American Kennel Club formally recognized the breed.

The Great Pyrenees is much like the mountains invoked by this breed's name: massive and white like the snow. While generally large, they are not considered a giant breed. Great Pyrns are extremely deft in most any type of terrain, and what makes them so surprisingly agile is practically invisible: their double dew claws.

Their wedge-shaped head is home to deceptively calm, almond-shaped eyes. Their ears may be medium or even small, the powerful jaw has a scissors bite, and the skull will be a bit rounded. The face and head features will nevertheless be proportionate with the rest of the body. All the legs are straight, and the rear legs are exceptionally strong in the upper parts. They have small, compact paws. The Great Pyrenees feet and toes are heavily protected by significant padding. The double dewclaws on the rear should be present. These are attached by bone to the dog's legs, and they are instrumental in balance and movement. The tail should be carried low at the base yet wheel up and over the back a bit like a plume and end in a crook. This big, beautiful dog is wrapped in a weather-resistant double coat.

Because most of these dogs tend to be seen via dog shows, some people may nickname this breed the Great White Pyrenees. They are primarily white, but it is not uncommon for Pyrns to be much darker as puppies. They may have a badger markings or mask that are shades of tan or even gray or red. The base of the tail — and in some case their backs — may have some of the color markings too. Typically, these badger marks will fade a bit or disappear as the dog matures. This may take some time, perhaps even up to 2 or 3 years. There are even reports that some Great Pyrenees have their badger face or marks return once they have been an adult for a few years.

One thing is for sure, however: there are no black Great Pyrenees. There may be some with very dark colors, but if someone says they have a black Pyrenean mountain dog, it is not a Great Pyrenees but a mixed breed or similar-looking dog. 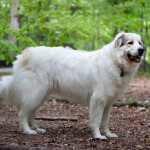 Some say that the Great Pyrenees is a giant breed and that these dogs are some of the largest in the world. Others say that it's the coat that makes the dog look big but that the dog is not really that large. Some of these dogs can weigh a lot, and it's not too uncommon for some to weigh as much as 150 pounds. Still, the average weight of a Pyrn depends on the sex. Females tend to be 85 to 90 pounds and males are much larger around 100 to 120. There is a fair amount of difference in their heights too. Full-grown Great Pyrenees females are 25 to 29 inches and males average 27 to 32 inches.

25-32 in
*Height is measured in inches from the front paws to the top of the shoulder while the dog is standing on all four legs.
85-160 lbs

There are basically no types of the Great Pyrenees. There are variations of badger markings such as face-only and face-and-tail as well as different shades of those marks, but nothing formal. Some people say that there are short-haired Great Pyrenees, but such a dog is sure to have been crossed with another breed such as an Anatolian Shepherd Dog which is another mountain dog with double dew claws. There are said to be no black Great Pyrs either, and that such a dog will have another breed's bloodline from a recent crossing.

As for miniature or giant Great Pyrenees, a mini (or other similar names like dwarf, etc.) is either a runt or a hybrid, and a "giant" describes all Great Pyrns.

The Great Pyrenees temperament is that of a gentle giant that is nevertheless ready for defense when needed. The characteristics of these dogs are intelligence, patience and the ability to distinguish friend from foe. They are very independent but remarkably loyal to those whom they love. They'll bark to warn long before they leap to attack, and if they attack, it's for a good reason.

Some of the Great Pyrenees traits can be frustrating, however. They will sometimes refuse to obey when called. They might stop when walking and refuse to move further. (This is said to often happen when the weather is hot, and they may do it to cool down.) They may also bark a lot, and this may be due to any number of issues that you should investigate.

Ultimately, the personality of this breed is an amicable one who will be protective when needed and will love you to the end.

Due to their size, many people might ask, Are Great Pyrenees good with kids? The answer is Yes — and Sort of. Children from your family and who have been properly socialized should have no problem, even when laughing, playing and romping around. They won't be seen as masters, however, so don't be surprised when commands from your kids are met with ambivalence.

Kids that your Great Pyr doesn't know, however, might present problems. As these dogs are highly protective of family members, they may view other kids playing with "their" kids to be a threat. They are great family dogs who tend to have protection as their number one priority, and you should always closely supervise your Pyr when other kids are playing nearby.

A Great Pyrenees and cats is a great combination. Kittens will love having a Great Pyr around, and he'll protect them as well as let them test his mettle with their claws in his thick, practically impenetrable coat. These dogs don't have a strong prey drive, and they prefer to preserve their energy, so chasing cats or most any other non-canine pet is very unlikely. They should get along with most other dogs, but they may exhibit some aggression toward dogs of the same sex. The Great Pyrenees temperament with other dogs in the household with which they are socialized should present no real problems.

Below are pictures of the Great Pyrenees dog breed. 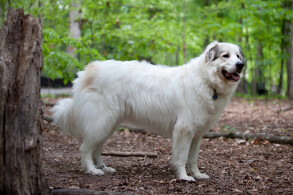 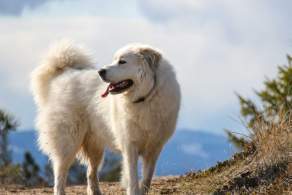 Great Pyrs as pets are not prone to separation anxiety. They tend to not bark unless it is necessary, and if they do, you should look into it. They are not so much unfriendly as aloof. They take their time in assessing strangers and situations, and unless overtly threatened, will tend to do little more than bark.

These dogs are not meant for apartments, and even small homes with small yards might not be enough. They are not accustomed to hot climates either. The ideal home is a large one where it gets cold fairly regularly. If it snows, that's even better!

The Great Pyrenees is not hypoallergenic, but they don't shed too much either despite having double-layered coats. As pets, you will find that they typically have two annual coat blowouts, and this is when they will leave hair everywhere. Owning a Great Pyrenees as an indoor dog may mean a bit more shedding than usual, but not too much.

Large dog breeds tend to have exaggerated skeletal and weight problems, especially if they are no longer in their basic natural habitats where they tend to be very active. These dogs were kept localized and pure for so long that they have a great many genetic issues. Because they are big even as puppies, you must be very careful to not injure them while their bones develop, which can take 3-4 years.

Here are some of the health issues that can afflict Great Pyrns:

These Great Pyrenees' average lifespan is 10 to 12 years and is typical for dogs this size.

The following dog breed registries and organizations recognize the Great Pyrenees as a dog breed: