The Ariegeois is a relatively new breed of scenthound originating from the Ariege region of France. Primarily used for hare coursing and driving games to the guns lying in wait, they are versatile enough to adapt to many types or terrain and hunt solo or in packs. Members of this breed make serene family dogs while indoors but need plenty of outdoor activity daily. This is why a physically active owner with a large yard or property is recommended. Ariegeois are known for being even tempered around people and getting along famously with other canines. They are low maintenance and quite healthy.

This medium-sized scenthound hails from Southern France and, originating in 1912, is thought to have scenthound (Grand Bleu de Gascogne, Grand Gascon-Saintongeois) along with other Briquet dog ancestry. They are quite adaptable to different terrains and are able to hunt singularly or in a pack. Primarily, they are utilized for coursing hare and driving prey towards the hunters waiting with their guns. These dogs are also said to be capable of hunting wild boar and deer as well as able to be trained to work with hunters that are not their masters. The ideal match for this canine (if not a hunter) is a physically active person or family with a house and large yard. Consider the following Ariegeois facts:

The Ariegeois is a medium sized, muscular hound standing 19-23 inches at the shoulder; physically sturdy, they have strong chests and straight backs. They also have long, narrow and slightly domed heads with long, floppy ears. The coat is short, fine and mostly white with black markings, plus tan markings on the cheeks and above the eyes; there can be mottling within the white of the coat. The tail is medium-long, tapering to a point. Below is additional Ariegeois information regarding training, exercise and socialization:

These quick-witted hunting companions are easily trained due to their cheerful demeanor and affection for their humans. They are so adept at figuring things out and so non-aggressive that they have even been said to be trained to hunt with unfamiliar partners.

Members of this breed are known for their friendliness towards other dogs since they are both singular and pack hunters. Prey instincts may remain, especially to small, furry critters resembling rabbits so early socialization is necessary to even attempt cohabitation with cats. Ariegeois don't make good watch dogs due to their non aggressive temperament. They are known to be calm and trustworthy with children and have plenty of affection for their families.

Ariegeois will certainly be happy to become fat and lazy if that is the example you set for them. They much prefer outdoor daily exercise on a large property or fenced yard; apartments are not acceptable for this breed. Coursing and driving game may be their favorite activities but as long as you are a physically active owner they should receive enough stimulation.

Below are pictures and images of the Ariegeois dog breed. 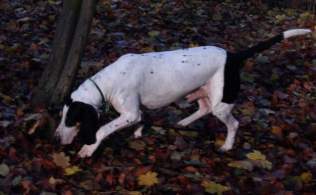 Due to the relatively short time this breed has been around (since 1912), there isn't much information available about any particular health problems. Rumored to have contributed to the bloodline of this breed are the Grand Bleu de Gascogne and Grand Gascon-Saintongeois so it may be worth a look into the common health concerns of these breeds. Choosing a reputable breeder and not skipping any routine vet appointments can help detect and prevent many issues. Your Ariegeois will likely have a lifespan of around 12-14 years.

The following dog breed registries and organizations recognize the Ariegeois as a dog breed: